Within the EU Project HELMETH, Efficiency of Methane Gas Production from Renewable Electricity Increased to more than 75 Percent due to Thermal Linking of Chemical Processes 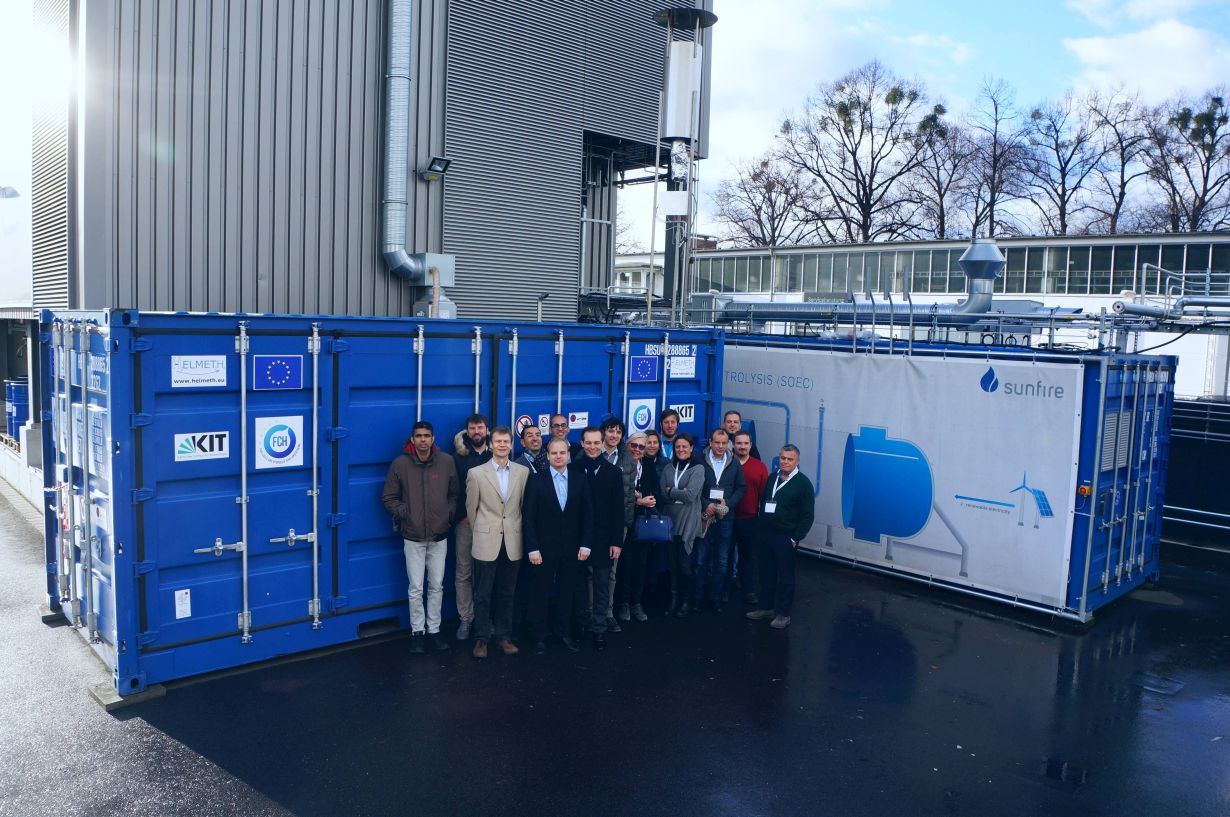 The demonstrator facility of the HELMETH project combines methanation (left) and electrolysis (right) with an efficiency of 76 percent. (Photo: sunfire GmbH)

The natural gas network may serve as a buffer for weather-dependent electricity from the wind and sun. This requires economically efficient processes to use electricity for the production of chemical energy carriers. The EU project HELMETH coordinated by KIT has now made an important step. It has demonstrated that high-temperature electrolysis and methanation can be combined in a power-to-gas process with an efficiency of more than 75 percent.

“For the first time, we used the synergies between electrolysis and methanation and reached an efficiency that exceeds that of standard technologies by about 20%,” says Dimosthenis Trimis of KIT, coordinator of the HELMETH EU project. “Thanks to the large scope of disciplines covered by our consortium, we managed to reach an important milestone for mastering the energy transition.”

A conventional industrial power-to-gas facility converts about 54% of the electric energy of renewable power into chemical energy of methane fuel. The prototype of the HELMETH EU project that fits into two conventional sea freight containers of about 6 m length each reached an efficiency of 76% in the final measurements. This gives hope for reaching an efficiency of 80% on the industrial scale. In parallel, economic efficiency and the climate balance of the new technology were studied. “These high efficiencies make the power-to-gas technology a very promising one,” Trimis says. Efficiencies of more than 80% appear to be possible, provided that the limiting process steps identified in HELMETH will be addressed in future research.

A big potential leveraged in HELMETH was the optimal use of process heat from methanation to cover heat consumption of electrolysis. High-temperature electrolysis at about 800°C and high pressure has thermodynamic advantages that cause the efficiency to increase. During electrolysis, the power is used first to decompose water into oxygen and the energy carrier hydrogen. Then, hydrogen reacts with carbon dioxide or carbon monoxide to methane, the main constituent of natural gas, with heat being released. The advantage of methane over hydrogen consists in the fact that it can be fed into the existing natural gas intrastructure without any limitations or any further processing. Feeding of pure hydrogen into the network may possibly require bigger adaptation efforts in transportation and use, as the energy density and chemical properties differ considerably. The natural gas substitute produced within the HELMETH project always contained hydrogen concentrations below 2 vol.%. Hence, it could be fed into the entire German natural gas network without any restrictions.

The HELMETH project had a duration of nearly four years and a budget of about EUR 3.8 million. The project was funded with EUR 2.5 million from the European Union’s 7th Framework Programme (FP7/2007-2013) for the Fuel Cells and Hydrogen Joint Technology Initiative. HELMETH is the acronym of “Integrated High-Temperature ELectrolysis and METHanation for Effective Power to Gas Conversion.“ The project partners are KIT, the University of Turin, the Technical University of Athens, the companies Sunfire GmbH and EthosEnergy Italia SPA, the European Research Institute of Catalysis ERIC, and the DVGW – Deutscher Verein des Gas- und Wasserfaches e.V. (German Technical and Scientific Association for Gas and Water.)