Floor parquetings are typically found in living rooms. But microstructured parquetings, or rather tessellations, may occur in materials as well. Materials with tessellations can, for example, be characterized by an outstanding electrical conductivity, a special light reflection, or an extreme mechanical strength. Selective generation of such structures requires large molecular building blocks which mostly are not compatible with the conventional manufacturing processes. In Nature Chemistry, researchers of KIT and TUM explain how molecules form complex tessellations through self-organization.

The team of Karlsruhe Institute of Technology (KIT) and Technische Universität München (TUM) has discovered a reaction path which produces exotic layers with semiregular structures from simple two-dimensional networks. Such materials are interesting because they often possess extraordinary properties. In the process, simple organic molecules are combined into larger components which form the complex semiregular patterns.

Only a few basic geometric shapes lend themselves to covering a surface without overlaps or gaps using uniformly shaped tiles: Triangles, rectangles, and hexagons. Considerably more and significantly more complex but still regular patterns are possible with two or more tile shapes. These are the so-called Archimedean tessellations or tilings. 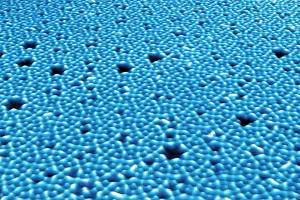 Materials can also exhibit tiling characteristics. Such structures are often associated with very special and desirable properties, for example outstanding electrical conductivity, special light reflection, or extreme mechanical strength. It is, however, difficult to manufacture such materials. Their production requires large molecular building blocks that are not compatible with traditional manufacturing processes.

An international team led by Professors Florian Klappenberger and Johannes Barth at the Chair of Experimental Physics of TUM, as well as Professor Mario Ruben at Karlsruhe Institute of Technology, have now made a breakthrough in a class of supramolecular networks: They got organic molecules to combine into larger building blocks with a complex tiling formed in a self-organized manner.

As a starting compound, they used ethynyl iodophenanthrene, which is an easy-to-handle organic molecule comprising three coupled carbon rings with an iodine and an alkyne end. On a silver substrate, this molecule forms a regular network with large hexagonal meshes. Heat treatment then sets in motion a series of chemical processes, producing a novel, significantly larger building block which then forms a complex layer with small hexagonal, rectangular and triangular pores virtually automatically and self-organized. In the language of geometry, this pattern is referred to as a semiregular 3.4.6.4 tessellation.

The working group headed  by Mario Ruben at KIT’s  Institute of  Nanotechnology was responsible for the tailored selective synthesis and characterization of multinuclear molecular complexes serving as tessellation building blocks. “We have discovered a completely new approach to producing complex materials from simple organic building blocks,” Klappenberger and Ruben summarize. “This is important for being able to synthesize materials with specific novel and extreme characteristics. These results also contribute to a better understanding of the spontaneous appearance (emergence) of complexity in chemical and biological systems.”

The scanning tunneling microscopy measurements conducted at TUM clearly show that the molecular reorganization involves many reactions that would normally result in numerous by-products. In the new process, however, the by-products are recycled, meaning that the overall process runs with great economy of atoms to arrive at the desired end-product. In further experiments, the researchers found out how this happens.

Using X-ray spectroscopy measurements at the electron storage ring BESSY II of the “Helmholtz-Zentrum Berlin”, the researchers were able to decipher how iodine splits from the starting product, hydrogen atoms move to new positions, and the alkyne groups capture a silver atom. By means of the silver atom, two starting building blocks bind together to a new, larger building block. These new building blocks then form the observed complex pore structure.

The research was funded by Deutsche Forschungsgemeinschaft (in the context of the Excellence Cluster Munich Center for Advanced Photonics, the Priority Program SPP 1459, the Transregio TR 88 3MET C5, and the DFG project KL 2294/3) and the European Research Council (ERC Advanced Grant MolArt). Synthesis and characterization of the molecules were done at the Karlsruhe Nano Micro Facility.