Science: Metamaterial with a Twist 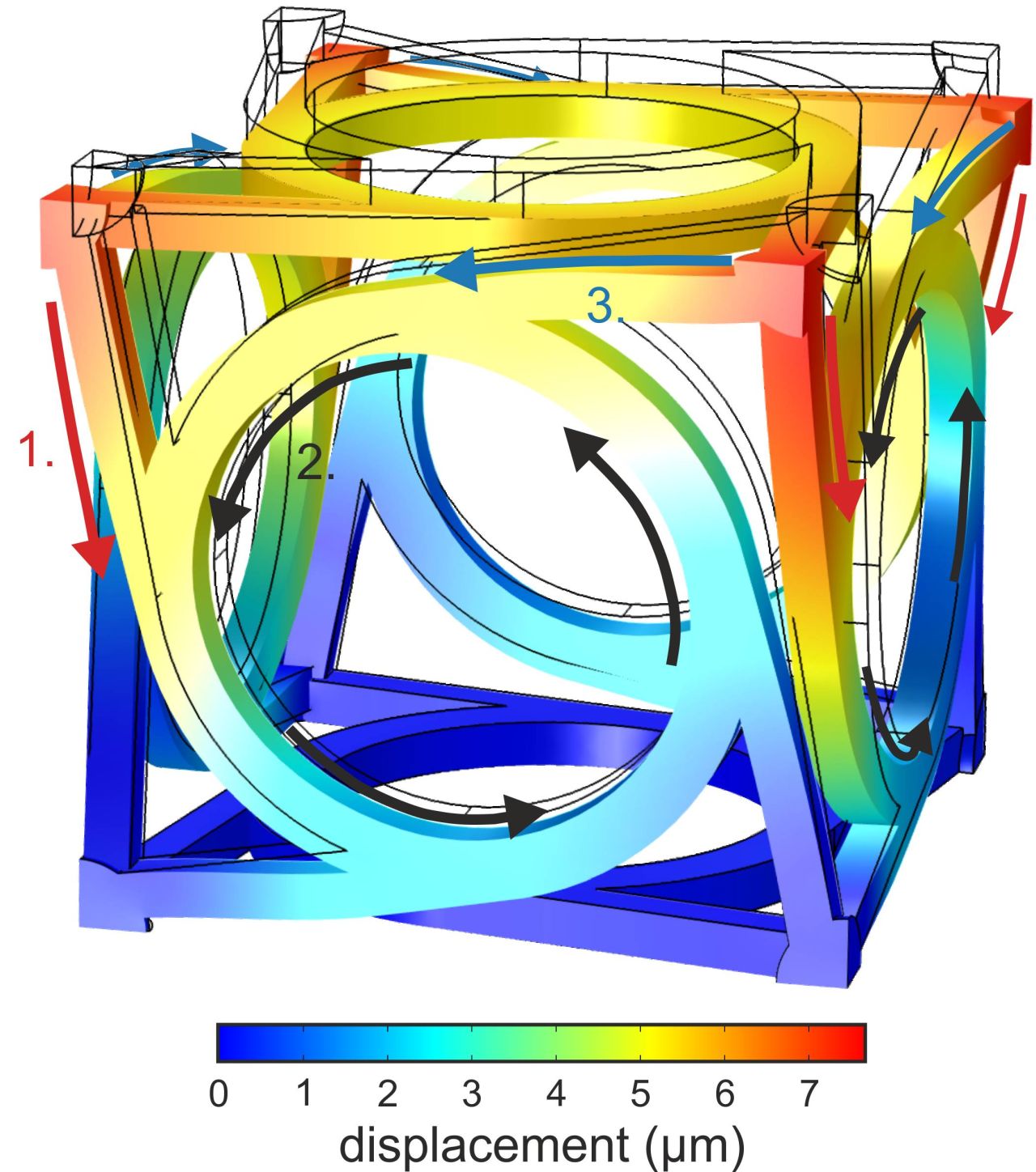 Forces from above are transmitted to the vertical ring structures via bars. The rotation of the rings exerts forces onto the corners of the horizontal planes of the cube. (T. Frenzel/KIT)

Using 3D printers for the microrange, researchers of KIT have succeeded in creating a metamaterial from cubic building blocks that responds to compression forces by a rotation. Usually, this can only be achieved by transmission using a crankshaft, for instance. The sophisticated design of bars and ring structures and the underlying mathematics are now presented in the latest issue of Science.

“If a force is exerted from above onto a material, the latter deforms in various ways. It may be bulged, compressed, or bent,” says Martin Wegener, Professor of the Institute of Applied Physics and Director of the Institute of Nanotechnology of KIT. “According to the valid rules of mechanics, however, it will not rotate,” he adds. His staff member Tobias Frenzel and colleagues, however, have now succeeded in designing a filigree cubic structure that reacts to loading by a rotation around its axis.

“By means of a computer simulation, we first developed a design with this new mechanical property that has not been described so far,” Frenzel, the first author of the study, explains. “Our calculations revealed that the desired behavior is shown by a complex chiral structure, i.e. a structure that cannot be mapped to its mirror image, similar to the left and the right hand.”

The filigree cubes calculated by Frenzel and his team consist of bars and rings that are connected to each other in a certain pattern. “The arms that connect the ring structures with the corners of the cube move vertically downwards under load. This movement leads to a rotation of the rings,” Frenzel explains. “These rotation movements, in turn, transmit forces to the corners of the horizontal planes of the cube, such that the complete structure starts to twist around its axis.” Towers of up to 500 chiral cubic structures rotated around their axis under load. Achiral structures do not exhibit this behavior. (T. Frenzel/KIT)

Then, the team produced towers of the above cubic structures of variable sizes, strengths, and pieces using a 3D microprinting method established at KIT. The edge length of the cubes ranged from 100 to 500 µm. The researchers built towers of 4 to 500 cubes and 2 mm height. To check their theory, they also built towers of achiral cubes, i.e. cubes that can be mapped to their mirror image.

The scientists found that towers assembled from chiral blocks started to rotate around their axis under the impact of force. “We measured a rotation by up to two degrees per percent of deformation,” Frenzel says. The towers made of achiral cubic structures did not exhibit this rotation. The researchers also found that the stiffness of the towers increased with the number of cubes, although the dimensions of the individual components decreased proportionally.

According to Tobias Frenzel, there is still a far way to go to application. Work was inspired by the team’s previous studies of elastic “invisibility cloaks.” These might be used to buffer shock waves of earthquakes or divert them around historic buildings.