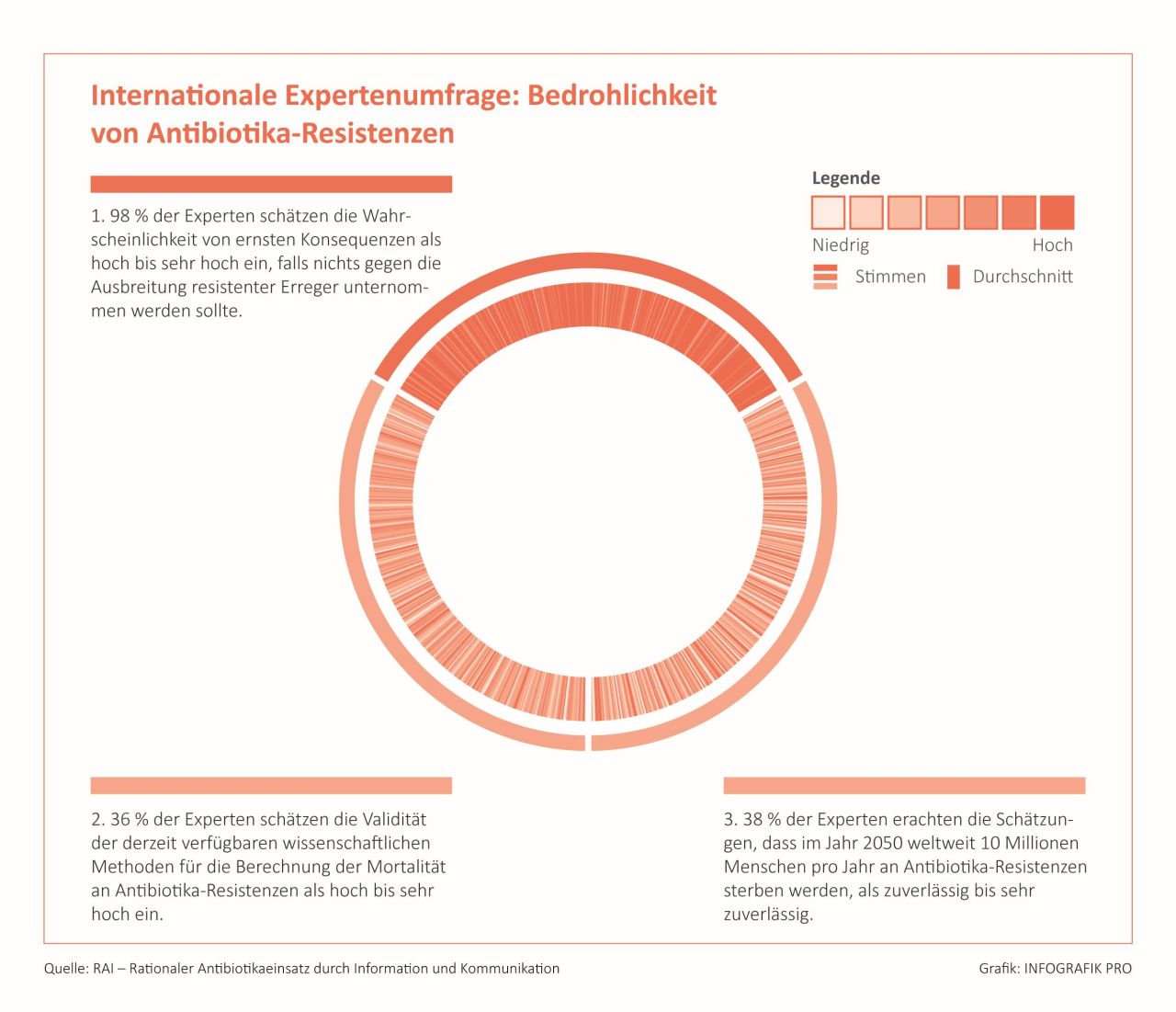 Nearly 100 percent of the experts interviewed consider the threat by antibiotic resistances to be high (Diagram: KIT/RAI)

According to a survey among researchers, it is difficult to quantify the true  extent of the hazards of antibiotic resistances to humankind. The survey conducted by Freie Universität Berlin and Karlsruhe Institute of Technology (KIT) will be introduced on the occasion of the international World Antibiotic Awareness Week on Sunday, November 19. It reveals that among researchers worldwide, there is broad agreement on the fact that antibiotic resistances are serious health hazards. The  number of related deaths, however, cannot be determined reliably.

The British O’Neill Commission (https://amr-review.org/) expects ten million deaths each year from 2050 onwards. Only a minority of the experts interviewed believe such spectacular estimates to be reliable. For his survey, Markus Lehmkuhl, Professor for Science Communication in Digital Media at KIT and Freie Universität Berlin, conducted online interviews with 375 researchers worldwide. The survey focused on researchers who, in the past three years, have published relevant studies in international journals. The World Antibiotic Awareness Week is called in by international organizations such as the World Health Organization (WHO) to raise the public awareness of antibiotic resistance. “The uncertainty about the number of deaths is due to a broad disagreement among researchers as to whether the number of deaths can be determined by means of the available scientific methods,” Lehmkuhl says. One third of the interviewees believe the reliability of the respective methods to be low or very low, another third think that it is high or very high, and the remaining third do not want to commit themselves.

The researchers interviewed agree that countermeasures are required urgently. Almost all survey participants (98.4 percent) fear serious or very serious consequences if nothing is done against the propagation of resistant pathogens. From the point of view of the experts, the two most effective measures would be to reduce use of antibiotics in medicine and to improve hygiene in hospitals. It is important, moreover, to reduce use of antibiotics in livestock farming and to develop vaccines, alternative therapies and, eventually, new agents against resistant bacteria.

In view of the above challenges, the survey participants do not deem antibiotic resistance to be inadequately addressed in the public sphere: “Almost two thirds believe that dramatic wording e.g., talking about a “global disaster” or the “onset of a post-antibiotic age”, are more or less justified,” Lehmkuhl explains and summarizes: “Although everybody is convinced that antibiotic resistances are extremely dangerous, methodological problems make it very difficult to provide reliable figures. To draw attention to this important area of action nevertheless, most of the experts interviewed think it justified to use an alarming vocabulary to make the media react.” This, however, bears the risk of attempts to outdo each other. “The voice of those reporting the highest numbers of deaths and drawing up the darkest scenarios will finally be heard.”

The survey is part of the joint research project “Rationaler Antibiotikaeinsatz durch Information und Kommunikation – RAI (rational use of antibiotics through information and communication), which is  being coordinated by Charité - Universitätsmedizin Berlin and is funded by the Federal Ministry of Education and Research. The relevant interdisciplinary research is dedicated to the issues of using antibiotics and developing resistances. The subproject conducted by Professor Lehmkuhl, moreover, aims to create a survey tool by means of which a maximum number of experts can be interviewed on one subject e.g., by journalists. ”Meanwhile, our knowledge level is too high and too sophisticated to be represented by individual researchers,” Lehmkuhl says. He fancies to follow the example of climate research and tap the expertise of the global scientific community. The 375 experts interviewed on the subject of antibiotics represent about 2500 researchers worldwide who, in the past three years, have published relevant studies on antibiotic resistance in international journals. This is 15 percent of all researchers working in that area. To be able to conduct such surveys also on other topics, the KIT, in the joint research project RAI, cooperates with the Science Media Center in Cologne. It is planned to establish a method by means of which all experts from specific subject areas can contribute selectively to public discourse e.g., via a web portal that can be used by journalists to interview the members of the global community of experts.