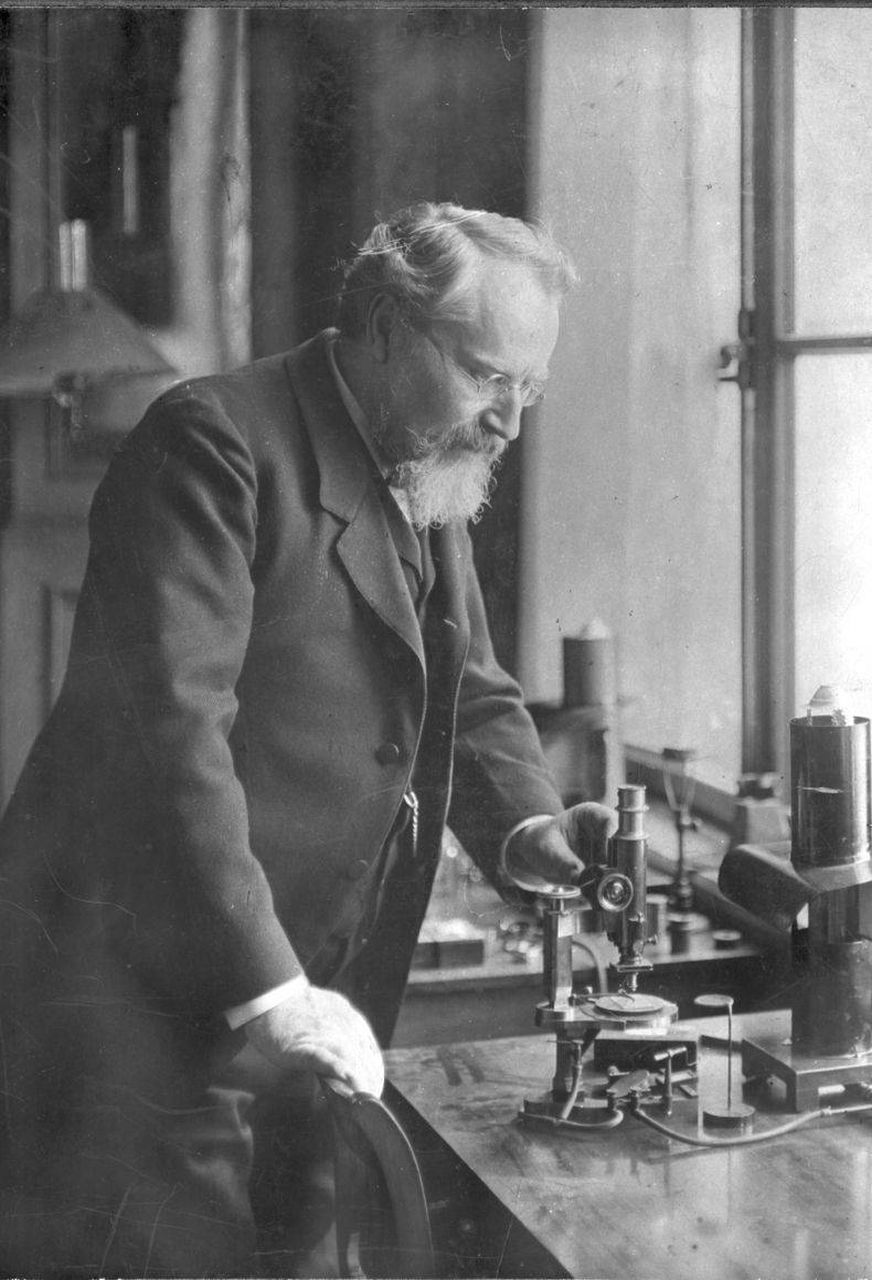 Otto Lehmann at his laboratory. By studying liquid crystals, the physicist opened up the basis of today’s flat and energy-efficient LCDs. (Photo: KIT Archive 27058, 8)

Karlsruhe Institute of Technology (KIT) is granted the “IEEE Milestone Otto Lehmann” by the renowned Institute of Electrical and Electronics Engineers (IEEE). With this, the International Association of Engineers honors physicist Otto Lehmann (1855 – 1922) and his research into liquid crystals in Karlsruhe. Lehmann’s findings are the basis of today’s flat and energy-efficient displays. The ceremony and unveiling of the IEEE Milestone will take place on Wednesday, October 11, 2017 at 11.00 am at the Hertz-Hörsaal on Campus South of KIT.

After the “IEEE Milestone Heinrich Hertz”, this is the second honor of an internationally outstanding researcher working in Karlsruhe within the IEEE Milestone Program. The Program is to acknowledge pioneer discoveries and inventions in electrical engineering and information technology. The Milestone is a bronze plaque of 30 x 45 cm in size. It will be located on KIT’s Campus South in the Ehrenhof, where Otto Lehmann’s former laboratory was located.

In spring 1889, Otto Lehmann was appointed successor of Heinrich Hertz at the former Technical University of Karlsruhe, the predecessor institution of Universität Karlsruhe (TH) and today’s KIT. His research focused on the physics of molecules and their interaction during the melting and solidification of matter. Lehmann studied the phenomenon that certain substances exhibit properties of a liquid and a solid at the same time. In his publication “Über fließende Krystalle” (On flowing crystals) in the Journal for Physical Chemistry in 1889, he reported his first experimental results and physical interpretations on “liquid crystals,” as they are called today. In the following decades, Otto Lehmann intensively studied liquid crystals and developed the instruments required for their investigation, such as the heated crystallization microscope that enabled a large number of observations with minimum time and material expenditure. The physicist was repeatedly nominated for the Nobel Prize, last in his year of death in 1922.

With his work, Otto Lehmann paved the way for today’s liquid crystal technology, such as liquid crystal displays (LCDs) and other applications. Low-cost and energy-efficient LCDs can be found in many technical devices today, such as laptops, smartphones, navigation systems, flat screens, and displays of household appliances. From 1973 to 1997, Professors Dieter A. Mlynski and Peter M. Knoll conducted research and lectured in the area of liquid crystal displays. In 1997, they established the Otto Lehmann Foundation together with Professor Sigmar Wittig, the then Rector of Universität Karlsruhe (TH). In 2015, they submitted their proposal for the IEEE Milestone Otto Lehmann.

With about 425,000 members in more than 160 countries, the IEEE is the largest professional association of electrical and electronics engineers in the world. Its registered office is located in New York City. Since 1977, the “IEEE Milestone Program” has been honoring globally outstanding discoveries and inventions dating back more than 25 years and serving the benefit of humanity.

Welcome and Opening of the Ceremony

Ceremonial Speech of the IEEE President-Elect

Lecture on Otto Lehmann, His Life, His Work, and His Heritage