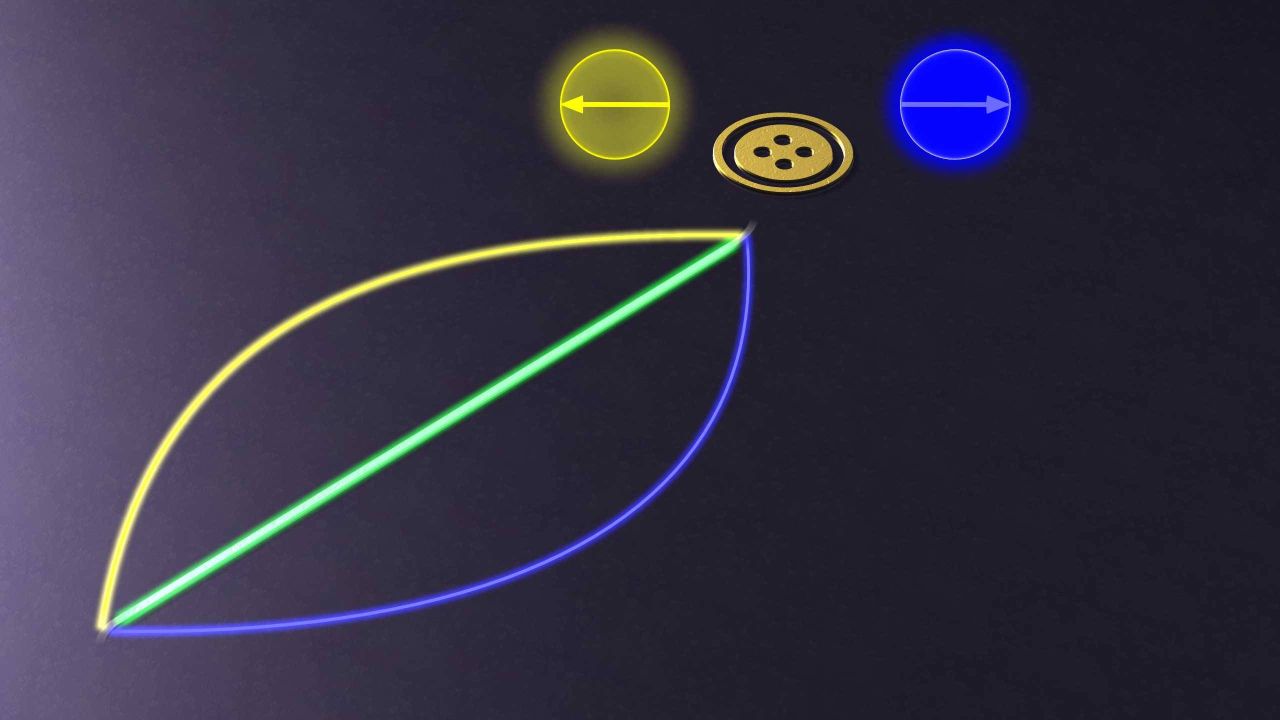 Contrary to classical bits, quantum bits can assume two states at the same time: Right and left, yellow and blue, zero and one. (Photo: KIT)

Hurricanes, traffic jams, demographic development – to predict the effect of such events, computer simulations are required. Many processes in nature, however, are so complicated that conventional computers fail. Quantum simulators may solve this problem. One of the basic phenomena in nature is the interaction between light and matter in photosynthesis. Physicists of Karlsruhe Institute of Technology (KIT) have now made a big step towards quantum mechanics understanding of plant metabolism. This is reported in the Nature Communications journal.

“A quantum simulator is the preliminary stage of a quantum computer. Contrary to a quantum computer, however, it is not able to make any calculations, but designed for the solution of a certain problem,” Jochen Braumüller of KIT’s Physikalisches Institut (Institute of Physics) says. As the high efficiency of the process of mass and energy conversion of plants with the help of light cannot be understood completely with classical physical theories, researchers like Braumüller use a quantum model. Together with scientists of the Institut für Theoretische Festkörperphysik (TFP, Institute for Theoretical Solid-State Physics), he demonstrated for the first time in an experiment that quantum simulations of the interaction between light and matter - as a basis of photosynthesis and, hence, our life - work in principle.

The interaction between light and matter in photosynthesis, for instance when, sunlight shines on a leaf, can be described as an interaction of photons of light with the atoms of matter on the microscopic level. The high efficiency of this mechanism of nearly 100% suggests that it is subject to rules of quantum physics, which is difficult to simulate with classical computers and simple bits. In that case, information is represented by a switch that can store information as zero or one. Quantum bits, by contrast, are able to assume the states of zero and one at the same time according to quantum physics rules. Hence, quantum computers or the simpler quantum simulators can solve the problem more quickly and efficiently.

Braumüller and his co-authors have now developed one of the first functioning components for a quantum simulator of light-matter interaction: Superconducting circuits as quantum bits represent the atoms, i.e. matter, while electromagnetic resonators represent the photons, i.e. light. The physicists succeeded in producing an effect with the quantum bit and the resonator assuming two opposite states at the same time. “Qubit and resonator are coupled,” says Michael Marthaler of KIT’s TFP. “This also is the reason for the exponentially improved calculation capacity compared to classical computers.” Fulfilling of this fundamental principle of quantum mechanics has demonstrated feasibility of analog quantum simulation with superconducting circuits, the researchers say.

As a next step, they plan to extend their system by many other building blocks. “Classical simulation of this extended system would take longer than the age of the universe,” says Martin Weides, who has been heading a working group at KIT’s Physikalisches Institut since 2015. If the planned quantum mechanics simulation will be successful, this will be a “milestone on the way towards a universal quantum computer.”

In the experiment the matter is represented by a superconducting quantum bit (Qubit) in the form of two concentric electrodes, and the light by a standing excitation in the microwave resonator, visualized by a meandering electrical conductor. The Qubit can assume the states 0, 1 or superimpositions of both states. In normal light-matter interaction, the energy oscillates periodically between matter and light. By increasing the coupling between light-matter, both the quantum bit and the resonator can simultaneously be in two opposing states. The blocks of light and material, which are then strongly entangled with one another, and their effects can only be tested experimentally by analogous quantum stimulation. '