On the Way to Promotion into the Logistics League

KIT Researchers Have Equipped Transport Robots with Team Spirit – In the Driverless Transport System, They Now Interact as in a Modern Football Team 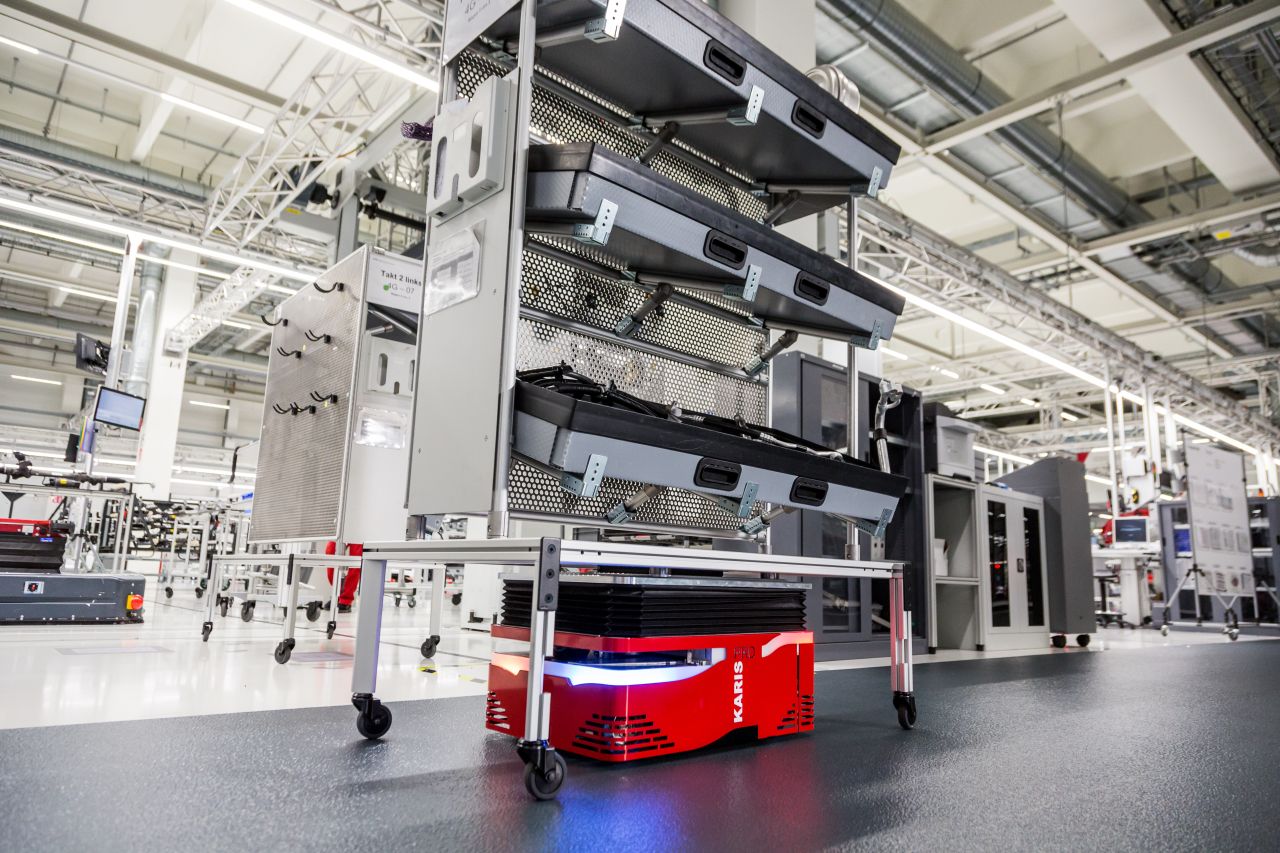 Today’s football teams do not rely on individual artists and heroes, but on the performance of the team. Based on common rules of conduct, individual players observe, communicate, and make decisions. This is exactly the way in which the Karis Pro intralogistics system works. It was developed by scientists of Karlsruhe Institute of Technology (KIT) and the University of Freiburg, in cooperation with ten industry partners.

Similar to a top football team, the individual actors decide on the moves with which they will reach the best possible result. But here, no balls have to be kicked into goals. Instead, boxes, shelves, and pallets have to be moved by small transport robots.

Every transport robot can load or unload material, plan paths, move along them, and avoid suddenly appearing obstacles. Every unit can carry up to 250 kg of load. Up to four units can combine and move a mass of one ton in weight together. In addition, the robots are connected by radio and communicate about their own states or exchange information on their routes and contracts. As in football, smooth and constant interaction is required for the swarm intelligence to work. In a practical test, ten robots in the field interacted perfectly. In simulations, researchers even operated several hundred units. “The logistics challenge is that systems constantly have to adapt to new tasks in changing environments,” Kai Furmans, Head of the Institute for Materials Handling and Logistics (IFL), says. Karis Pro can be used in a transmission plant with heavy load carriers as well as at mail-order companies.

Even without an opposing team, the IFL staff had to solve a number of problems to train the team of robots in logistics tiki-taka. To fulfill wishes of customers, up-to-date production facilities have to be changeable. An important criterion for success is flexibility. “Karis Pro can be taken into operation rapidly and easily without changing the local infrastructure. It independently updates map data,” Project Head Andreas Trenkle, IFL, explains.

The system is designed such that every robot can transport both boxes and shelves. Several units together can move even larger goods, such as pallets. If transport orders arrive, the robots decide which part of the team is suited best for the next order. When choosing the movement paths, the multi-robot navigation system does not only consider the position, but also the planned actions of the other robots and prevents them from mutually denying space. When transporting big and heavy loads, safety distances and driving speeds are adapted independently, such that human team members are not endangered. As the robots scan their environment with laser scanners, markers on objects or guiding lines on the floor are no longer needed. If a transport robot detects changes in its environment, it communicates this to the other robots. A central control is not required. Starting points and destinations can be changed easily by the staff. In this way, the system can be adapted rapidly to the transport of a variety of goods and to new working areas.

The system has already been tested at Bosch in Feuerbach and Audi Sport in Heilbronn and proved to be fit. The research project was funded by the Federal Ministry of Education and Research. Now, the transport professionals look forward to their use in industry.

More information, videos, and the final report can be found at www.karispro.de (in German only).