Studying the Asian Monsoon with a High-Altitude Aircraft 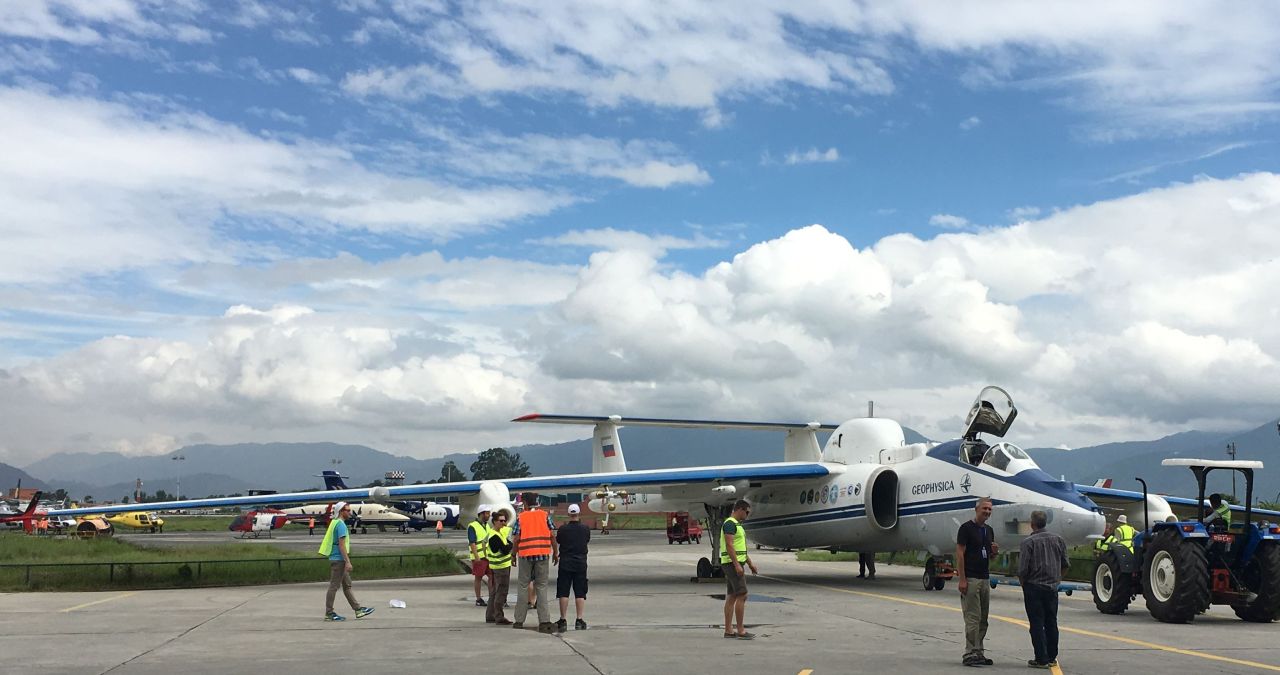 The Geophysica high-altitude aircraft will take the researchers up into the “highest levels” of the monsoon. (Photo: Christof Piesch, KIT)

The Asian monsoon is one of the Earth’s most dynamic and most energetic weather systems. In Nepal, scientists from all over Europe are now studying the upper levels of the monsoon system for the first time. The results will help better understand the global climate system. Researchers of Karlsruhe Institute of Technology (KIT) participate with the GLORIA remote sensing instrument to measure highly resolved distributions of various trace gases at the upper edge of monsoon circulation. The measurement campaign is part of the StratoClim project coordinated by the Alfred Wegener Institute, Helmholtz Centre for Polar and Marine Research (AWI).

During our summer, the Asian monsoon affects weather patterns over the entire Northern hemisphere. It acts like an enormous elevator, pumping vast amounts of air from the surface up to levels above 16 kilometers altitude. From there, monsoon air freely enters the stratosphere, the top layer of the atmosphere that contains the ozone layer. Once in the stratosphere, monsoon air spreads globally and persists for years. Satellite images show a thin cloud of aerosols, small droplets or dust particles suspended in air, directly above the monsoon region. It extends from the Arabian Peninsula to the Eastern coast of China.

Aerosols may have a warming or cooling effect on climate, depending on their composition and how they interact with cloud formation processes. This climate effect of aerosols is deemed one of the largest uncertainties in predictions of climate changes. Composition and origin of the aerosol cloud above the monsoon and processes causing its formation are among the big secrets of climate research. Hence, it is also unknown how the monsoon will respond to changes in emissions of pollutants or to climate change. Within the StratoClim project, an international team of scientists, hence, studies the composition of the air spreading in the tropopause region and stra-tosphere after transport by the monsoon.

For this purpose, nine measurement flights will be made by the Geophysica Russian high-altitude aircraft from Kathmandu. Among the instruments on board of the aircraft is GLORIA that was jointly developed by KIT and Forschungszentrum Jülich (FZJ). The infrared spectrometer analyzes altitude distribution of various trace gases along the flight path. Particular attention will be paid to ammonia, a chemical compound of nitrogen and hydrogen that is produced mainly by agriculture, such as livestock farming or use of fertilizers. Last year, the researchers for the first time detected ammonia at this altitude between 12 and 15 km. The current campaign will now enable studies of far increased precision. “Ammonia is decisively involved in the formation of aerosol particles. North India and China are regions where emissions due to intensive agriculture are generally high. Our measurements, however, have not revealed ammonia at this altitude in any other region,” Michael Höpfner of KIT’s Institute for Meteorology and Climate Research says. “This indicates that the monsoon plays an important role in ammonia formation. It suggests that ammonia is not washed out completely when the air ascends in monsoon circulation and, hence, enters the upper troposphere.” GLORIA presently is the only instrument that can measure ammonia at these altitudes. It also is the prototype for AtmoSat, a joint satellite project of KIT and FZJ. In early July, this project was rated as outstanding by the German Council of Science and Humanities.

During the mission in the air spaces of Nepal, India, and Bangladesh, the Geophysica aircraft carries 25 specially developed scientific instruments to altitudes above 20 km – about twice as high as normal aircraft can fly. Measurements by research balloons launched from Nepal, Bangladesh, China, India, and Palau will complement the campaign that will extend to mid-August 2017. “To understand how the monsoon will respond to anthropogenic emissions of pollutants and climate changes obviously is of crucial importance to the countries in Asia directly affected by it. But as the monsoon drives weather patterns around the world and affects the composition of the stratosphere globally, this research will also improve our understanding of climate processes worldwide and in our latitudes,” summarizes Markus Rex, project leader of AWI, the importance of this research for Europe.

The StratoClim (Stratospheric and Upper Tropospheric Processes for Better Climate Predictions) research project is funded by the European Union. Its goal is to better understand key climate processes in the upper troposphere and stratosphere to enable more reliable predictions of climate change. More than 30 research institutions and universities coordinated by the Alfred Wegener Institute, Helmholtz Centre for Polar and Marine Research, are contributing to the project.