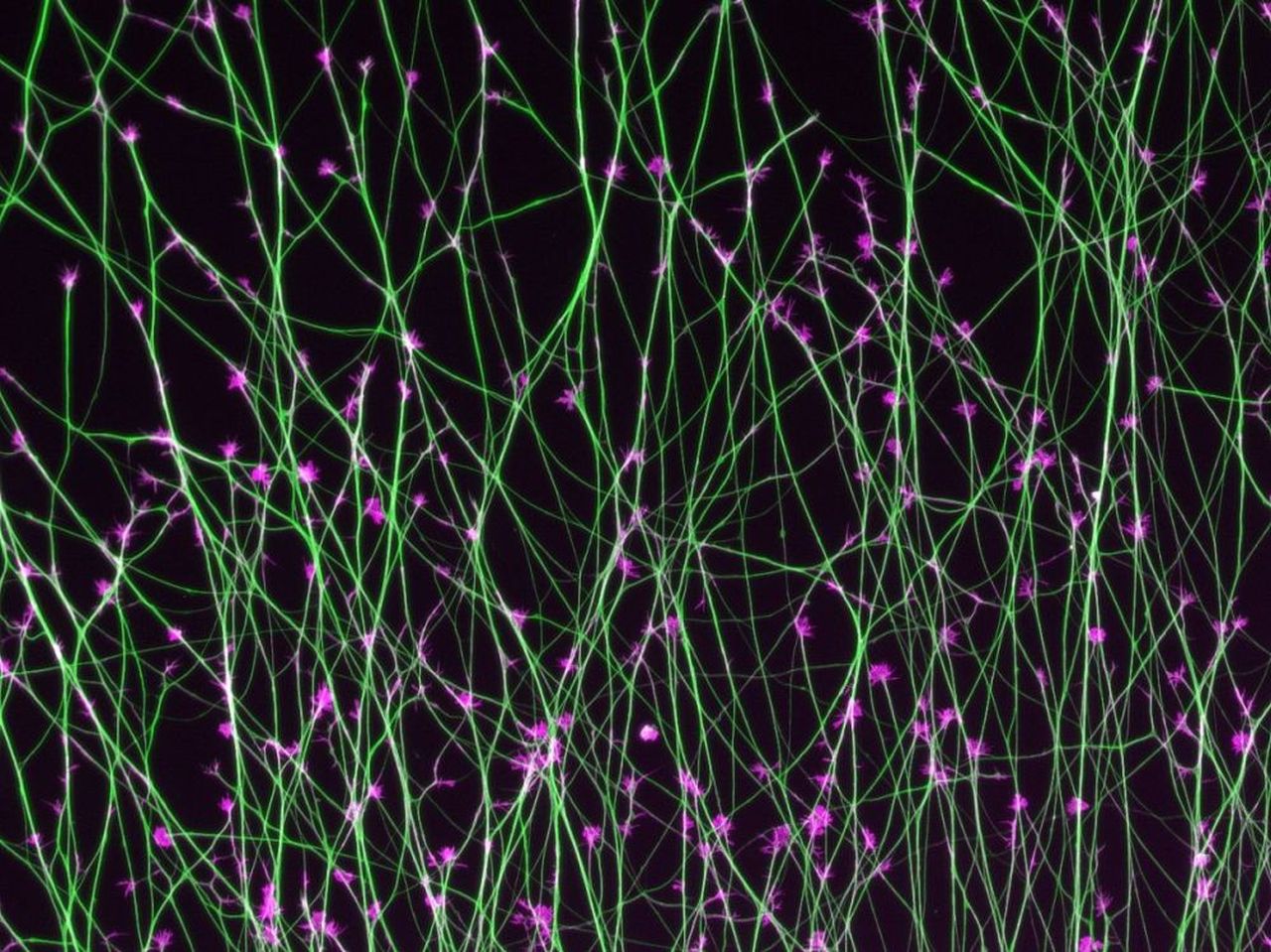 Embryonal brain development: Axons (green) of retina neurons read biochemical signals by means of a growth cone (magenta) equipped with molecular antennas and guide them to targets to interconnect the visual system of the brain. (Photo: KIT, Weth)

The human brain contains roughly 100 billion neurons. Information among them is transmitted via a complex network of nerve fibers. Hardwiring of most of this network takes place before birth according to a genetic blueprint, that is without external influences playing a role. Researchers of Karlsruhe Institute of Technology (KIT) have now found out more about how the navigation system guiding the axons during growth works. This is reported in the eLife magazine.

Total length of the nerve fiber network in the brain is approximately 500,000 km, more than the distance between the earth and the moon. Growth of the nerve fibers is controlled by a navigation system to prevent incorrect hardwiring. But how exactly do the nerve fibers find their target region during growth? “This is similar to autonomous driving in road traffic,” says Franco Weth of the Cell and Neural Biology Division of the Zoological Institute. Vehicles exchange information with each other and with signal transmitters at the roadside to reach their destination. In case of nerve fibers, sensor molecules at their ends serve as antennas. With them, they receive guiding signals in the form of proteins that are positioned along the way, in the target area, and on other fibers crossing the path. Having arrived at the target, axons form interconnections with other neurons, the synapses.

An example of such hardwiring is the connection between retina and brain, Weth says. Nearly one million nerve fibers reach the visual regions via the visual nerve. Genetically pre-programmed “neural hardwiring” causes the pixels to be reproduced one-to-one similar to a projection and, thus, enables a newborn child to see and process an image. This vital capability has developed by evolution of our species and does not have to be acquired by own experience. “Only few synapses of our brain are hardwired by learning,” Weth points out.

Surprisingly, the axons’ sensitivity to incoming signals of their protein navigation system decreases during the travel. “Still, information has to be read out precisely for the axons to find their target,” Weth and his colleagues wondered. The solution: “The axons indeed are desensitized for all types of signals guiding them, but they surprisingly preserve the ratio of signal strengths to each other,” Weth says. In the end, the target is characterized by a certain ratio of several signals rather than by the intensity of a single signal. Thanks to this refined coupling of sensitivities, the axonal navigation system manages the conflict between reliability and variability of signals. This type of coupled signal regulation is highly unusual in biology. “Although you quickly cease to notice the smell of the perfume of the person opposite you, this does not mean that you no longer smell the coffee you are drinking at the moment. But this is what happens in the brain.”

Researchers do not yet know why navigation of the axons is desensitized contrary to the naïve expectation that a strong signal will most certainly guide them to their target. “We presume that it is a strategy to save energy, because signal transmission needs energy,” Weth says. Actually, nature is striving for disorder.” Establishing order consumes energy. This is something we know. Nothing in biology is more ordered than the hardwiring of our brain. Only when nature minimizes hardwiring expenditure, can it achieve the top performance required to equip us with this ‘cognition computer’.”

With their findings, the researchers also contribute to better understanding diseases caused by hardwiring errors prior to birth. Among these diseases are the Tourette syndrome, autism, or schizophrenia.