Winemakers Lose Billions of Dollars Every Year due to Natural Disasters 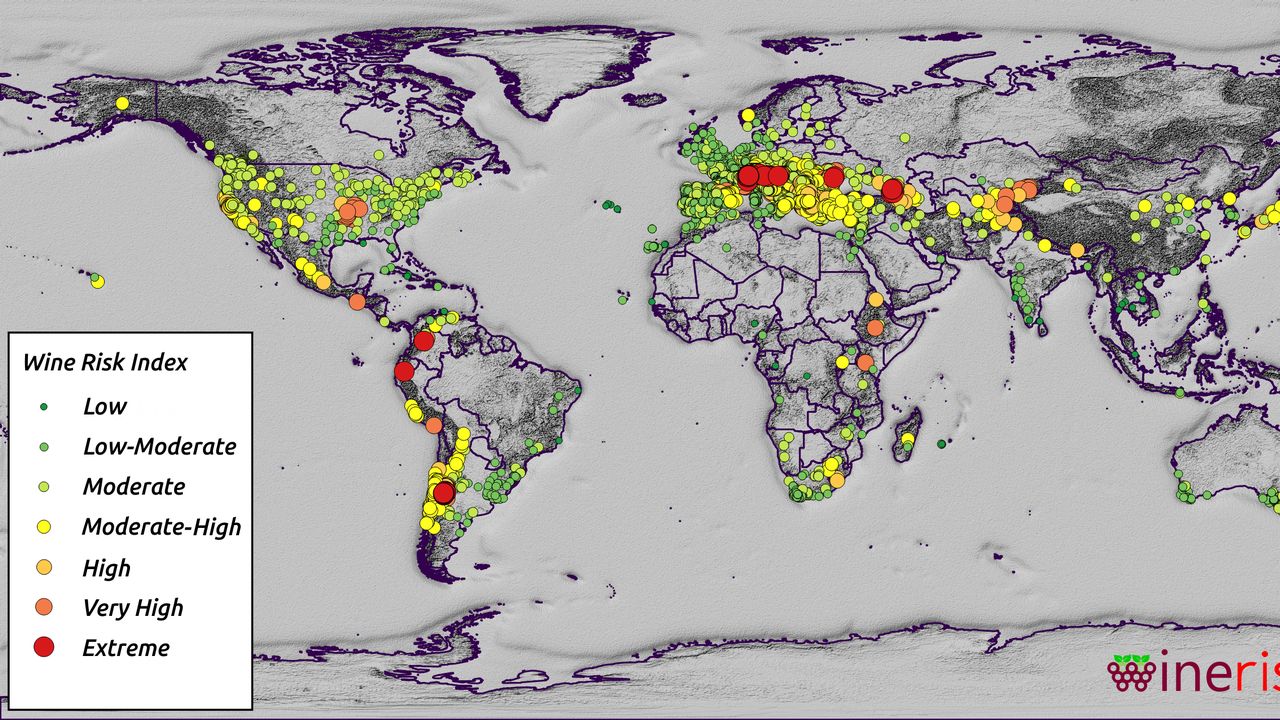 Every year, worldwide wine industry suffers losses of more than ten billion US dollars from damaged assets, production losses, and lost profits due to extreme weather events and natural disasters. A multidisciplinary European-Australian team of researchers led by Dr. James Daniell of Karlsruhe Institute of Technology (KIT) examines the extent to which regions are affected by the risks and how climate change influences wine industry. At the 2017 Annual Conference of the European Geosciences Union (EGU) in Vienna, Daniell presented a global risk index for wine regions.

The wine regions of Mendoza and San Juan in Argentina are exposed to the highest risks due to extreme weather and natural hazards worldwide. Kakheti and Racha in Georgia come in at number 2, followed by Southern Cahul in Moldova (number 3), Northwest Slovenia (number 4), and Yaruqui in Ecuador and Nagano in Japan (number 5). These are the first results of a current worldwide study and the first release of the global risk index for wine regions presented by the head of the study, Dr. James Daniell, of the Geophysical Institute (GPI) and the Center for Disaster Management and Risk Reduction Technology (CEDIM) of KIT at the 2017 Annual Conference of the European Geosciences Union (EGU) in Vienna in the session of “Natural hazard event analyses for risk reduction and adaptation.” The EGU honored Daniell by granting him the “Early Career Scientist Award in Natural Hazards for 2017.” The study is carried out and the index is developed in cooperation with seismologists, meteorologists, and representatives of other disciplines from KIT, Australian National University, University of Adelaide, Griffith University, University of New South Wales, and University College London as well as Risklayer GmbH, a company located in Karlsruhe. The “WineRisk” website summarizes the results of the study and presents solutions for wine regions: www.winerisk.com

The study covers more than 7,500 wine regions in 131 countries. There is no wine region in the world that is not exposed to extreme weather or natural disasters. Events, such as frost, hail, floods, heat, drought, forest fires, and bushfires as well as earthquakes make worldwide wine industry lose more than 10 billion US$ every year according to conservative estimations. These losses result from damaged assets, losses of production, and lost profit.

“Cold waves and frost have a large impact,” James Daniell says. In the last few days, much frost occurred across Europe, with Slovakia, Bosnia, Serbia, Hungary, Austria, and Czech Republic having the worst impact. Hailstorms are one of the largest yearly natural threats to European winemakers. Traditional wine countries like France and Italy have seen huge losses in the past five years due to hail and frost, with many losses being recorded in the regions of Burgundy and Piedmont. The hail losses from 2012 to 2016 in some vineyards totaled 50 to 90 percent of the value of the crop and caused long-term damage to many old vines. It is not just Europe that is affected by hail. All over the world, winegrowing regions are affected by at least one hail event per year, which can cause damage to the single vintage or to multiple vintages depending on the growth phase of the vines. According to James Daniell, hail nets can save the crop in most cases, given a large hail event. “Cost-benefit analyses generally show that the premium wines should be the ones covered by hail nets, with insurance or other cheaper methods used for other wines.” 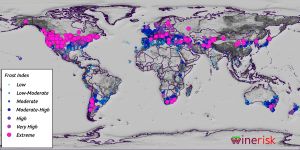 Earthquakes have the ability to knock out the infrastructure of entire wine regions for a number of years. In the past years, earthquakes struck Chile, New Zealand, and the USA, among other smaller events causing damage around the world. Over 125 million liters of wine were lost in Chile in 2010, mainly due to the failure of steel tanks. “Earthquake-resistant design could have saved many millions of liters,” Daniell says. Earthquakes also cause large losses to buildings, tanks, barrels, equipment, and chemicals. Even small earthquakes do not only cause financial loss, but also historical loss by destroying tasting rooms and rare wine collections. A few dollars investment in stabilization mechanisms, such as quake wax, zip ties or bolts, can often save millions of dollars loss. In addition, natural disasters are associated with losses of jobs and tourism. 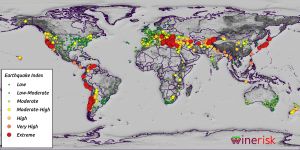 Global climate change will have both positive and negative effects on wine industry, according to the study. Researchers expect a general shift of wine-growing regions southward and northward, while some wine regions closer to the equator may be lost. Many wines may indeed improve. “The English, Canadian, and Northern China wine regions will likely increase production markedly and continue to improve their market share and quality of production,” predicts Dr. Daniell. The scientists expect that many wineries will master climate changes by changing grape varieties or harvest times. In addition, they will profit from new grape strains, innovative technologies to optimize production and reduce damage due to biological pathogens and insects, and new methods to overcome extreme weather events.

The study also covers problems, such as bushfires causing smoke taint to vines. However, smaller-scale studies are required before the results can be included globally in the index. In addition, the effects of floods on vines are being explored. Nevertheless, a major volcanic eruption would likely cause the largest global impact to the wine industry, examples being the Laki eruption of 1783/84 or the Tambora eruption in 1815 which caused the famous “year without a summer” in 1816. Atmospheric changes, lack of sunlight, and global transport problems could cause major issues not only for the wine industry, other food security issues would likely be more important.

Despite all these hazards, the wine industry continues to grow and diversify. “Through detailed natural hazard analysis, research can help winemakers and governments alike to prepare adequately for the natural hazards that they face and to reduce losses,” Dr. James Daniell says. The geophysicist born in Australia also developed the CATDAT database covering socioeconomic data on natural disasters. Last year, he published CATDAT statistics, according to which 8 million people died and over 7 trillion US$ of loss were caused by natural disasters since 1900.

The Biggest Wine Producers in the World and Their Main Threats: