Network for Neutrino Research and Sensors

Particle Physicists of KIT, Heidelberg University, and National and International Partners Intensify Cooperation to Learn More about the Building Blocks of the Universe 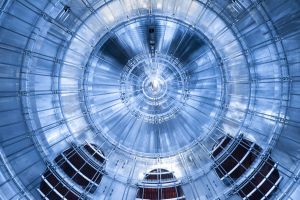 Sensors and detectors of enhanced precision for particle physics experiments, such as KATRIN, are the objective of the International Neutrino Mass Network. (Photo: KIT)

The most precise scale in the world will start operation in Karlsruhe at the end of this year. For a period of five years, it will acquire data to precisely determine the mass of the neutrino. But already now, particle physicists of KIT and Heidelberg University think about the technology that might be the basis of the next generation of particle scales. Both institutions have signed a memorandum of understanding on future joint research activities with national and international partners in the Neutrino Mass Network.

Neutrinos play an important role in studies of the origin of matter and in the development of visible structures in the universe. Their mass that is supposed to be more than a billion time smaller than that of a hydrogen atom is an important, but still inaccurately determined parameter. To measure it, researchers of KIT and Heidelberg University, in cooperation with national and international partners, develop extremely precise sensors and detectors for particle physics experiments, such as KATRIN and ECHo.

“We are now taking the right steps for Germany remaining a mecca of neutrino research for a long time,” rejoices Guido Drexlin of KIT, one of two spokespersons of KATRIN, the KArlsruhe TRItium Neutrino Experiment. “The technologies developed by KATRIN and ECHo will be of relevance to the entire field of particle physics.” 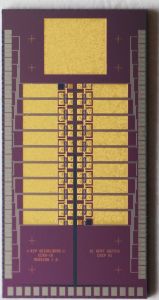 “Collaboration of the experiments conducted in Karlsruhe and Heidelberg increases our impact and international visibility,” says Christian Enss of Heidelberg University, who is spokesperson of the DFG research group ECHo – the Electron Capture Holmium Experiment. “Our work focuses on sensors that are of interest to both fundamental research and application, examples being materials analysis or mass spectroscopy of heavy biomolecules.”

The groups have now decided to pool and intensify existing contacts and signed a Memorandum of Understanding (MoU) on the principles of future collaboration. About 230 scientists from Germany, France, India, Russia, Switzerland, Slovakia, Spain, Czech Republic, and the USA are planned to contribute to the now established International Neutrino Mass Network. Their central goal is to develop new sensors and sample processing technologies and to test them in joint experiments. It is also planned to organize joint workshops and to jointly promote young scientists. The International Neutrino Mass Network (absolute neutrino mass scale from nuclear β-decay and electron capture) will be managed jointly by Katrin Valerius, Head of the Helmholtz-University Young Investigator Group of KATRIN, and Loredana Gastaldo, Spokesperson of ECHo.

The ECHo experiment in Heidelberg is designed to determine the neutrino mass from electron capture by holmium-163 in the next decade. For this purpose, the ECHo collaboration plans to produce ultra-pure holmium and is presently developing metallic magnetic calorimeters of high energy resolution and quick response time at very low temperatures. They can be optimized for various types of particles and energy ranges and are cooled down to a few millikelvin by means of helium dilution cryostats. ECHo pursues an approach that is complementary to that of KIT’s KATRIN experiment.

KATRIN combines a number of technologies and components. Along the 70 m long way of an electron through the experiment, superconducting magnets and cryotraps, gas-filled areas and vacuum, zones with temperatures below 4 kelvin and room temperature are located. Their operation has to be coordinated optimally for the electrons to hit the detector after a time of flight of a few millionths of a second. The detector made of silicon semiconductor material has a diameter of about 125 mm and contains 148 pixels that are arranged similar to a dartboard to allow for a spatial “view” into the world of KATRIN.

The international KATRIN experiment will determine the neutrino mass with an accuracy that will exceed the precision reached so far by more than an order of magnitude. From the beginning of next year, electrons produced by the β-decay of tritium, in which neutrinos play an important role, will be measured precisely in a spectrometer of 24 m in length. First interesting results for the neutrino mass are expected to be obtained by mid-2018. Then, measurement sensitivity of KATRIN will already be far better than that of all other tritium decay experiments of the last three decades together. The planned ultimate sensitivity will be reached by KATRIN after five calendar years of measurement time. The technologies for the time after that will now be developed by the International Neutrino Mass Network of KIT and Heidelberg University and their national and international partners. The national partners of the Network are the Max Planck Institutes for Nuclear Physics, Heidelberg, and for Physics, Munich, the Universities of Berlin (HU), Bonn, Dresden, Mainz, Münster, Tübingen, and Wuppertal, and the University of Applied Sciences of Fulda.