Back in the Depot: AERO-TRAM Measurements Completed

Climate Data from the Tram: Project for the Scientifically Precise Measurement of Air Quality in the Region of Karlsruhe Is Completed – Cooperation of KIT and VBK 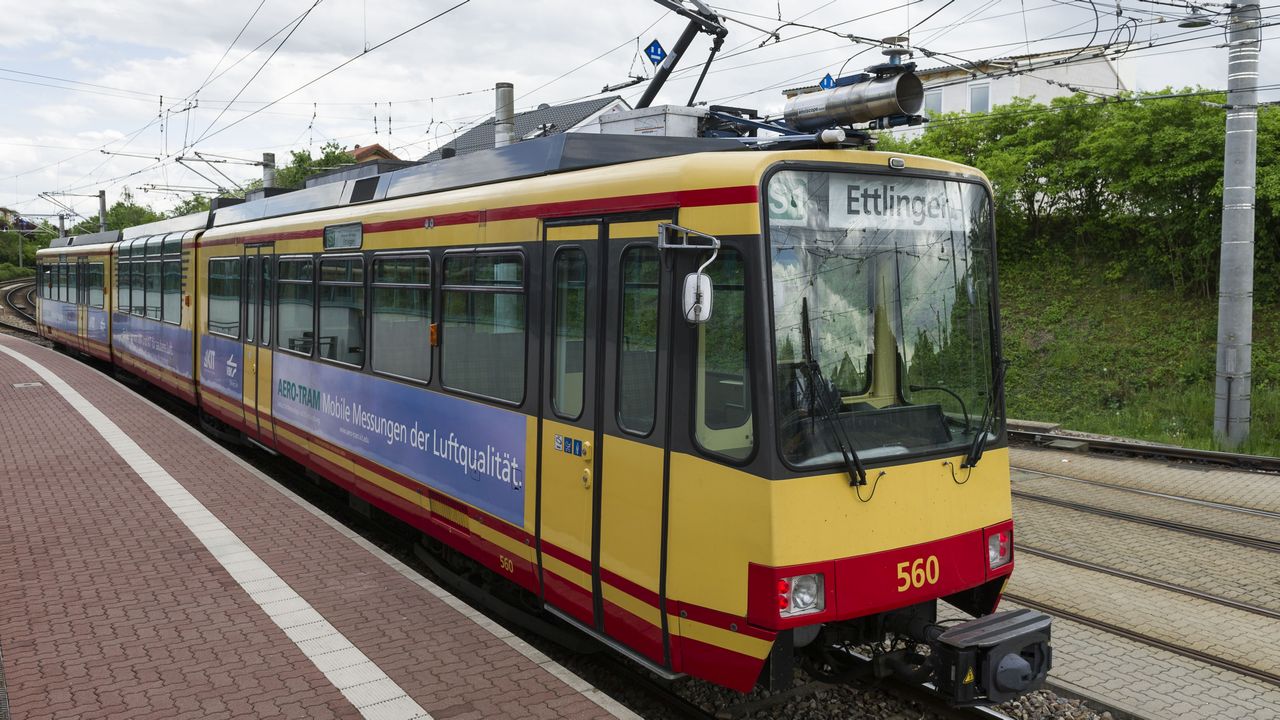 The tram with the instruments on top of the driver’s cabin and the AERO-TRAM logo made a total of 6228 measurement drives. (Photo: Patrick Langer, KIT)

Since 2009, AERO-TRAM has covered a distance of about 200,000 km, corresponding to a trip five times around the earth. During 6228 measurement drives in the local tram network, the tram equipped with numerous instruments collected data on pollutant concentration. A result: As soon as the tram leaves the city center of Karlsruhe and enters the surrounding municipalities, nitrogen oxide concentration decreases by about 70%. Recently, the project of climate researchers of Karlsruhe Institute of Technology (KIT) in cooperation with Karlsruher Verkehrsbetriebe GmbH (VBK, Karlsruhe Transport Authorities) was completed.

Fine dust, nitrogen dioxide, ozone: Air quality in conurbations constantly is the subject of intense discussions. However, adequate countermeasures can only be developed, if precise scientific data are available. Having completed their AERO-TRAM project, scientists of the Troposphere Research Division of KIT’s Institute for Meteorology and Climate Research (IMK-TRO) have a comprehensive dataset, on the basis of which air pollution in the Karlsruhe city center and the surroundings can be represented and interpreted as a function of weather conditions, seasons, and traffic volume. “Mainly in winter, we have weather conditions with hardly any exchange of air masses. This leads to extremely high concentrations of directly emitted air pollutants, such as carbon black and nitrogen oxides. Ozone, by contrast, reaches highest concentrations in summer, because it is the result of photochemical processes, for which sunlight is needed,” project head Dr. Bernhard Vogel explains. The team uses a computer model developed by KIT to transfer the data measured to other cities, where no comparable mobile measurements have been made. “We are highly grateful to the VBK. Coordination of research work and tram traffic was not always easy, but worked perfectly thanks to the high commitment of all parties,” Vogel adds..

“As a municipal company rendering transport services, we stand for sustainable mobility that reduces environmental pollution in conurbations and increases man’s quality of life. We were highly pleased to support this project and hope that the data obtained provide KIT researchers with major insight into air pollution in Karlsruhe. On this basis, appropriate countermeasures can be developed,” Alexander Wetzl, project manager for research and development of the Karlsruhe Transport Authorities says.

Climate data from the tram: AERO-TRAM in a video:

Further dissemination of the videos, also in parts, for pedagogic, editorial or private purposes is permitted when indicating the source (Karlsruhe Institute of Technology). Any use or reproduction for purposes other than those mentioned or further dissemination in the advertising or commercial sector shall not be allowed.

“For the first time in Germany, we continously measured highly resolved spatial distributions of particles and nitrogen oxides produced by e.g. road traffic or combustion processes with a tram system in a conurbation over a long term,” Bernhard Vogel says. These particles are smallest suspended particles (aerosols), such as carbon black or dust, which originate from a number of natural and anthropogenic sources and may influence cloud formation.

High nitrogen oxide and particle concentrations were measured in the city center of Karlsruhe, above all at main traffic junctions, such as Mühlburger Tor/Kaiserallee. AERO-TRAM measurements also revealed that both concentrations decrease rapidly when entering the pedestrian area (Kaiserstrasse, Marktplatz). Nevertheless, average concentration values here are above those in the urban surroundings. It was also found that particle number and nitrogen oxide concentrations are largely independent of the wind direction. At low wind speed, these concentrations are 50% higher on the average than in case of strong winds.

Measurement instruments on the roof of AERO-TRAM. (Photo: VBK)

Compared to the particle numbers, nitrogen oxide concentration decreases much more rapidly when leaving the city center and entering the surroundings. For nitrogen oxide, this decrease was found to be 70%, while particle concentration dropped by 50% only. “We also found a rural area, where particle numbers increased again and reached values comparable to the urban area. But here, nitrogen oxide values did not increase. Such hot spots cannot be detected with widely distributed measurement stations,” Vogel emphasizes. The scientists attributed these high particle numbers to industrial emissions at five to ten kilometers distance. Due to these results, a subsequent experiment was initiated in this region (http://www.imk-aaf.kit.edu/156.php) to analyze chemical particle composition in detail. This campaign is still being evaluated.

The largely automated long-term measurement of concentrations of the trace gases ozone (O3), nitrogen monoxide (NO), additional nitrogen oxides (NOx), carbon monoxide (CO), carbon dioxide (CO2), and water vapor (H2O) as well as of the total particle number and particle size distribution in the area of Karlsruhe was the objective of the project. Since 2009, a tram provided by the Karlsruhe Transport Authorities (VBK) was operated on lines S1/S11 and S2 going from the surroundings of Karlsruhe through the city center into the surroundings again. Air quality was measured in north-south direction through the Rhine valley, from Hochstetten to Bad Herrenalb and from Spöck northeast of Karlsruhe to Rheinstetten in the southwest.

In 2011, AERO-TRAM won the federal innovation competition “365 Places in the Land of Ideas.”

More information: http://www.aero-tram.kit.edu (in German only)