Costs of Public Illumination Will Be Reduced by New, More Efficient LEDs and Special Method of Interconnecting Them – Production Started by Industry Partner 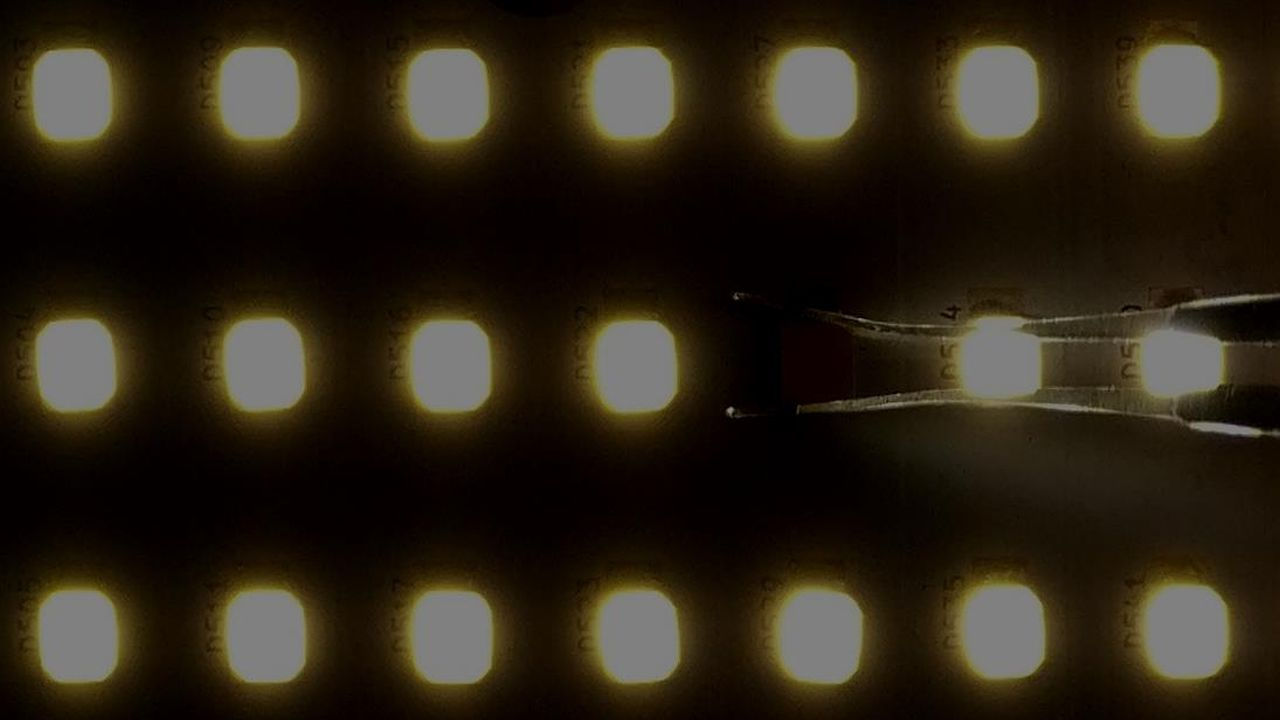 Array of low-power light-emitting diodes. Failure of a single LED does not affect the overall system. (Photo: KIT)

Researchers of Karlsruhe Institute of Technology (KIT) have developed a novel type of LED street light of increased efficiency. Compared to conventional LEDs, power consumption may be reduced by up to 20%. This will also decrease costs and CO2 emission. Conventional high-power diodes are replaced by a special array of LEDs. This enhances efficiency, increases service life and safety, and produces a better light.

Parallel connection of a large number of LEDs is difficult, as failure of a single diode will cause failure of the overall system or section. According to Michael Heidinger of KIT’s Light Technology Institute, the alternative of connecting LEDs in series is also associated with drawbacks, because the voltage required increases with the number of diodes used. As the legally permissible contact voltage is limited to 120 volts, only up to 40 LEDs have been connected in series so far.

Heidinger has now invented an interconnection method that compensates aging and failures of individual LEDs. This method allows to install a large number of LEDs – 144 in the prototype – on a single board and to operate the array safely. This new switching concept works with far smaller voltages. “Voltage of the prototype was 20 volts,” Heidinger says.

Moreover, the array produces less heat. “In case of a few LEDs, power loss is highly concentrated,” Heidinger says, “and has to be distributed with a high effort.” Insufficient heat distribution causes local overheating that massively affects the service life of the lamp. Heat distribution or reduction requires a high expenditure and, hence, is expensive. Such costs are reduced when using Heidin-ger’s new LED array.

In addition, luminous characteristics are more comfortable for the human eye. “Many small LEDs are perceived as panel radiators from a certain distance. Their glaring effect is smaller than that of high-performance LEDs that are perceived as spot-like light sources.” Moreover, low-power LEDs are cheaper than high-performance LEDs. Hence, the new system can be produced and offered at the same prize, although more light-emitting diodes are required. Last but not least, change to the new lamp technology is uncomplicated and inexpensive. ”The LED module can be installed simply into existing lighting systems,” Heidinger says.

Industry partners are already developing first products based on KIT’s technology. “For the first time, we can now construct glare-free lamps of high efficiency, which meet highest safety standards,” Klaus Müller, Managing Director of Gratz Luminance, says. “Before the end of this year, we will make available our lamp to customers for testing purposes.”

Work was performed within the framework of the collaborative project “Optimiertes Gessamtsystem LED-Leuchte” (Optimized LED-based Illumination System). The project was funded by the Federal Ministry for Economic Affairs and Energy under the “Zentrales Innovationsprogramm Mittelstand” (Central Innovation Program for Medium-sized Companies), grant number ZF4046701LT5.