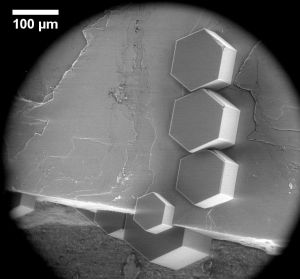 Ice crystals on a feldspar crystallite under the electron microscope. Although they grow on various levels of the feldspar, they have the same orientation. (Photo: Alexei Kiselev and Dagmar Gerthsen, KIT)

In the atmosphere, feldspar particles act as ice nuclei that make ice crystals grow in clouds and enable precipitation. The reason was found by researchers of Karlsruhe Institute of Technology (KIT) and University College London (UCL) with the help of electron microscopy observations and molecular dynamics computer modeling. The ice nucleus proper is a quasi-hidden crystal surface of the feldspar that is exposed at surface defects only. The researchers present their findings that are of major relevance to the understanding of cloud and precipitation formation in Science. (DOI:10.1126/science.aai8034)

About 90 percent of precipitation over land depends on the formation of ice crystals in clouds, which fall down due to their increasing weight. But water in clouds only freezes when certain particles are present, on which ice crystals can grow. Of all aerosol particles, i.e. solid suspended particles in the atmosphere, however, only few act as ice nuclei. These rare aerosol particles decisively determine precipitation on earth. Hence, it is important to understand what makes them differ from other particles. “Such an understanding would improve our ability to predict ice and precipitation formation in a future changed climate with changed aerosol loading,” says Professor Thomas Leisner, Head of the Atmospheric Aerosol Research Division of KIT’s Institute of Meteorology and Climate Research (IMK-AAF).

Scientists of IMK-AAF, in cooperation with researchers of the KIT Laboratory of Electron Microscopy (LEM) and University College London (UCL) have now succeeded in solving this question for the most important class of inorganic atmospheric ice nuclei, i.e. mineral dust particles consisting of feldspar. As is reported in the Science magazine, the scientists combined electron microscopy observations with molecular modeling to determine for the first time the atomic nature of this important inorganic ice nucleus. They showed that ice starts to grow on feldspar crystallites not on the accessible crystalline faces, but at microscopic defects like edges, cracks, and small depressions. Even though these defects are distributed randomly at the crystallite surface, the ice crystals grow with the same orientation relative to the feldspar crystal lattice.

From these observations and from extensive molecular modeling, the scientists concluded that a specific crystal face that only occurs at defects on the surface of the feldspar crystallite is the underlying nucleus for ice formation. “Feldspar is one of the most active atmospheric ice nucleating agents, but why it is so good at making ice has remained unclear,” said Professor Angelos Michaelides of UCL. “By identifying the active site for ice nucleation on feldspar, we have found an important piece of the puzzle.” The researchers now expect similar studies to reveal the properties of other minerals acting as ice nuclei.