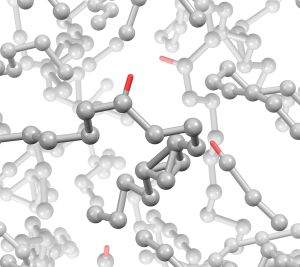 Researchers of Karlsruhe Institute of Technology (KIT) for the first time have now produced micro- and nanostructured magnetic carbon. Together with scientists of Freiburg University, they provided polymers with minute structures by means of lithography and converted them by pyrolysis. In this way, they obtained pyrolytic magnetic carbon (PMC). It is inexpensive, can be used at room temperature, and is suited for micro- and nano electromechanical systems (MEMS and NEMS). PMC is presented by the researchers in the Journal of Applied Physics. (DOI: 10.1063/1.4972476)

Normally, pure carbon is not magnetic. Use of carbon in nanotechnology, hence, has concentrated on its electron transport properties so far. Among the few existing examples of magnetic carbon production, none has found a direct route into scalable micro- and nanofabrication. For the first time now, researchers in the team of Professor J. G. Korvink of KIT’s Institute of Microstructure Technology (IMT), in cooperation with scientists headed by Professor Stefan Weber of the Institute of Physical Chemistry of the University of Freiburg, have succeeded in producing micro- and nanostructured magnetic carbon. The pyrolytic magnetic carbon (PMC) produced is inexpensive, remains stable at extremely high temperatures unlike most magnetic materials, and does not require any special storage conditions, can be used at room temperature, and is compatible with most scalable lithographic techniques.

The researchers report in the Journal of Applied Physics that they used polymer materials usually applied for the production of micro electrochemical systems (MEMS). MEMS are very small components that process electric and mechanical information, among others in measurement and safety technologies, or in medical and automotive engineering. The polymers used can be provided with micro- and nano patterns using various methods. The team of researchers from Karlsruhe and Freiburg applied photolithography and two-photon lithography. In the first case, the information stored in a mask is transferred to a radiation-sensitive layer by photographic reproduction. In the latter case, liquid resin is hardened by focused laser beams, as a result of which minute three-dimensional structures can be produced at high speed.

The scientists then subjected the patterned polymers to a pyrolysis process. The temperature was set to about 600°C only, which is compatible with a number of MEMS materials. In this way, the polymers were converted into carbon. “This pyrolytic magnetic carbon, PMC for short, is fundamentally different from glass-like carbon, the classical form of pyrolytic carbon. PMC possesses intrinsic magnetic properties, because it changes it microstructure during pyrolysis and forms unpaired electron spins,” explains Dr. Swati Sharma of KIT’s IMT, the corresponding author of the publication. “The more unpaired electron spins exist, the stronger are the magnetic properties.”

Thanks to its stability and the inexpensive production costs, the pyrolytic magnetic carbon (PMC) produced by the process above is attractive for a variety of applications, including the next generation of micro electromechanical systems (MEMS) and further miniaturized nano electromechanical systems (NEMS), magnetic resonance spectroscopy, and other imaging techniques as well as for the production of magnetic composites. Moreover, PMC is of interest for fundamental research into magnetic phenomena of carbon.

Production of PMC is the result of interdisciplinary cooperation: Apart from Dr. Swati Sharma, whose studies focus on carbon-based MEMS, the physicist Dr. Lorenzo Bordonali and the chemist Dr. Neil McKinnon from the group of Professor Jan G. Korvink, magnetic resonance technology expert at KIT and the materials scientist Arpad M. Rostas from the group of Professor Stefan Weber of the University of Freiburg were involved. The work was funded under the NMCEL EU project coordinated by Professor J. G. Korvink.