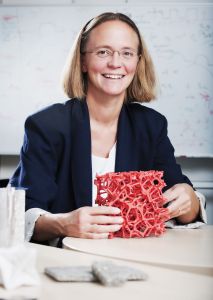 “The career of Britta Nestler is a success story,” says Professor Oliver Kraft, KIT Vice President for Research. “She is an excellent and highly committed scientist, who has largely influenced her discipline in Germany. I am very pleased that she now receives the most important research prize in Germany. This once again reflects our scientists’ strength in research. Congratulations to Britta Nestler.”

How does the microstructure of a material develop during production, i.e. during casting or rolling of sheet metal? Which influence does heat or mechanical loading have on the service life of e.g. power plant boilers or solar facilities? To answer these questions, Britta Nestler studies the microstructures of materials by means of computer-aided simulations. She combines expertise in materials science and software technology and develops realistic three-dimensional models of materials based on multiscaled and multiphysical approaches. Theoretical findings obtained from microstructure modeling on supercomputers are incorporated in close-to-practice research projects together with industry, among others to improve brake disks, corrosion prognoses, and medical diagnostics. Her studies, among others, focus on the structure of crystals, fabrication processes, porous media, crack propagation, or phase transition between the liquid and solid when alloys solidify. As a materials researcher, she cooperates with geologists to analyze e.g. the formation of grain structures in rock and helps better understand the processes of geological history and use of geothermal energy. In cooperation with energy researchers, she develops foam structures within integrated phase change materials for use in latent heat storage systems.

Britte Nestler – About the Person

Since 2010, Britta Nestler has been conducting research and teaching at Karlsruhe Institute of Technology (KIT), where she is member of the Board of Directors of the Institute for Applied Materials. In addition, she was appointed Director of the Computational Materials Science and Engineering Department of the Institute of Materials and Processes of Karlsruhe University of Applied Sciences (HsKA) in 2008. In the same year, she established the Steinbeis Transfer Center “Materials Simulation and Process Optimization” that is also headed by her. Since 2001, Nestler has been professor of HsKA. Before, she spent several research periods abroad and also worked in industry. Britta Nestler has four children.

In 2000, Britta Nestler was conferred her doctorate by RWTH Aachen University, where she previously received her diplomas in physics and mathematics. As a third subject, she studied pedagogics. Among the prizes she received so far is the State Award for Applied Research (2007) of the Baden-Württemberg Ministry of Science, Research, and the Arts. Together with the Department of Informatics of Karlsruhe University of Applied Sciences, she received the State Teaching Award (2009). In addition, Nestler was granted the Research Prize of Karlsruhe University of Applied Sciences in 2014, the Materials Science and Technology Prize of the Federal of European Materials Societies (FEMS) in 2004, and the Richard von Mises Prize of the Society for Applied Mathematics and Mechanics (GAMM) in 2002. Since 2010, Nestler has succeeded in acquiring funding for research and education in the amount of more than EUR 5.5 million.

Apart from Britta Nestler, seven scientists of KIT have been granted the Leibniz Prize by DFG so far.

Since 1986, the Leibniz Prize has been awarded annually by DFG. It was established to honor outstanding scientists for research in all areas of science. The prize money in the amount of about EUR 2.5 million can be spent by the winners according to their own ideas and without bureaucratic expenditure for their scientific work within a period of up to seven years. This year, the Leibniz Prize goes to ten scientists. So far, 348 researchers have won the Prize that is considered one of the most important science awards worldwide. Seven Leibniz Prize winners were awarded the Nobel Prize afterwards. The Leibniz Prizes will be handed over on March 15, 2017 in Berlin.