Chairman of the Supervisory Board of Hewlett-Packard GmbH to Give Two Public Lectures at KIT on October 19 and November 3, 2016 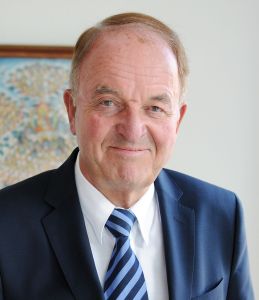 J. Menno Harms will speak about challenges on the way towards the digital era. (Photo: Private)

Karlsruhe Institute of Technology (KIT) and the Karlsruhe University Society (KUG) confer the 2016 Heinrich Hertz Guest Professorship on J. Menno Harms. In two public presentations, the Chairman of the Supervisory Board of Hewlett-Packard GmbH will speak about “Consequences of Digital Networking” and “Governance on the Way towards the Digital Era.” These presentations will take place on October 19 and November 3, 2016, 17.30 hrs, in the Tulla-Hörsaal on Campus South of KIT (building 11.40, Englerstraße 11, Karlsruhe). In a seminar for KIT students, Harms will report about his work at a global IT company. The presentations and the seminar will be in German.

The second presentation “Führung auf dem Weg ins digitale Zeitalter – Anspruch und Wirklichkeit” (November 3) (Governance on the Way towards the Digital Era – Goals and Reality) will focus on changes caused by digitization in companies and organizations of civil society. J. Menno Harms will highlight governance and management cultures required by the digital world and will compare them with reality.

In the seminar “Arbeit in einem globalen IT Unternehmen - Erfahrungen” (Work at a Global IT Company – Experience) for students of KIT, J. Menno Harms will speak about the start of his career and his further development. He will give concrete recommendations for students and graduates.

With the Heinrich Hertz Guest Professorship, the Karlsruhe University Society (KUG) and KIT honor outstanding personalities of science, industry, politics, and culture for their achievements in and contributions to research and society. The KUG, an association supporting KIT’s academic education activities, endowed the guest professorship in 1987, one hundred years after the detection of electromagnetic waves by physicist Heinrich Hertz at Karlsruhe Technical University, a predecessor institution of KIT.

Jörg Menno Harms was born in 1939 in Plön (Holstein) and studied electrical engineering/communication technology at TH Stuttgart. In 1967, he completed his studies by an engineering diploma. Since 2001, he has been working as a Honorarprofessor at the Institute of Business Administration of Stuttgart University.

In 1968, Harms started to work as a development engineer at Hewlett-Packard GmbH in Böblingen, the German subsidiary of the American information technology company HP. Until 1980, Harms held various positions in the areas of development, manufacture, marketing, and sales. From 1981 to 1985, he was Division General Manager of Böblingen Medical Division, from 1986 to 1992, he worked as General Manager of the Medical Products Group Europe. In 1993, Harms was appointed Chairman of the Management Board of Hewlett-Packard GmbH. He chaired the board until 2000 and from 2002 to 2004. Since 2005, he has been Managing Director of Menno Harms GmbH International Management Services, Stuttgart.

J. Menno Harms presently chairs the Supervisory Board of Hewlett-Packard GmbH Böblingen and, among others, he also is Chairman of the Supervisory Boards of Alcatel Lucent Deutschland AG as well as of Alcatel Lucent Holding GmbH, Chairman of the Initiative Zukunftsfähige Führung (IZF) e.V. (Initiative of Future-oriented Governance), and Member of the Central Committee of the Bitkom digital association. In the past, he exercised a number of mandates in companies, associations, and institutions. In 2000, J. Menno Harms was awarded the Federal Cross of Merit. In 2004, he received the Medal of Merit of the State of Baden-Württemberg.