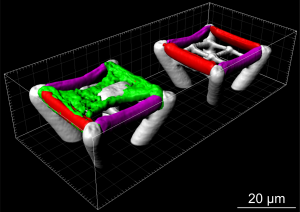 Three-dimensional printing is increasingly applied worldwide, like in toy and automotive industries. In micro- and nanoranges, use of the process for the artificial production of biological tissue (tissue engineering) might result in new findings, as it is the case for specifically designed 3D petri dishes. Three scientists of Karlsruhe Institute of Technology (KIT) developed a method to produce flexible, three-dimensional microscaffolds for cultivating cells under suitable conditions and to conduct corresponding research. For this, they are now granted the Erwin Schrödinger Prize by the Helmholtz Association of German Research Centers.

“The strength of KIT’s research is not only reflected by the competencies and achievements of individual scientists, but also by their motivation to jointly and interdisciplinarily manage challenging research problems,” says the President of KIT, Professor Holger Hanselka. “The Erwin Schrödinger Prize for the professors Bastmeyer, Wegener, and Barner-Kowollik honors successful interdisciplinary cooperation for the joint development of highly innovative ideas and new research areas.”

“Every organism consists of cells, whose behavior and development depend on the mechanical and chemical properties of their three-dimensional environment among others,” Professor Martin Bastmeyer of KIT’s Zoological Institute and Institute of Functional Interfaces says. “To adequately study cells, it is therefore important to represent as realistically as possible the processes taking place in this environment.” According to Bastmeyer, however, the existing experimental models frequently only cover cell cultivation in two-dimensional petri dishes, whereas the cell environment is not modeled adequately. In the setup and development of cells and their interaction with each other as well as their environment, these models often differ considerably from three-dimensional ones. “The lack of adequate models significantly limits current tissue engineering potentials,” Bastmeyer emphasizes. 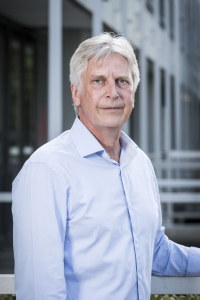 In order to produce three-dimensional microscaffolds for cell cultivation, the biologist contacted his colleague Martin Wegener, who works as a professor at the Institute of Applied Physics and heads a research unit at the Institute of Nanotechnology. Wegener has specialized in laser-based lithography: “By means of this technique, we write the scaffolds into a special photoresist with a laser. This resist only hardens at those points that were exposed to the laser focus,” the physicist explains. Upon the completion of writing, the researchers develop the structures by washing out the underexposed areas. The hardened parts remain and form the scaffold. “The structures produced in this way are smaller than a hair’s thickness, i.e. about 50 micrometers,” Wegener says. 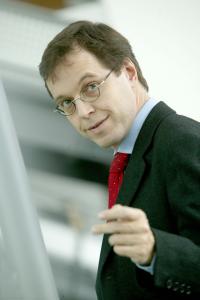 For these microscaffolds to be used as petri dishes for cell cultivation, they have to be provided with a biochemically active surface. In close cooperation with the groups of Wegener and Bastmeyer, Professor Christopher Barner-Kowollik of the Institute for Chemical Technology and Polymer Chemistry developed photoresists for producing functional scaffold structures. “These resists are bio-orthogonal, which means that they enable cell adhesion without affecting the biological processes of the cell,” Barner-Kowollik explains. Through specific photochemical processes, biomarkers are applied to certain points on the scaffold surfaces, to which the cells react. In this way, various signal molecules can be fixed flexibly to the scaffold in order to study the behavior of the cells cultivated there with high precision and spatial resolution. Barner-Kowollik uses the photoresists to produce scaffold structures with reactive surfaces to which complex biological markers can be attached subsequently. Bastmeyer then cultivates the cells directly on the scaffolds produced by Wegener.

The team successfully used these three-dimensional scaffolds for the cultivation and investigation of myocardial, connective tissue, and stem cells. Cell behavior in this artificial environment is very close to that in the natural environment, but differs considerably from that on two-dimensional surfaces. The easy production of flexibly and specifically designed petri dishes opens up a wide range of opportunities for culturing biological tissue that might be used in medicine to replace or regenerate diseased tissue of patients.

The Stifterverband for Promoting Science and Education and the Helmholtz Association grant the Erwin Schrödinger Prize to the three researchers for their interdisciplinary cooperation in the area of “3D Laser Printing of Functionalized Microstructures.” Since 1999, this prize has been awarded for work at the interface of various disciplines in medicine, natural sciences, and engineering and outstanding scientific or technical achievements. The prize is worth EUR 50,000. Click this link for a video on this research project  www.youtube.com/watch?v=rPtHUbRkdco (in German only).

In addition, the Helmholtz Association’s PhD Award in the research field “Matter” goes to a scientist of KIT: Wolfgang Gregor Hollik is granted the prize and thus EUR 5,000 for his PhD thesis “Neutrinos Meet Supersymmetry: Quantum Aspects of Neutrino Physics in Supersymmetric Theories” written at the Institute of Theoretical Particle Physics. The Helmholtz Association annually grants PhD Awards to young scientists in the research fields of Energy, Earth and Environment, Health, Key Technologies, Matter, and Aeronautics, Space and Transport.