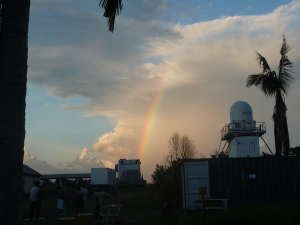 Shower and storm clouds over the city of Savé, Benin, in the evening: The diurnal cycle of air pollution and cloud formation is one of the subjects of the studies in DACCIWA. (Photo: Norbert Kalthoff, KIT)

West Africa is changing rapidly. An explosively growing population, massive urbanization, and unregulated deforestation modify the composition of the atmosphere, thus affecting weather and climate. How exactly these emissions are changing the region in the long term is not clear. The EU-funded project DACCIWA coordinated by Karlsruhe Institute of Technology (KIT) therefore studied the air over the coastal region of West Africa with the help of research aircraft and ground stations.

“The air over the coastal region of West Africa is a unique mixture of various trace gases, liquids, and particles,” explains Professor Peter Knippertz of KIT’s Institute of Meteorology and Climate Research, who coordinates DACCIWA. The sources of these particles and gases are monsoon winds with sea salt from the south, Sahara winds with dust from the north, charcoal fires and burning rubbish in cities as well as power plants, ship traffic, oil rigs, and outdated engines. “At the same time, multi-layered cloud covers frequently form in the atmosphere and strongly influence local weather and climate.” The composition of the particles in the air and what impacts they have on the formation and breakup of clouds has not yet been studied in detail. This information is not included in the weather and climate models presently used.

The EU-funded project DACCIWA (Dynamics-aerosol-chemistry-cloud Interactions in West Africa) investigates the relationship between weather, climate, and air pollution in West Africa. For the first time, a coordinated measurement campaign was launched recently to study the entire chain of impacts of natural and anthropogenic emissions on the West African atmosphere. In June and July, three research aircraft, the Falcon of the German Aerospace Center (DLR), the Twin Otter propeller plane “Ice Cold Katy” of the British Antarctic Survey, and the ATR of the Service des Avions Français Instrumentés pour la Recherche en Environnement (SAFIRE) of the French research institution CNRS, Météo France, and CNES, flew targeted missions over West Africa. The different aircraft were used in different ways based on their strengths, but all three had a comparable instrumentation generating a rich set of reference data.

Some impressions from the field work of the researchers and pilots are shown in a short video on the measurement campaign:

Dissemination of the video, also in parts, for pedagogic, editorial or private purposes is permitted, provided that the source is indicated (Karlsruhe Institute of Technology). Any use of reproduction for purposes other than those mentioned or dissemination in the advertising or commercial sector is not permitted.

Air pollution does not stay where it is produced, but extends inland by up to 300 km. For this reason, the aircraft followed the plumes of the big coastal cities of Accra, Abidjan, Lomé, and Cotonou on their way from the coast towards the inland forests, savannahs, and the Sahara. For the campaign, the scientists also set up three highly instrumented measuring sites inland. They measured urban emissions and evaluated health data. KIT climate researchers under the direction of Dr. Norbert Kalthoff were mainly active in Savé, Benin, where they used the “KITcube” measurement platform. The observation system integrates instruments for all relevant meteorological parameters and can measure a “cube” with an edge length of about ten kilometers as a part of the atmosphere. In parallel, a large weather balloon campaign was coordinated by Professor Andreas H. Fink, KIT expert for the African climate, in four West African countries. Optimal planning of the measurement flights and balloon launches was based on special forecasts with the COSMO-ART model developed by KIT. The project that has a duration of five years lays the foundation for new and more precise climate, weather, and air quality models for a more sustainable development of the region.

“Surprisingly, first results show that the plumes contain large fractions of organic materials,” Knippertz says. This finding points towards burning of charcoal, rubbish, and agricultural waste at low temperature. The particles from these fires lead to a considerable haziness in the atmosphere. Less sunshine reaches the ground, thereby changing the daily patterns of temperature, wind, and clouds. “For the first time, the measurements show an enormous complexity in the different cloud layers, the causes of which are still unclear.” Moreover, the air particles modify the formation of clouds and raindrops in the clouds.

Until 2018, the researchers will continue to study the impacts of atmospheric composition on cloud formation and air quality in West Africa, to evaluate the data measured, and to develop a new generation of climate and weather models. Work is also aimed at making more precise prognoses for West Africa, as strong impacts of climate change, such as water scarcity, heat waves or floods, are to be expected. Better prognoses will also be of benefit to other regions. “We know, for instance, that West African monsoon interacts with the Indian monsoon and it is an important factor influencing Atlantic hurricanes,” Knippertz says.

More about the DACCIWA Project