From Ecological Architecture to the Analysis of Reservoir Lake Emissions 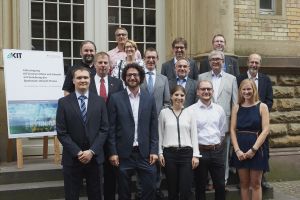 Five young KIT scientists received the 2015 Sparkasse Environmental Award. (Foto: Andreas Drollinger, KIT. Caption with all names at the end of the text.)

During the annual conference of the KIT Climate and Environment Center, the Karlsruhe Institute of Technology (KIT) and the Environmental Foundation of Sparkasse will present the Sparkasse Environmental Award to five junior researchers from KIT: Natascha Savic, Matthias Leschok, Laure Cuny, Dr. Georg Lieser, and Dr. Stephan Hilgert. The keynote lecture, entitled “Matches! – Bildanalyse in komplexen Umgebungen,” will be held by Prof. Stefan Hinz. Media representatives and all interested persons are welcome to attend the conference on Monday, July 25, 2016 at 5 p.m. in the Tulla Lecture Hall on KIT Campus South.

The Sparkasse Environmental Award worth a total of EUR 15,000, recognizes outstanding doctoral, diploma, and master theses as well as academic project work on environmental topics. For 2015, two doctoral theses, two diploma theses, and one master thesis will receive an award. The award winners will give short presentations of their studies during the annual conference of the KIT Climate and Environment Center.

In his diploma thesis on mycelium as a responsive architecture, Matthias Leschok studied new ways of ecological construction that link digital and organic manufacturing types. A mycelium is the mesh-forming subterranean part of a fungus, comparable to the roots of a tree. Matthias Leschok detected that mycelium, in combination with a wood-based substrate, can be used as an organic construction material. He conducted multiple experiments to transfer these organic structural elements to an architectonic level. His findings show that a substrate block interwoven by mycelium has a higher resistance to pressure than conventional styrofoam, is not inflammable, and has almost identical insulating properties. The elements are recyclable and can be produced in an energy-efficient way. Finally, Matthias Leschok developed the model of a future building that combines a man-made structure with natural cover.

A current research focus in nanotechnology are superparamagnetic iron oxide nanoparticles (SPION) for biomedical applications in the human body, but also for the restoration of contaminated aquifers. The diploma thesis of Laure Cuny presents research on the transport of nanoparticles in water-saturated porous media – influence of refractory organic matter and visualization using magnetic resonance tomography (MRT). The mobility of nanoparticles is an important factor for both applications, especially as regards product optimization and risk assessment. As the results of the study show, both the surface properties of the SPION and the presence of natural organic matter (NOM) have a crucial influence on the transport behavior. Laure Cuny’s approach can be transferred to other porous systems and contributes to a better understanding of particle transport in porous media for ecological and engineering purposes.

New materials for electrochemical energy storage systems are treated in the doctoral thesis of Dr. Georg Lieser. He investigated the synthesis and characterization of lithium metal fluorides as material for the positive electrodes of lithium ion batteries. For this purpose, he developed a novel sol-gel process that allows to produce lithium metal fluorides presenting a high phase purity without the need to employ toxic fluorination reagents. He characterized the compounds with respect to their phase purity and morphology, further processed them into nanocomposites, and was the first one to succeed with electrochemically characterizing them as electrode material. Reversible cycling of lithium was possible with all nanocomposites. Besides low electrode polarization, which is a measure of efficient lithium insertion of a cathode material, a high performance of this process could be demonstrated even with discharge rates as they occur in real-life applications, with different structure types yielding similar results. The relationship between electrochemical and structural properties derived from this study is a milestone for the future electrochemical characterization of lithium metal fluorides.

The construction of dams disrupts river systems and seriously alters biochemical circuits: Impoundments act as an accumulator of all substances carried along by the river; impounded water bodies turn parts of the organic carbon input into green house gas, especially into methane. During the last decades, the worldwide surface area of these man-made bodies of water has increased considerably. It is all the more important to quantify the emissions of climate-relevant gases. Dr. Stephan Hilgert conducted an analysis of the space-time heterogeneity of methane emissions from reservoir lakes by using the correlation of hydro-acoustic parameters with sediment parameters. The paramount objective of this doctoral thesis was to identify “hot spots” of methane production in Brazilian reservoir lakes. To capture the space-time heterogeneity, Stephan Hilgert combined three different measuring methods. His hydro-acoustic measurements using a 38/200 kHz single beam echo sounder yielded morphometric reservoir data. Moreover, he established a classification of the sea ground. The results allowed him to assign high or low methane production potentials to different parts of the reservoir.

Current developments and research projects conducted at the KIT Climate and Environment Center will be the subject of the lecture given by the Scientific Spokesman, Prof. Frank Schilling. In his keynote lecture, Prof. Stefan Hinz, Director of the Institute of Photogrammetry and Remote Sensing at KIT, will address the question whether matches found in the image analysis of complex environments are only a question of correct assignment. Furthermore, the graduates from GRACE Graduate School will receive their certificates at the conference. A poster exhibition will present the work of doctoral theses completed at the GRACE Graduate School. GRACE is a cooperation project of the KIT Climate and Environment Center, the Technical University of Darmstadt, and the ESADE Business School Barcelona. It is the goal of GRACE to provide to post-graduates not only highly specialized and interdisciplinary knowledge, but also important key skill qualifications as well as a platform for international networking aimed at preparing them for a scientific or business career in the fields of climate and environment.

Program of the KIT Climate and Environment Center
Annual Conference 2016

Michael Huber
Chairman of the Board of Sparkasse Karlsruhe Ettlingen

Presentation of the GRACE Certificates to the Graduate School Graduates