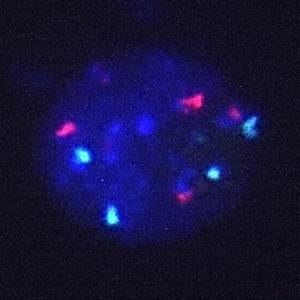 Scientists at KIT (Karlsruhe Institute of Technology) detected an important mechanism in the evolution of plant genomes: Using Arabidopsis thaliana as a model organism, they studied the formation of tandem repeat DNA sequences and found out that these sequences form if both DNA strands are broken at a significant distance from each other. For their experiments, the scientists used CRISPR/Cas system, working like a “pair of molecular scissors.” The results are presented in the PNAS journal. (DOI: 10.1073/pnas.1603823113)

Genome evolution is based on mutations, i.e. modifications of the genetic material that are passed on to the next generations. This includes the duplication of existing sequences in the DNA (deoxyribonucleic acid), which carries the genetic information. Thus, larger genomes with more genetic information can form during the evolution. Such duplications may be caused by various mechanisms.Plant genomes often contain shorter DNA sequences that are duplicated in a tandem fashion. Scientists at the Botanical Institute II of KIT now found out how these sequences come about. “As we know, the DNA is a double-stranded helix. Our results show that the repair of single-strand breaks occurring at a significant distance from each other in the two opposite strands plays an important role in the generation of duplicates in plant genomes,” Professor Holger Puchta, Head of Institute, explains.

The scientists learned from their studies of a model organism, Arabidopsis thaliana, that the synchronized repair of two such single-strand breaks consistently led not only to deletions, but also to tandem duplications of shorter sequences near the break locations. In a targeted manner, the scientists introduced differently spaced single-strand breaks into different regions of the genome and then analyzed the repair results by DNA sequencing.

In order to create the single-strand breaks exactly at the desired locations, the Karlsruhe scientists used novel “molecular scissors” – a special form of the CRISPR/Cas system. “Formerly, we could only work with molecular scissors that cut both strands at the same time, thus creating a double-strand break in the DNA. With the modified CRISPR/Cas system, it is now possible for the first time to use scissors that only cut a single strand. This enables us to investigate in detail how such damages to the DNA are repaired,” Puchta explains.

CRISPR/Cas designates a certain DNA segment (CRISPR – Clustered Regularly Interspaced Short Palindromic Repeats) and an enzyme (Cas) that recognizes this segment and cuts the DNA exactly at that location. With this method, genes can be removed, inserted, or replaced easily, quickly and accurately.

Holger Puchta was the first scientist ever to use molecular scissors for plants. With those studies, he showed not only that the scissors can be used as tools for targeted genome modifications, but he also found out that double-strand breaks may lead to major modifications in plant genomes. In their new research, presented in the Proceedings of the National Academy of Sciences of the United States of America (PNAS) journal, the researchers from the Botanical Institute II of KIT now also show that the presence of multiple single-strand breaks in the DNA can introduce genome modifications. Such single-strand breaks quite often occur naturally in plants, above all if they are exposed to UV light. “The newly discovered mechanism is therefore of enormous importance for understanding the evolution of plant genomes,” Holger Puchta says.