At Karlsruhe Institute of Technology, a Commemorative Plaque in Memory of the Members of the Former Technische Hochschule Karlsruhe who Suffered Persecution from the Nazis Was Unveiled Today. 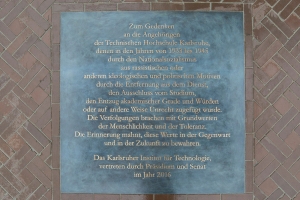 Starting in the spring of 1933, the national socialists issued a number of ordinances in Germany that formed the basis for persecuting political opponents and Jewish citizens and banning them from public offices. Also members of the former Technische Hochschule Karlsruhe became victims of those sanctions. In remembrance of the persons who were removed from office, excluded from studying, or whose academic degrees and honors were revoked, Karlsruhe Institute of Technology (KIT), represented by its Presidential Committee and the Senate, today unveiled a commemorative plaque in the KIT Ehrenhof.

“The Nazi persecutions took place in all areas of social life of that time – and this did not spare German science,” Professor Holger Hanselka, President of KIT said. “Today, science is founded on open-mindedness, tolerance, and pluralism – all of these are values national socialism broke with. It is also the responsibility of science to defend these values, today and in the future. In this context, it is essential to keep the discussion about the past alive. KIT takes this responsibility very seriously.” The persecutions were targeted at members of the Technische Hochschule Karlsruhe of that time as well, with the victims not only being renowned personalities from science, but also assistants, staff members, and student associates. “We are here to commemorate them all,” Hanselka said. 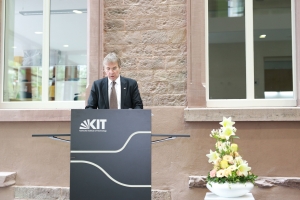 Immediately after the Nazis took over, the entire German state was rapidly transformed into a dictatorship. The regime quickly created the legislative basis for the persecution of Jewish citizens and for harassing political opponents. By and by, these provisions were continually tightened.

In the course of these persecutions, 11 out of the 41 full and extraordinary professors of the Technische Hochschule Karlsruhe of that time were removed from office. At least 13 persons from the ranks of honorary professors, assistants, staff members, and student associates were ousted. Due to the incomplete sources, it is no longer possible to determine the exact number for this group of individuals.

Students of the Technische Hochschule Karlsruhe were also affected by the persecution measures. After facing multiple obstacles imposed after 1933, Jews were no longer allowed to study for a doctorate degree 1937 onwards. In the wake of the November Pogroms in 1938, Jewish students were entirely barred from all universities. Based on the Reichsbürgergesetz (Law of Reich citizens), all Jews who were leaving Germany because they could or would no longer live in the Nazi state were deprived of the doctorate degrees they had obtained.

With the plaque unveiled today, KIT commemorates all members of the Technische Hochschule Karlsruhe who were victims of persecution. In his introductory speech on “Persecutions at the Technische Hochschule Karlsruhe during the Nazi Era”, Dr. Klaus Nippert, Head of KIT Archives, gave an overview of the historical background. In the lecture “On Room for Maneuver, Science, and the National-socialist Break with Civilization” that followed, Professor Rolf-Ulrich Kunze from the KIT Institute of Philosophy discussed the role of science in the Nazi period and the consequences to be drawn from history for the present and the future of KIT.

The text of the commemorative plaque is in German, its English translation reads as follows:

“This plaque commemorates the members of the Technische Hochschule Karlsruhe who suffered injustice by national socialism for racist or other ideological or political reasons by removal from the office, exclusion from studies, revocation of academic degrees and honors, or in any other way in the years from 1933 to 1945. The persecutions broke with the fundamental values of humanity and tolerance. Their memory admonishes us to keep these values alive in the present and in the future.

Karlsruhe Institute of Technology, represented by its Presidential Committee and the Senate, in the year 2016”

As the Senate of KIT emphasized in a resolution passed last year, it is an integral part of KIT culture to take an unbiased look at its own history, review it scientifically, and thus actively reflect it. For this reason, the KIT Senate commissioned an independent expert report that sheds light on how the predecessor institutions of KIT dealt with national socialism during and after World War II, and that examined the biographies of persons in leading positions who might have had a Nazi background.

Background: Persecution at Higher Education Institutions in Baden during the Nazi Era

In the course of ‘Gleichschaltung’ in 1933, the hitherto autonomous governments of the German Länder were deprived of their powers which were taken over by the Reich. However, persecutions of Jewish citizens and political opponents had started even before this process was complete. They were first performed by the Land of Baden and the government of the German Reich alike. On April 05, 1933, Gauleiter and later Reich Governor Robert Wagner, in his capacity as the head of the government of the Land of Baden, which still existed at that time, decreed the suspension from office of all “members of the Jewish race (without consideration of the confession they belonged to)” who worked in public service. The racist ideology of national socialism persecuted persons even independently from their own religious affiliation to Judaism. On April 13, a decree followed that terminated the employment or service of any persons ‘not considered as Aryan’, especially at higher education institutions.

The “Law for the Restoration of the Professional Civil Service” that applied to the entire Reich was enacted on April 07, 1933. This law was used as a general instrument for the definite removal of all persons identified as Jews and of all political opponents of national socialism from public service. In order to also remove all persons who were unwanted by the regime although they did not show open political opposition, a law on the release from duty and transfer of university teachers on the occasion of the reorganization of the German higher education system followed suite in January 1935. University teachers could now be removed by ‘reorganizing their chairs’ – pretending that an organizational reform was required.

The initial provisions were further tightened and systematized. The Citizenship Law dating from 1935 defined the notion of ‘Jewish descent’ and lead to the revocation of the previous exceptional regulation for those who had fought on the front lines or had lost relatives in World War I. The “Law on Civil Servants” following in 1937, finally also excluded persons with a ‘non-Aryan’ spouse from civil service.