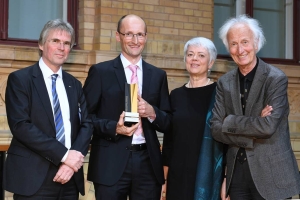 At the ceremony in Berlin: Award winner Wolfgang Wernsdorfer (second from the left) with the President of KIT, Holger Hanselka (left), State Secretary of the BMBF, Cornelia Quennet-Thielen, and the President of the Alexander von Humboldt Foundation, Helmut Schwarz (right). (Photo: David Ausserhofer)

Germany’s award in the highest amount for researchers from abroad was handed over to Professor Wolfgang Wernsdorfer yesterday evening (May 03) in Berlin. The pioneer of molecular spin electronics will now return from France to Germany: From June 01, 2016, Wernsdorfer will continue his research for the development of future quantum computers at Karlsruhe Institute of Technology (KIT). The research award in the amount of EUR 5 million was handed over by the State Secretary of the Federal Ministry of Education and Research, Cornelia Quennet-Thielen, and the President of the Alexander von Humboldt Foundation, Professor Helmut Schwarz.

“Wolfgang Wernsdorfer is the perfect match for KIT,” the President of KIT, Professor Holger Hanselka, says. “It is one of our objectives to make essential contributions in the areas of energy, mobility, and information for coping with the global challenges of mankind. We are very happy to have Mr. Wernsdorfer, an internationally renowned expert in the areas of electronics, spin physics, and quantum computting, in Karlsruhe in the future.” 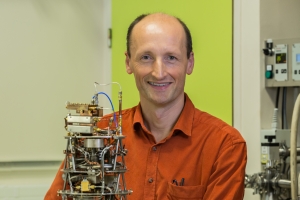 Wolfgang Wernsdorfer will come from the Institut NÉEL of the Centre National de la Recherche Scientifique (CNRS) in Grenoble, France, back to KIT in Germany. He is specialized in molecular quantum spintronics, an area of experimental solid-state physics at the interface to chemistry and materials sciences. Wernsdorfer is among the leading experts worldwide for molecular nanomagnets and their use in quantum computer systems. With his pioneer experiments, Wernsdorfer determined and further developed the area of quantum magnetism. He found how molecular magnets behave under the laws of quantum mechanics. Based on this finding, he was able to build electronic circuits with single molecules, in which electric current can be controlled by the magnetization of the molecule. 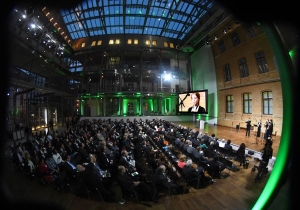 Wernsdorfer’s next goal is to integrate extremely small and quick molecular quantum processors into the highly advanced microelectronic chip technology. This would allow quantum computers to be developed, which are based on magnetic molecules and nuclear spins. If connected in an appropriate way and number, they would be far superior to conventional computers in terms of speed and energy efficiency. The ultimate objective is to use molecular nanomagnets coupled to semiconductor transistors in future quantum computers.

Presently, four spin states can be controlled by quantum mechanics in Wernsdorfer’s nanomagnets. With this, one building block of a quantum computer is given: The qubit. “It is my vision for the future to test how many cubits can be connected and how these quantum systems can be applied,” Wolfgang Wernsdorfer says. He will be member of the staff of KIT’s Physikalisches Institut and plans to cooperate in an interdisciplinary manner with the Institute of Nanotechnology and the Institute for Theoretical Solid-state Physics.

Wolfgang Wernsdorfer was born in 1966 in Germany and started to study physics at the University of Würzburg after he had passed vocational training to become an electrician and a higher vocational school. He completed his studies at the renowned École Normale Supérieure in Lyon/France. In 1993, he became a doctoral researcher at the Low-Temperature Laboratory and the Laboratoire de Magnetism in Grenoble, France – two of the institutes that formed today’s Institut NÉEL of the Centre National de la Recherche Scientifique (CNRS), where he has held the position of Directeur de Recherche Première Classe since 2008. From June 01, 2016, he will establish the first center for molecular quantum spintronics of its kind at KIT.

Wernsdorfer was granted a number of high-ranking honors and awards, such as the Agilent Europhysics Prize, the Olivier Kahn International Award, an ERC Advanced Grant of the European Research Council, or the Prix Spécial of the Société Française de Physique.

A video presenting the research conducted by Wolfgang Wernsdorfer can be found on the website of the Alexander von Humboldt Foundation:
http://www.humboldt-professur.de/content/1-preistraeger/01-preistraeger-2016/8-wernsdorfer-wolfgang/00-wernsdorfer-de.mp4

The Alexander von Humboldt Foundation grants the Alexander von Humboldt Professorship to leading researchers in all disciplines worldwide, who have been working abroad so far. The winners have been nominated by German universities and research institutions and are now to establish internationally competitive teams and structures to conduct cutting-edge long-term research at German universities. The prize money in the amount of up to EUR 5 million is to cover the first five years of research in Germany. It is financed by the Federal Ministry of Education and Research. The Humboldt Professorship provides German universities with the opportunity to attract excellent international researchers and to strengthen their profile in worldwide competition.

In total, six winners were chosen in 2016. In the future, they will continue their research in Bielefeld, Bonn, Halle/Leipzig, Karlsruhe, Munich, and Munster.

More information may be obtained at www.humboldt-professur.de/en.