Adaptation to Climate Change in Baden-Württemberg 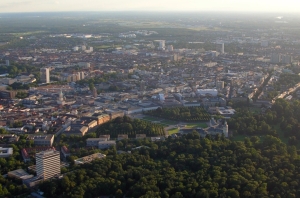 Adaptation to climate change is a big challenge for cities and municipalities in Baden-Württemberg. (Photo: H. Schipper/KIT)

Hot spells, extreme rains, fine dust alarms – climate change is perceptible in the regions, also in Baden-Württemberg, the warmest region in Germany. But how do cities react to climate change? A study of KIT now analyzes what increasing precipitation and rising temperatures mean for the concrete acting of city administrations as regards construction materials, snow removal services, forestry, or staff planning. The results are published in a by brochure issued by KIT’s South German Climate Office.

Apart from known climate characteristics, such as “very hot days” with a temperature of 35°C at least and “days with strong rain”, i.e. days with a precipitation rate of 40 millimeters or more, researchers defined about 50 other parameters that may have an influence on agriculture and urban infrastructure. Among them are “ice-free days”, “days for walks” (days, on which citizens would like to go for a walk at around 25°C in dry weather), and “favorable weather conditions for ticks” (temperature of at least 8°C and a relative humidity of 70%). These parameters were coupled with concrete proposals of actions for the cities. “In case of less snow days, winter services can be reduced and snow removal vehicles are used to a smaller extent. This has to be taken into account by a city when planning the staff and purchases of salt. We calculated parameters for e.g. winter services and in this way directly coupled climate sciences with practice-oriented action options for cities,” Hans Schipper, Head of KIT’s South German Climate Office, says.

According to the study, the increasing number of very hot days is a big problem for municipalities in Baden-Württemberg. For the period from 2021 to 2050, the researchers expect up to four very hot days per year. In the reference period from 1971 to 2000, only one very hot day per year occurred on the average. Hence, when selecting greening, heat-resistant tree species should be chosen. In addition, heat-induced damage of road covers will increase and cause higher repair costs. Another problem for urban planning are strong rains that exceed the capacity of the sewers and may rapidly cause floodings. For this reason, the municipalities proposed to construct collection basins or reduce surface sealing.

Identification of close-to-practice climate parameters and their variations due to climate change only were one part of the study. Based on a questionnaire sent to cities in Baden-Württemberg and in-depth conversations with representatives of companies and cities, the present status of adaptation to climate is described.

With these data, scientists can now evaluate the results of regional climate models developed by the KIT Institute of Meteorology and Climate Research. Then, statements can be derived as to how precipitation and temperature will develop in the future. “We observe a global phenomenon with regional impacts,” Hans Schipper emphasizes. “Cities and municipalities need this information to adequately react to climate change.”

KIT’s South German Climate Office is the link between climate research and society and provides media, public organizations as well as decision-makers in industry and politics with scientific information on the climate and impacts of regional climate change. For this purpose, the Office uses research results and expertise of the Institute of Meteorology and Climate Research to which it belongs, of other institutes of KIT, and other institutions in Southern Germany.