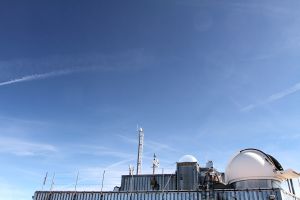 KIT observatory at the Zugspitze with dome for optical vertical sounding of methane and ethane. (Photo: Gabi Zachmann, KIT)

Like carbon dioxide, methane is one of the most important greenhouse gases. After a period of stagnation around 2000, atmospheric methane concentrations started to rise again in 2007. So far, the causes have been unknown. According to the recent study of climate scientists of Karlsruhe Institute of Technology (KIT), at least 40% of this increase result from the growing production of oil and natural gas in the northern hemisphere. The results are now published in the “Atmospheric Chemistry and Physics” journal. (DOI:10.5194/acp-16-3227-2016)

“The attribution to thermogenic methane from the oil and natural gas industry is based on our vertical measurements of ethane and methane concentrations between the ground and the uppermost layers of the Earth’s atmosphere,” says the initiator of the study associate professor Ralf Sussmann of the Atmospheric Environmental Research Division of KIT’s Institute of Meteorology and Climate Research (IMK-IFU). Apart from thermogenic methane formed within deep rock layers at high temperatures and emitted into the atmosphere as a result of oil and gas production, growing biogenic emissions by anaerobic processes are another cause, he says. The corresponding contributions from e.g. wetlands or animal husbandry are presently being analyzed in parallel by other research teams. Ethane is essential for quantifying the contribution of thermogenic methane. Like methane, it is a hydrocarbon compound and one of the main components of natural gas. “In case of biogenic methane sources, no ethane is produced,” Petra Hausmann, doctoral student in the team of Sussmann, explains.

The study is based on long-term measurements by the KIT observatory at the Zugspitze summit and by climate researchers of the National Institute of Water and Atmospheric Research in Lauder, New Zealand. The measurements are representative of the background concentration of methane and ethane in both hemispheres of the Earth. While measurements at the Zugspitze show a significant correlation between ethane and methane, i.e. a sudden increase of the concentrations of both trace gases from 2007 onwards, the Lauder scientists have observed a similar renewed increase for methane only. From these measurement results, the scientists concluded that at least 40% of the worldwide methane concentration increase after 2007 have to be attributed to the oil and gas sector and that the emissions took place in the northern hemisphere. 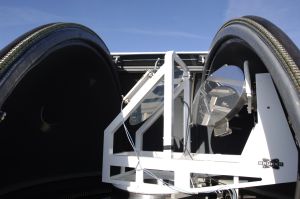 Although latest studies of biogenic sources by colleagues from New Zealand revealed that the main contribution to the renewed methane concentration increase after 2007 is of biogenic origin (Schaefer et al. in Science), „this is  in agreement with our result of an at least 40% share of thermogenic emissions“, Sussmann explains. He points out that increasing emissions from the oil and natural gas sector, combined with emissions from wetlands and maybe animal husbandry increasingly appear to have caused the renewed increase in methane concentration in the last decade. 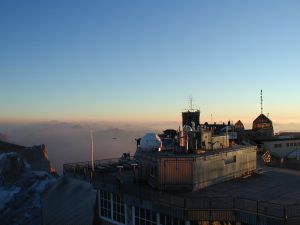 For the time until a complete changeover to renewable energy sources, natural gas still is considered the climate-friendlier alternative to coal, because its combustion produces about half as much carbon dioxide only. Hydraulic fracturing of rock layers (“fracking”) for the unconventional extraction of natural gas is discussed as a bridging technology.

The KIT study showing a thermogenic methane emission increase in the northern hemisphere since 2007 also is of political relevance since the results also suggest a connection to the North American oil and natural gas boom that started at about the same time ten years ago. Given that most of the oil and gas boom of the last decade has occurred in the US this would contradict official estimates of the US Environmental Protection Agency (EPA) that reports constantly low or even decreasing methane emissions from the oil and natural gas sector in the US during the past ten years. Recently, a related study made in the USA on the basis of satellite data showed an increase in American methane emissions by more than 30% between 2002 and 2014 (Turner et al. in Geophysical Research Letters). Also this result contradicts EPA’s findings of no significant anthropogenic methane emissions in the USA, Sussmann says.

According to Ralf Sussmann, at least part of these inconsistencies might be explained by the calculation of too small leak rates for the production and use of oil and natural gas. While the EPA uses extrapolations of random samples at individual wells sites and power plants (bottom-up estimate), the study of KIT uses representative atmospheric background measurements (top-down method). A current example of a gas leak is that in the Californian Alison Canyon, from which about 100,000 tons of methane were emitted between October 2015 and February 2016.

“On long-term scales of several decades, natural gas generally is to be expected to have a climate advantage. On shorter time scales, however, this climate advantage already fails to take effect, if the leak rates of natural gas production exceed a relatively low threshold value of a few percent only,” Sussmann says. The reason: The methane leaking into the atmosphere is shorter-lived, but, at the same quantity, has a much stronger greenhouse effect than carbon dioxide.

The KIT scientists see further need for research to explain the discrepancy between official extrapolations and scientific measurements. Moreover, far-reaching technical development concepts to reduce natural gas leak rates have been adopted in the USA. “Rapid and wide implementation of these reduction measures will decide on whether unconventional natural gas production may be a climate-friendly alternative to coal combustion on shorter time scales,” Ralf Sussmann adds.