Gisela Lanza Receives Cross of the Order of Merit 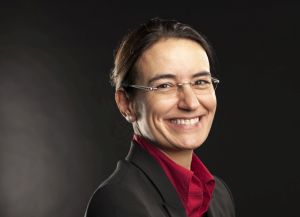 Gisela Lanza explores global production strategies – and she is dedicated to the promotion of young scientists. (Photo: Markus Breig, KIT)

Professor Gisela Lanza of Karlsruhe Institute of Technology (KIT) is awarded the Cross of the Order of Merit of the Federal Republic of Germany by President Joachim Gauck on March 7. On the eve of International Women's Day, the President honors 24 women for their outstanding achievements in culture and science. Gisela Lanza receives the distinction for her research in the field of production engineering and her commitment to the promotion of young scientists.

Planning and designing production systems in global production networks is the focus of Professor Gisela Lanza’s research. At KIT, the engineer is Head of the “Production Systems” Group of the Institute of Production Science (wbk). Here, she develops methods and models that enable high-quality and yet cost-effective production. "This involves, among other things, how companies can shape and implement the transition to an automated and intelligent production in the sense of ‘Industry 4.0'", Lanza says. In doing so, she puts particular emphasis on production in global production networks: "Today, the production of complex products is distributed over various locations throughout the world." Thus, a basic understanding of important markets such as China is vital, she says. Therefore, Lanza, who is also KIT’s representative for China, founded a branch office of her institute in Suzhou: The Global Advanced Manufacturing Institute (GAMI). At GAMI, the theoretical understanding of global production structures is used to create concrete, robust, and locally adapted networks for industrial enterprises. Since 2014, the GAMI has also been acting as KIT’s official representative office in China.

As Germany’s first shared professor, Lanza, who studied industrial engineering and has a PhD in mechanical engineering, combined her teaching and research activities at KIT with management tasks in the automotive industry for four years.

Not least, the award also recognizes Gisela Lanza’s commitment to young scientists: She addresses students and young researchers from around the world not only with her lectures at KIT’s Department of Mechanical Engineering and the HECTOR School of Engineering and Management of the International Department of KIT, but also with strongly involving the GAMI in research and teaching at KIT. 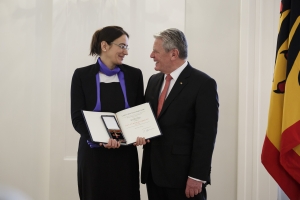 Photo: Bundesregierung / Sandra Steins
Journalists who would like to use the picture, please contact the Bundesbildstelle directly: bilderdienstAkg8∂bpa bund de

Gisela Lanza, born in 1973, studied industrial engineering at the former University of Karlsruhe (TH) and received her doctorate at its Department of Mechanical Engineering in 2004. For her dissertation on "Simulation-based start-up support based on the quality capabilities of production processes" she received the 2005 Erna Scheffler Award of the Soroptimist Club Karlsruhe, followed by the Heinz Maier-Leibnitz Prize of the Deutsche Forschungsgemeinschaft (DFG) in 2009, which is the most important award for young scientists in Germany. From 2008 to 2012, she held KIT’s first shared professorship "Global Production Engineering and Quality" in cooperation with Daimler AG. Since 2012, she has been holding the professorship “Production Systems and Quality Management” and heading the Institute of Production Science of KIT. Lanza is a member of various national and international committees, including the International Academy for Production Engineering – CIRP, the German Academy of Science and Engineering acatech, the wgp Scientific Society for Production Engineering, and the jury of the Erwin Schrödinger Prize of the Stifterverband as well as the steering committee of the Allianz Industrie 4.0 Baden-Württemberg.