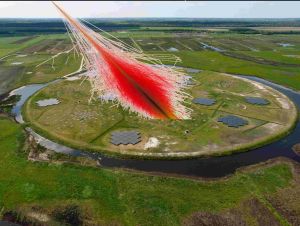 This composite photograph illustrates a particle shower hitting the detector field in the center of the LOFAR telescope in Exloo, the Netherlands. (Photo: ASTRON/KIT)

When cosmic rays hit the Earth’s atmosphere, their high-energy primary particles generate an “air shower” of secondary particles. These cascades of particles provide information on the physical properties of the primary particles, the origin of which has been studied by astrophysicists for generations. Measurements of LOFAR (Low Frequency Array), the biggest radio telescope worldwide, provide new findings on the mass and potential sources of the particles, as is now published in the journal “Nature”. KIT is one of the project partners. DOI: 10.1038/nature16976

“After ten years of research, we now understand the radio signals of these particle cascades so well that we can draw conclusions with respect to the properties of the primary particles using detailed measurements and their comparison to our simulation code,” Tim Huege of the Institute of Nuclear Physics of KIT reports. Recent results found a surprisingly high number of light particles, protons and helium nuclei, at energies of 10 to the power of 17 to 10 to the power of 17,5 electron volts. “This gives rise to questions,” Huege says.

In this relatively high energy range, preferably heavy particles have been found so far, which may arise from supernova remnants. This might suggest that the light particles detected now are of extragalactic origin or – the more exciting option – that a particularly energy-rich source exists in our galaxy. Experts already know that particle flux from galactic sources stops somewhere and cosmic rays of highest energies can be produced in the most energetic extragalactic sources only. Yet, it is still unknown in which energy ranges this transition takes place. Recent analysis of the LOFAR data has now opened up a new perspective on this question. Such research would not be possible without the simulation code CoREAS (CORSIKA-based Radio Emission from Air Showers) developed at KIT. “With this code, we evaluate the measurements of the radio antennas and interpret the signals precisely,” Huege explains. Up to 100 simulations may be required to exactly classify a signal. “CoREAS is used by astroparticle physicists worldwide to interpret radio emissions from air showers.”

Several hundred LOFAR antennas in Exloo, the Netherlands, measure the arrival direction, energy, and mass of the particles. For the precise determination of the mass, the depth of penetration of the air showers into the Earth’s atmosphere, briefly called Xmax, is needed. It can be determined reliably and continuously by simulations only. “Light particles penetrate deeper than heavy ones,” Huege explains. “The Xmax value, hence, indicates particle composition.”

CoREAS is the result of ten years of development work at KIT. This simulation code is implanted in the CORSIKA code (Cosmic Ray Simulation for KASCADE) that was used in particular for KIT’s KASCADE-Grande particle detector experiment and the LOPES radio prototype experiment operated until 2013. Within the framework of the Pierre Auger Observatory, an international astrophysical large-scale experiment in Argentina with major contributions by KIT and other German universities, CORSIKA is being further developed and continuously complemented with new interaction models. CORSIKA was launched in 1989 and has been cited by nearly 700 peer-reviewed scientific publications of air shower experiments worldwide.