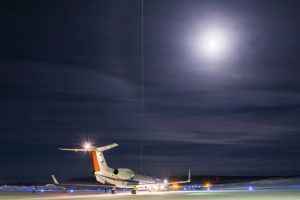 This winter, the Arctic stratosphere so far has been unusually cold. Hence, all prerequisites are given for strong ozone depletion in the next weeks. This conclusion is based on first results of the POLSTRACC measurement campaign, coordinated by Karlsruhe Institute of Technology (KIT), that has been conducted in the Arctic since December 2015. Of particular importance are vertically extended polar stratospheric clouds that have been observed to cover wide areas of the Arctic. At their surface, chemical reactions take place, which constitute the ground for ozone depletion. This winter, these clouds have been observed down to the lowermost stratosphere, which is very unusual for the Arctic.

“For a period of several weeks, wide areas of the Arctic were covered by polar stratospheric clouds between about 14 and 26 kilometers height. Such conditions are more likely in the Antarctic ozone hole than in the typically much warmer Arctic,” Björn-Martin Sinnhuber, KIT, says. He coordinates the POLSTRACC measurement campaign together with his colleague Hermann Oelhaf. At the surface of polar stratospheric clouds, chemical reactions take place, converting passive chlorine compounds into reactive compounds that trigger stratospheric ozone depletion. In addition, particles of these clouds may descend and withdraw reactive nitrogen from the chlorine-activated layer – active chlorine is one of the substances mainly responsible for ozone destruction. The consequence: Active chlorine buffering is lacking and ozone depletion is enhanced or extended. Actually, the scientists have already observed a redistribution of reactive nitrogen and signs of chlorine activation during measurement flights earlier this winter. 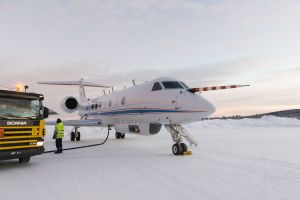 Refueling for the next flight: From early January to early February, the first measurement phase was executed from Kiruna in Sweden, phase two will start in late February. (Photo: Laila Tkotz, KIT)

Investigating the polar stratosphere under the impact of climate change is the goal of the measurement campaign “The Polar Stratosphere in a Changing Climate” (POLSTRACC), carried out with the German research aircraft HALO. Partners in the campaign are the German Aerospace Center (DLR), Forschungszentrum Jülich (FZJ), the Universities of Frankfurt, Mainz, Heidelberg, and Wuppertal, and the Physikalisch-Technische Bundesanstalt (PTB, national metrology institute of Germany). First research flights were made in December from Germany. Between early January and early February, a total of eight research flights with nearly 70 flight hours were made from Kiruna in northern Sweden to study the Arctic stratosphere up to the North Pole. The campaign is supported by ground-based measurements at various stations, analysis of satellite data, and model calculations. 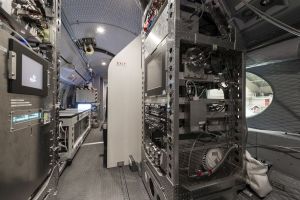 “We were very much surprised to find polar stratospheric clouds down to heights of about 14 km,” Björn-Martin Sinnhuber says. “These are conditions we know from the Antarctic, but they are highly unusual in the Arctic,” Hermann Oelhaf adds. Every spring, an ozone hole forms above the Antarctic due to very cold stratospheric conditions there. In contrast to this, strong ozone depletion above the Arctic was observed in a few cold winters only. Ozone depletion is caused by chlorine and bromine substances emitted in the form of chlorofluorocarbons (CFC) and other substances in the past decades. The production of these substances has been regulated and largely prohibited already for more than 20 years by the Montreal Protocol and further international agreements on the protection of the ozone layer. Nevertheless, previous emissions will remain in the atmosphere for many decades as the ozone depleting substances decompose very slowly. Chlorine and bromine have a particularly high ozone-depleting effect when it is very cold for a sufficiently long period of time. “This is where climate change comes in: While the increase in greenhouse gases leads to the warming of atmospheric layers close to the ground it causes a cooling of the stratosphere. And this may cause massive ozone depletion even in case of reduced loads of chlorine and bromine,” Oelhaf points out. To what extent climate change due to the emission of greenhouse gases may favor the formation of an “ozone hole” in the Arctic stratosphere is an important topic of the POLSTRACC campaign.

Further dissemination of the video file, also in parts, for pedagogic, journalistic or private purposes is permitted, if the source (Karlsruhe Institute of Technology) is indicated. Use or reproduction for purposes other than those mentioned above or dissemination for commercial purposes shall not be permitted.

In the last week of February, the researchers will again set out for the Arctic to observe until mid-March the further development in detail. “Then, it will turn out whether the conditions observed now really lead to a strong ozone depletion or whether a currently observed warming of the stratosphere will prevail and may mitigate ozone depletion this winter,” Sinnhuber explains. Work then will also focus on studying to what extent chlorine-activated and ozone-depleted air masses will make its way into the densely populated middle latitudes.