KIT Scientists Have Solved a Big Mystery of Biology: Bacteria Can See and Move towards a Light Source, because They Function like Human Eyeballs 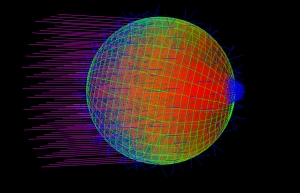 Miniaturized eyeball: The model of a cyanobacterium shows how light is bundled at one point on its way through the cell. (Figure: Ronald Kampmann/KIT)

A 300-year old mystery of biology has been solved. A team of researchers from Germany, the United Kingdom, and Portugal has found that cyanobacteria – microscopically small protozoa existing worldwide – use the functioning principle of the lens eye to perceive light and move towards it. The key to solving this mystery was an idea developed in Karlsruhe: Jan Gerrit Korvink, Professor at KIT and Head of the Institute of Microstructure Technology (IMT), used silicon plates and UV light to measure the refraction index of the protozoa.

Cyanobacteria have been populating the earth for more than 2.5 billion years now and exist everywhere where there is light: In ice, in deserts, rivers, and lakes, but also on house walls and in aquariums. They are capable of photosynthesis and produce their energy with the help of light. In the oceans covering about 70% of the earth’s surface, oxygen-producing cyanobacteria are among the most important photosynthetically active organisms and, hence, represent one of the cornerstones of the biosphere.

Light as a central source of energy is of vital importance to cyanobacteria. Although they consist of a single cell only, they are able to move directly and precisely towards a source of light. For three hundred years, since the invention of microscopes, however, it has been a mystery how this light perception works. Now, this mystery is solved. Researchers of KIT, Freiburg University, Queen Mary University, London (QMUL), and other institutions in the United Kingdom and Portugal found out that cyanobacteria function like tiny lens eyes. They can perceive the direction of light and react to it. The study has now been published in the scientific journal “eLIFE”.

“Cooperation started during a lunch we had in Freiburg,” says Jan Gerrit Korvink, Head of the Institute of Microstructure Technology (IMT) of KIT. “Conrad Mullineaux, professor at QMUL, was visiting the working group of Professor Annegret Wilde in Freiburg and asked me whether I knew a way to measure the refraction index of a small bacterium. The refraction index describes an important optical property of lenses refracting light.”

“First, I had to disappoint Conrad Mullineaux: Bacteria with a diameter of 3 micrometers, i.e. thee millionths of a meter, are so small that there are no instruments to measure refraction. But I could not get this question out of my head and finally an idea came to my mind,” the professor explains.

Korvink and his team at KIT coated a flat silicon disk of about ten centimeters in diameter with an extremely thin layer of a photopolymer that hardens under ultraviolet light. Then, they placed some cyanobacteria onto the polymer and exposed the disk to UV light.

“Everywhere, where no bacteria were located, the light fell homogeneously onto the disk and the polymer hardened homogeneously. But in areas with bacteria, the light was bundled. It formed a concentrated nano jet of photons, such that the polymer below the bacteria hardened in a certain pattern,” Jan Gerrit Korvink explains.

In the next step, the researchers of KIT chemically fixed the photopolymer and determined the surface structure using an atomic force microscope. In this way, they succeeded in reproducing light refraction by bacteria. “Finally, we determined and predicted the light bundling properties of cyanobacteria with the help of a simulation.”

The First “Eye” in Evolution?

By additional studies, the international team of researchers confirmed that a single cyanobacterium indeed functions like a small human eyeball. Light arrives on the surface of the round unicellular systems, where it is refracted as if these protozoa were microscopically small lenses. A focal point is produced on the opposite side of the cell. In the area of the light point, small, filamentary extensions outside of the cell are activated, which make the bacterium move towards the light.

“Cyanobacteria are the earliest organisms we know from fossil finds,” Jan Gerrit Korvink says. “In an, admittedly, very primitive form, the bacterial cells function like small human eyeballs. Perhaps, this was the first time in evolution that the generation of early cyanobacteria gave rise to a mechanism of light perception comparable to the lens eye. A fascinating idea!”