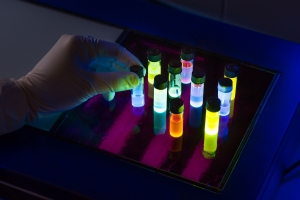 Thanks to knowledge of their quantum mechanics, dyes can be customized for use in organic light-emitting diodes. (Photo: KIT)

Use of copper as a fluorescent material allows for the manufacture of inexpensive and environmentally compatible organic light-emitting diodes (OLEDs). Thermally activated delayed fuorescence (TADF) ensures high light yield. Scientists of Karlsruhe Institute of Technology (KIT), CYNORA, and the University of St Andrews have now measured the underlying quantum mechanics phenomenon of intersystem crossing in a copper complex. The results of this fundamental work are reported in the Science Advances journal and contribute to enhancing the energy efficiency of OLEDs.

Organic light-emitting diodes are deemed tomorrow’s source of light. They homogeneously emit light in all observation directions and produce brilliant colors and high contrasts. As it is also possible to manufacture transparent and flexible OLEDs, new application and design options result, such as flat light sources on window panes or displays that can be rolled up. OLEDs consist of ultra-thin layers of organic materials, which serve as emitter and are located between two electrodes. When voltage is applied, electrons from the cathode and holes (positive charges) from the anode are injected into the emitter, where they form electron-hole pairs. These so-called excitons are quasiparticles in the excited state. When they decay into their initial state again, they release energy.

Excitons may assume two different states: Singlet excitons decay immediately and emit light, whereas triplet excitons release their energy in the form of heat. Usually, 25 percent singlets and 75 percent triplets are encountered in OLEDs. To enhance energy efficiency of an OLED, also triplet excitons have to be used to generate light. In conventional light-emitting diodes heavy metals, such as iridium and platinum, are added for this purpose. But these materials are expensive, have a limited availability, and require complex OLED production methods.

It is cheaper and environmentally more compatible to use copper complexes as emitter materials. Thermally activated delayed fluorescence (TADF) ensures high light yields and, hence, high efficiency: Triplet excitons are transformed into singlet excitons which then emit photons. TADF is based on the quantum mechanics phenomenon of intersystem crossing (ISC), a transition from one electronic excitation state to another one of changed multiplicity, i.e. from singlet to triplet or vice versa. In organic molecules, this process is determined by spin-orbit coupling. This is the interaction of the orbital angular momentum of an electron in an atom with the spin of the electron. In this way, all excitons, triplets and singlets, can be used for the generation of light. With TADF, copper luminescent material reaches an efficiency of 100 percent.

Stefan Bräse and Larissa Bergmann of KIT’s Institute of Organic Chemistry (IOC), in cooperation with researchers of the OLED technology company CYNORA and the University of St Andrews, United Kingdom, for the first time measured the speed of intersystem crossing in a highly luminescent, thermally activated delayed fluorescence copper(I) complex in the solid state. The results are reported in the Science Advances journal. The scientists determined a time constant of intersystem crossing from singlet to triplet of 27 picoseconds (27 trillionths of a second). The reverse process – reverse intersystem crossing – from triplet to singlet is slower and leads to a TADF lasting for an average of 11.5 microseconds. These measurements improve the understanding of mechanisms leading to TADF and facilitate the specific development of TADF materials for energy-efficient OLEDs.