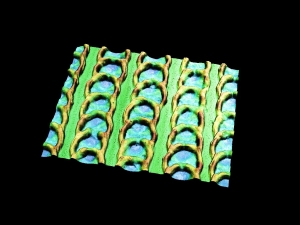 Inspired by nature and milled into a steel bolt by a laser: 3D photo of the scale-like structure. (Photo: Christian Greiner, KIT)

A snake moves without legs by the scales on its belly gripping the ground. It generates friction at the points needed to move forwards only and prevents its scales from being worn off by too much friction. Researchers of KIT have found a way to transfer this feature to components of movable systems. In this way, durability of hip prostheses, computer hard disks or smartphones might be enhanced. Their results are published in the journal “Bioinspiration & Biomimetics”. DOI: 10.1088/1748-3190/10/4/044001.

“Friction and wear are two of the biggest challenges in systems of several individual components,” Christian Greiner of the Institute for Applied Materials says. A solution is found in nature: Snakes, such as the ball python, or lizards, such as the sandfish skink, use friction to move forwards, but can reduce it to a minimum thanks to their scales. Together with Michael Schäfer, Greiner developed a process to transfer the scale structure of reptiles to components of electromechanical systems: With a fiber laser, they milled scales into a steel bolt of 8 mm in diameter.

With the help of two different structures, the materials researchers tested whether the distance of the scales influences friction behavior. In the first structure, the scales overlap and are located very closely to each other, such as the scales on the belly of a ball python. The second structure consists of scales arranged in vertical rows at a larger distance, such as the skin of a sandfish skink. “The distance between the rows in our experiment was the smallest possible distance we could produce with the laser. The structure, hence, does not entirely correspond to that of the sandfish skink,” Greiner says. In the future, however, the researchers plan to produce structures that are closer to the original in nature. Every scale is 5 µm high and has a lateral dimension of 50 µm (10-6 meters). This corresponds to about the diameter of a hair. In nature, the scales of a snake are about 300 to 600 nm (10-9 meters) in size. The scales of a sandfish have a size of 2 x 3 mm (10-3 meters). Hence, the size of the lasered scales does not correspond to that of the reptile scales. However, another project of the KIT scientists revealed that the change of the size does not necessarily lead to the artificial structure being less effective than the natural one: To simulate the “adhesive” and self-cleaning properties of gecko feet, the researchers used elastic microhairs that were up to 100 times bigger than those of the animals, but had the same adhesive power. A detailed description of the project can be found at: www.kit.edu/kit/english/pi_2014_14709.php.

To find out whether scales reduce friction, Greiner and Schäfer fixed the structured surface of the bolts to a rotating plate. The experiments were carried out without and with a lubricant (1 ml of mineral oil). For the experiments with oil as lubricant, the scientists used steel disks. Under dry sliding conditions, sapphire disks were applied. The disk diameter was 50 mm.

Experiments under lubricated conditions revealed that both narrow and wide arrangements of the scales increase friction compared to the unstructured bolt: By the wide scales, friction is increased by a factor of 1.6. The narrow scales increase friction by a factor of 3. In the non-lubricated state, the wide scale structure reduced friction by more than 40 percent, while friction was reduced by 22 percent in case of a narrow scale structure.

The finding that the narrow scale structure increases friction under both lubricated and non-lubricated conditions had not been expected by the researchers: “We assumed that the narrow structure is more effective, as it is closer to nature,” Greiner says. They succeeded in excluding that the smaller friction was caused by a surface modification due to the laser: “On and between the scales, the material was softer than the untreated material. Only the edges cut by the laser were harder and they had no contact with the rotating disk. Hence, we concluded that the scales reduce friction,” Greiner says.

Now, the materials researchers plan to test how friction of the bolt is changed when the size of the scales is varied or harder material is used.