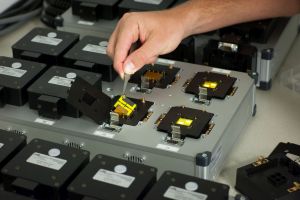 Organic light-emitting diodes (OLED) can be produced easily and at low cost. Thanks to compostable materials, they are also made sustainable. (Photo: KIT).

Every year, almost two million tons of electronic scrap arise in Germany. Printed electronics enhances the trend to throw used devices away by reducing production costs and opening up new markets with disposable items, such as interactive packagings or smart band aids. Young researchers at Karlsruhe Institute for Technology (KIT), hence, develop printed electronics made of compostable natural materials and processes for industrial production. The Federal Ministry of Education and Research funds the Young Investigator Group with a total of EUR 1.7 million for a period of four years.

Semiconductors and dyes made of plant extracts or insulators made of gelatin, the young researchers use easily biodegradable materials. “These may not be as long-lived as the inorganic alternatives, but they easily survive the service life of disposable electronics,” says Dr. Gerardo Hernandez-Sosa, leader of the Biolicht Young Investigator Group of KIT. After use, he says, the electronics can simply be thrown away into the biowaste bin or on compost heaps, where it will rot like a banana skin.

So far, this has not been the case for conventional printed electronics, such as organic light-emitting diodes (OLED). “We call all synthetic materials that are based on carbon “organic”. But this term does not tell us anything about environmental compatibility,” Dr. Hernandez-Sosa explains. For instance, the carrier foil of OLED – the paper equivalent for electronic inks – is made of the same plastic material as conventional beverage bottles. The Biolicht group only uses easily biodegradable materials that can be found in nature. Starch, cellulose, or chitin are suited as carrier foils, for instance. The scientists hardly use metals or metalloids, such as silicon. The advantages of plastic materials: They are bendable, cheap, and can be processed into miles of printing foil. By means of this technology, it is possible to produce on the industrial scale e.g. stickers with an electronic traffic light indicating shelf life or band aids with incorporated sensors to monitor the healing process.

First, electronic components have to be printed onto the compostable foils similar to letters onto paper. Their function depends on the ink used: Instead of dye particles, conducting, semiconducting or non-conducting, i.e. insulating, materials are dissolved in the ink. Upon application, the liquid solvent dries and the remaining layer forms the corresponding component. Work of the Young Investigator Group is aimed at developing biodegradable inks adapted to the new foil material and suited for printing with existing equipment. ”Manufacturers of organic electronics can swap to environmentally compatible materials without having to exchange their printer arsenal,” Dr. Hernandez-Sosa says.

For the inks, the young scientists now have to identify environmentally compatible materials with the desired electrical properties. Hard gelatin that is used for making drug capsules is suited for insulation, for instance. Selection of the solvent also requires a large expenditure: It has to be in liquid form at temperatures used for printing. Contrary to conventional ink, it must not penetrate into the carrier material, but should form a closed liquid film on it without dripping off. A solvent that is too thick plugs the pores of the printer. A solvent too thin disperses on the carrier foil and does not cover it homogeneously. The properties of the dry material film, however, are crucial to the function of the electronic components: Its thickness that is less than a thousandth of a millimeter must not vary by more than 5%. The scientists expect to have compostable organic electronics ready for the market three years from now.

The Biolicht Young Investigator Group is affiliated to the KIT Light Technology Institute. Its laboratories are located at the InnovationLab, Heidelberg, an application-oriented research and transfer platform of science and industry. It is funded by Karlsruhe Institute of Technology, the companies of BASF SE, Merck, Heidelberger Druckmaschinen AG, and SAP AG, as well as by the University of Heidelberg.

Video on the project: