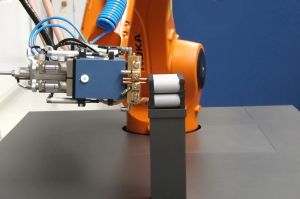 Manufacture of the power capacitor module: A robot welds cells to form modules that are then connected to an energy storage system. (Photo: KIT)

The concept of the energiewende inherently includes smart energy use. But there is not yet any storage system that could be used by industry to efficiently recover braking energy of the many machines in Germany. A hybrid storage system combining the properties of batteries and capacitors would be needed for this purpose. Further development of these hybrids, called power caps, is now pushed by KIT and its cooperation partners under the FastStorage BW II project that is funded with EUR 25 million by the state of Baden-Württemberg.

“Efficient use of resources also requires recovery of energy,” says Thorsten Grün, KIT, who coordinates work under the project FastStorage BW II at KIT. “For this, we want to make available appropriate storage systems.” So far, electric energy has mainly been stored in batteries or capacitors. But for many applications in industry, both components are far from optimal: A battery can take up much energy and store it for a long term, but needs long charge times, has a limited service life, and the number of charge cycles is limited. A capacitor quickly takes up energy and is long-lived, but does not have the storage capacity and storage duration of a battery.

The solution is now developed under the FastStorage BW II project: A hybrid system combining the strengths of both energy storage systems. The hybrid storage systems, called power caps or hybrid capacitors, consist of two large-area electrodes. Unlike conventional capacitors, the electrodes are not set up identically. Instead of a dielectric, an electrolyte is located between them and supplies positive ions. Similar to a battery, one electrode consists of metal oxides. Here, a redox process takes place. The second electrode is made of carbon material similar to a capacitor. Unlike the battery, however, energy is not stored in a chemical reaction, but in the electric field between positive ions and electrons. The redox-active materials in the capacitor increase effective operation voltage and electric field density, which directly leads to a superproportional increase in the storage capacity of the capacitor. Power caps can store twice as much energy as classical capacitors and theoretically supply up to ten times more electric power than a battery.

KIT now develops, constructs, and tests prototype storage systems made of power cap cells: Semi-automatic welding of storage modules by robots and optimization of welding parameters and process speed are studied. An appropriate housing is designed to ensure homogeneous cell loading and sufficient cooling. Development of a suitable electronic operation control is of central importance. It is to control safe and economically efficient operation of the module. In this area, KIT researchers can use their vast experience gained from battery management systems.

The researchers plan to test their first prototypes in intralogistics, e.g. in electrically operated stacker cranes, forklifts or autonomous transport systems in high rack warehouses or production halls. “During every lifting or braking movement, energy can be recovered and stored in the power cap,” Grün says. Here, power caps might make energy recovery more efficient or possible in the first place. At the same time, they would increase the availability of grid-independent electrical transport helpers due to shorter charge times.

Power caps can be applied in all areas, where power demand is heterogeneous. For instance, they may be used for uninterruptable power supplies or frequency control in power grids. Moreover, they might be of interest for production companies with a high electricity consumption, as expensive load peaks can be reduced by buffering power consumption.

“Apart from technical feasibility, the project also focuses on the economic efficiency of these hybrid solutions,” Olaf Wollersheim, Head of KIT’s Competence E Project, explains. “Particular attention is paid to using inexpensive and environmentally compatible materials and processing chains.” The power caps developed are to contribute to obtaining know-how on energy storage cells. This knowledge is an absolute necessity for coping with the increasing energy demand and supply fluctuations in the area of renewable energies. Power caps may open up entirely new options in the storage of electricity.

As a follow-up project of FastStorage BW I, under which a market analysis of the potentials and applications of power caps was made, the FastStorage BW II project is to serve as a basis for a facility for series production of power caps in Baden-Württemberg. The project is financed with a total of EUR 25 million by the Baden-Württemberg Ministry of Finance and Economics and coordinated by the Fraunhofer Institute for Manufacturing Engineering and Automation (IPA), Stuttgart. Apart from KIT, VARTA, SEW, Viastore, Fraunhofer ICT, ISW, EEP, ZSW, Freudenberg, IFSW, FESTOOL, Daimler, and Porsche are the project partners.

The Competence E Project of KIT covers all economically relevant research aspects from the battery material to the electric storage system in a way that is unique in Germany. With an open technology platform for electric energy storage systems, the systemic approach is aimed at developing industrially applicable solutions and their production methods. This will be an important step towards the energy turnaround and reaching climate protection objectives: Increased storage capacity of stationary storage systems to compensate the fluctuation of renewable energies and enhance the range of electric vehicles for increased acceptance.

For more information on the Competence E Project, click: