It Is Not Money Alone that Motivates Employees

According to an Experimental Study with about 140 Participants, Employees Perform and Work Better, if Financial Incentives Are Accompanied by Motivating Words 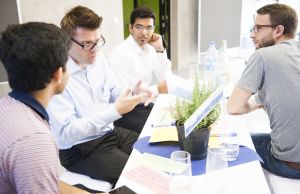 Small signals of appreciation have a decisive influence on the output and quality of the work of employees. A field experiment of KIT economist Petra Nieken and two colleagues revealed that a combination of performance-oriented piece wage and motivating words increases the performance by 20% and reduces the error rate by 40%. (DOI:10.1016/j.euroecorev.2015.03.003)

“Our results are relevant to entrepreneurial practice,” Nieken emphasizes. She holds the Chair for Human Resources Management of KIT’s Institute of Management. How can staff members be motivated? Theory lists two instruments: Financial incentives, such as bonuses or piece wages, and the capability of executives to motivate their staff members. The question whether and how these two instruments complement, strengthen or weaken each other, however, is not clearly answered by theory. That is why this question was in the focus of the study performed at Bonn University.

In the field experiment, 139 students were given the task to electronically acquire data for a research project. Data acquisition was simple, but required a certain degree of attention and care. The test persons were all paid the same basic salary, but one group received an additional, but small performance-dependent piece wage. Every salary group was divided into two partial groups. The test persons of one group were informed in a few sentences prior to work about the purpose of their task and they were told that their work was appreciated and that their work results would have positive impacts.

This experiment allowed to observe both individual effects and the interaction of the motivation tools. It was found that a few motivating words resulted in an improvement of performance only, if they were accompanied by a performance-based payment. If an extra performance-based payment was made, but motivating words were lacking, this resulted in decreased performance and more errors. This loss or weakening of intrinsic motivation is comparable to children losing interest in drawing without a reward from outside, if they have repeatedly received money for drawing a picture before.

Combination with acknowledging, appreciating words is decisive for this negative effect being eliminated. This is the major finding of the experiment performed by Nieken and her colleagues Anja Schöttner, Humboldt-Universität Berlin, and Ola Kvalø, University of Stavanger, Norway. In the study, combination of an appreciation with an extra salary in the amount of about 10% of total wage resulted in a performance increase by 20% and a parallel reduction of the error rate by 40%. “We hoped to obtain such a result, but we did not expect it to be so clear,” the KIT scientist says. She also works as an associate professor at the University of Stavanger and has been conducting experimental economics research for ten years now.

The scientists recently reported the results of their study at the meeting of the European Economic Association, the biggest economist association of Europe, in Mannheim. The study was published under the heading “Hidden benefits of reward: A field experiment on motivation and monetary incentives,” Ola Kvalø, Petra Nieken, Anja Schöttner, in the European Economic Review.
doi: 10.1016/j.euroecorev.2015.03.003