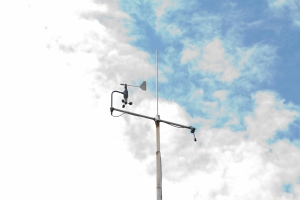 Cities are heat islands. In hot, sunny summers, they store much heat during the day and release it again during the night. Scientists of KIT’s Institute of Meteorology and Climate Research measured temperature at three locations in the Karlsruhe city center during the heat wave in early August. Their result: In a very warm night, the city center was up to 7°C warmer than Rheinstetten in the Karlsruhe surroundings.

In the past weeks, record heat and warm tropic nights determined the everyday life of Germans. Especially people living in the big cities in the Upper Rhine Valley, one of the warmest regions in Germany on the average, suffered from the heat. “Cities are heat islands. Here, it is often some degrees warmer than in the surroundings,” Julia Hackenbruch of KIT’s Institute of Meteorology and Climate Research (IMK) says. “After days with high solar irradiation, this temperature difference during the night is especially pronounced, as cities cool down more slowly than their surroundings. During the day, construction materials store much heat and release it again during the night.”

Within the framework of her doctoral thesis, Julia Hackenbruch wanted to find out how pronounced this difference was to be during the forecast heatwave in early August. For this purpose, IMK scientists installed meteorological measurement masts at three locations in the Karlsruhe city center: On the central cemetery, in a green courtyard in Karlsruhe’s Oststadt (Vincenz-Prießnitz-Straße), and in a sealed courtyard in the Weststadt (Sophienstraße). “Selection of these locations accounts for various building structures and shares of green areas,” Julia Hackenbruch says. “To compare our measurements in the city with temperatures measured in the surroundings, we used the data measured at the Rheinstetten station of the German Weather Service.“ As the measurement stations of the German Weather Service are to be representative of a larger territory and unaffected by the direct surroundings, the temperatures measured there may differ considerably from those measured in front of the own house.

Evaluation of the results indeed revealed big differences between the city and the surroundings as well as within the city center. “The largest difference was found for the night from August 7 to August 8. At midnight, temperature in the Weststadt was still above 28°C, while the temperature at Rheinstetten had cooled down below 22°C already, this is a difference of nearly seven degrees,” Julia Hackenbruch says.

“We also found considerable differences between the three stations in the city center.” Temperatures during the night at the central cemetery dropped to a minimum of 22,7°C, in the Oststadt to 23.4°C, and in the Weststadt they were not below 24.7°C. Hence, people having their bedrooms facing the sealed courtyard in the Sophienstraße especially suffered from the heat.

Maximum daily temperatures also varied considerably. On August 7, Rheinstetten reached a maximum of 37.7°C, the maximum measured at the central cemetery was 38.1°C, and the value recorded in the courtyard of Vincenz-Prießnitz-Straße was 38.6°C. The maximum temperature measured in the sealed courtyard of the Weststadt was lowest and reached 35.2°C only.

How can these differences in the city center be explained? “The fact that the sealed courtyard heats up to a lesser extent at very high ambient temperatures is due to the high building density. The courtyard lies in the shade almost all day long,” Julia Hackenbruch explains. “The courtyard in the Oststadt is not protected from the sun. The green area of the central cemetery is somewhat cooler, as the vegetation evaporates humidity, which causes a slight cooling effect. This effect might have been even stronger, if the green area would not have been dried out already due to the previous heat and lacking precipitation.”

During the night, the sealed courtyard in the Sophienstraße, which is relatively cool during the day, is disadvantageous. Due to the high building density and heat storage by the massive constructions, temperatures remain high and ventilation is poor. The Vincenz-Prießnitz-Straße and central cemetery are somewhat cooler, which is also due to their vicinity to the Hardtwald forest. “During the night, long-wave radiation causes cold air to form on the ground in forests and parks under a cloud-free sky. During the short summer nights, this effect is not that pronounced when the building density is high. The cooler and, hence, heavier air from the green areas slowly enters the neighboring districts of the city. This effect can be felt by a light breeze coming into the city,” the doctoral student of KIT explains.

Her results clearly show that cities are heat islands during warm periods. This circumstance is especially pronounced and uncomfortable during the night on courtyards in the city center that are poorly ventilated. The situation is slightly better in the city outskirts and best in the surrounding areas, where temperatures were up to 7°C lower. The measurements also showed how strongly the city climate varies within the city.