Spoken Sentences Can Be Reconstructed from Activity Patterns of Human Brain Surface / ”Brain-to-Text“ Combines Knowledge from Neuroscience, Medicine, and Informatics 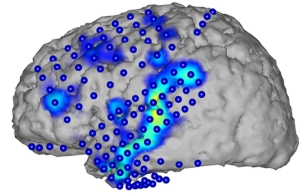 Speech is produced in the human cerebral cortex. Brain waves associated with speech processes can be directly recorded with electrodes located on the surface of the cortex. It has now been shown for the first time that is possible to reconstruct basic units, words, and complete sentences of continuous speech from these brain waves and to generate the corresponding text. Researchers at KIT and Wadsworth Center, USA present their ”Brain-to-Text“ system in the scientific journal Frontiers in Neuroscience (doi: 10.3389/fnins.2015.00217).

”It has long been speculated whether humans may communicate with machines via brain activity alone,” says Tanja Schultz, who conducted the present study with her team at the Cognitive Systems Lab of KIT. ”As a major step in this direction, our recent results indicate that both single units in terms of speech sounds as well as continuously spoken sentences can be recognized from brain activity.“

These results were obtained by an interdisciplinary collaboration of researchers of informatics, neuroscience, and medicine. In Karlsruhe, the methods for signal processing and automatic speech recognition have been developed and applied. ”In addition to the decoding of speech from brain activity, our models allow for a detailed analysis of the brain areas involved in speech processes and their interaction,” outline Christian Herff und Dominic Heger, who developed the Brain-to-Text system within their doctoral studies.

The present work is the first that decodes continuously spoken speech and transforms it into a textual representation. For this purpose, cortical information is combined with linguistic knowledge and machine learning algorithms to extract the most likely word sequence. Currently, Brain-to-Text is based on audible speech. However, the results are an important first step for recognizing speech from thought alone.

The brain activity was recorded in the USA from 7 epileptic patients, who participated voluntarily in the study during their clinical treatments. An electrode array was placed on the surface of the cerebral cortex (electrocorticography (ECoG)) for their neurological treatment. While patients read aloud sample texts, the ECoG signals were recorded with high resolution in time and space. Later on, the researchers in Karlsruhe analyzed the data to develop Brain-to-Text. In addition to basic science and a better understanding of the highly complex speech processes in the brain, Brain-to-Text might be a building block to develop a means of speech communication for locked-in patients in the future.

A video on the functioning of Brain-to-Text:

Karlsruhe Institute of Technology (KIT) is a public corporation pursuing the tasks of a Baden-Wuerttemberg state university and of a national research center of the Helmholtz Association. The KIT mission combines the three core tasks of research, higher education, and innovation. With about 9,400 employees and 24,500 students, KIT is one of the big institutions of research and higher education in natural sciences and engineering in Europe.

Since 2010, the KIT has been certified as a family-friendly university.