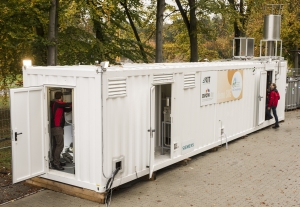 The DemoSNG pilot plant fits into a standard shipping container. It is mobile and can be applied decentrally. (Photo: KIT)

Interlinkage of the power and gas grids is planned to make electricity supply sustainable and robust in the future. Fluctuating amounts of wind and solar power, for instance, might be stored in the form of the chemical energy carrier methane. Researchers of the KIT and DVGW have now proved that this element of the Energiewende is technically feasible. The DemoSNG pilot plant constructed by the KIT will be used in Sweden for the reliable and efficient production of methane from biomass-based carbon dioxide and variable amounts of hydrogen from green power.

“The variable operation modes were the biggest challenge during development,” says Project Head Siegfried Bajohr of the Engler-Bunte Institute (EBI) of KIT. From the products of a biomass gasification plant, i.e. hydrogen, carbon dioxide, and carbon monoxide, the DemoSNG pilot plant directly produces methane and water by means of a nickel catalyst (SNG operation). If green power is available, it is used for electrolysis and the production of additional hydrogen. Then, the volume flow in the plant can be doubled, utilization of carbon from biomass will increase to nearly 100%, and a large amount of usable waste heat will be produced by the catalyst (PtG operation).

“As conventional methanation processes reach their limits at this point, we have developed a new reactor concept,” Bajohr says. The initial feedstock flows meet in a honeycomb catalyst carrier that can be designed for the efficient operation of both modes and mixing states.”The DemoSNG plant shows that our concept also works in a large-scale pilot plant.” Metallic honeycombs are already used as catalytic convertors of exhaust gas in cars. They are characterized by a high thermal conductivity and mechanical robustness with a low pressure loss during alternating operation modes.

The DemoSNG plant was installed into a standard shipping container (12 m x 2.4 m x 2.4 m) and is mobile. The first tests of operation at KIT have now been completed. The plant will be moved to Köping in Sweden. There, it will be integrated into the gas flows of a biomass gasification plant utilizing wooden residues. The honeycomb catalyst can be implemented easily in various plant sizes. In the future, it might be possible to efficiently operate even smaller decentralized units, e.g. at rural biogas facilities.

“DemoSNG shows the way to storing green power and transporting it in our gas grids in the form of methane,” Thomas Kolb, Head of the Engler-Bunte Institute of KIT, emphasizes. Frank Graf, Section Head of the test laboratory of the German Technical and Scientific Association of Gas and Water (DVGW) at KIT, adds: “So far, admixture of hydrogen in the natural gas grid has been limited to a few percent, as storage, distribution, and use require the solution of various technical problems.” Methanation has the advantage that the infrastructure existing for the distribution and storage of natural gas and the standard appliances can be used further without any modifications or readjustments being required. Via an effective methanation, wind and solar power can be fed into the natural gas grid without any limitations.

“DemoSNG demonstrates how sustainable European innovations are,” Karl-Friedrich Ziegahn, Head of the Natural and Built Environment Division of KIT and Chairman of the Supervisory Board of the European KIC InnoEnergy, says. With plants, such as DemoSNG, excessive green electricity can be used much better. For example, it might be converted decentrally with the carbon dioxide produced by the about 800,000 biogas facilities and stored in the form of methane. Thanks to the newly developed honeycomb catalyst, also smaller and medium-sized plants can be operated efficiently.

KIC InnoEnergy combines research with education and innovation in order to accelerate technology transfer and create a sustainable energy system for Europe. KIC InnoEnergy (Knowledge & Innovation Community) is composed of 35 European partners from companies, universities, research institutions, and business schools. It is funded by the EU via the European Institute of Innovation and Technology (EIT).

KIC InnoEnergy initiated the DemoSNG (Demonstration Substitute Natural Gas) project in the amount of EUR 4.5 million. Partners of the project started in 2009 are the University KTH, the company Cortus, the utility company Gas Natural Fenosa, and the coordinator KIT.