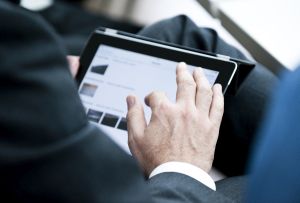 Wireless communication and consumption of digital media might profit from freely accessible transmission frequencies in the UHF range. (Photo: KIT)

The need for the wireless transfer of data will increase significantly in the coming years. Scientists at the Karlsruhe Institute of Technology (KIT) therefore propose to turn some of the TV frequencies that will become free into common property and to use it to extend existing wireless networks (WiFi) instead of using the frequencies for mobile communications. Their study, published in the international journal “Telecommunications Policy,” recommends that the additional frequencies not be marketed but made available to the population and companies at no cost (doi 10.1016/j.telpol.2014.05.003).


Wireless data transmission largely takes place via WLAN networks, such as WiFi. However, these networks are currently limited to high frequency ranges at 2 GHz and above and, hence, have a limited range. The authors of the study, Arnd Weber of the Institute for Technology Assessment and Systems Analysis (ITAS) of KIT and Jens Elsner, a former member of the staff of the KIT Communications Engineering Lab, propose to extend the frequencies for free communication to include lower ranges and even increased transmission power. These bands are being used less and less for the transmission of TV signals. They are highly suited for penetrating obstacles such as walls. Depending on the ambient conditions and by automatically adapting transmission power to prevent interference, such WLAN networks might even reach communication partners at a distance of several kilometers. Even in cities where the transmission capacity will be limited due to the large number of transmission stations, the range of wireless networks could be extended significantly. The networks could, for example, be made available to passersby on neighboring streets for transferring data to and from their smartphones.

“Implementation of our approach would have far-reaching consequences. Individuals, institutions, and companies would be far less dependent on expensive mobile communications networks in conducting their digital communication. This would also be of great economic benefit,” according to Arnd Weber. Even the opening of existing WLAN frequencies in the last century demonstrated that users and companies utilized the new opportunities innovatively to develop new products. Examples besides wireless computer networks are wireless loudspeakers and cameras, remote controls for garage doors, transponders, baby phones, and Bluetooth.

According to Weber, however, a worldwide and broad debate about the approach is required because governments could also use the frequencies to extend the range of state-owned TV channels or auction them to mobile telephony providers at high prices. For this reason, Arnd Weber and Jens Elsner propose discussing their approach at the World Radiocommunication Conference (WRC). This conference, organized by the United Nations, will meet again next year and decides on the use of radio frequencies at the global level.

Study Contradicts Established Economic Theory
In accordance with the systems analysis approach used at ITAS, the study combines technical, social, and economic perspectives. Its conclusion that low frequency ranges should, as common property, be made available at no cost contradicts an established economic theory represented by, for instance, the economist and Nobel Prize winner Ronald Coase, who died in 2013. In his opinion, rights of use should be defined and sold on the market to achieve the optimal use of limited resources such as radio frequencies. According to the economist and political consultant Martin Cave, only the high GHz ranges where there is no risk of congestion should be opened to the public. Elsner and Weber show in their study, in contrast, how such congestion can be prevented technically. They argue that the low-cost approach to electronic communication should be given preference to intensive commercialization not only from the perspective of an individual, but also from that of the national economy. They suggest reserving a 90-MHz interval in the UHF bands. Apart from mobile communication for everyone, applications such as “program making and special events” technology might profit, for instance stage microphones and cameras, which could then transmit digitally instead of using niches of the TV spectrum with analogue technology. Use by disaster relief services is also conceivable.

Jens Elsner has meanwhile joined the Munich Innovation Group. Arnd Weber conducts research at the KIT Institute for Technology Assessment and Systems Analysis (ITAS). He is a member of the International Telecommunications Society. The study by Elsner and Weber is based on work performed under the startup project “User Networks,” financed by funds from the Excellence Initiative at KIT.