Concentration of Ozone Killers on the Rise again 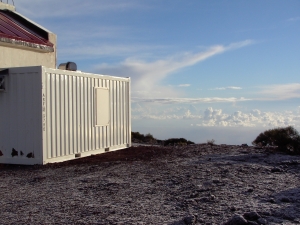 Infrared spectrometers can be used to determine the composition of atmospheric air. The KIT and the Spanish Weather Service jointly operate a measurement container on Tenerife (photo: Thomas Blumenstock, KIT).

Stratospheric hydrogen chloride is an indicator of substances destroying ozone. An international team including scientists of the Karlsruhe Institute of Technology (KIT) observed an annual increase by up to three percent in the HCl content over the northern hemisphere since 2007. However, the scientists were able to show that the rise is due to a change in air circulation, not to higher emissions of the precursor substances of the ozone-destroying substances banned in the Montreal Protocol. They assume that the ozone layer will recover completely over the next 50 years despite the interim HCl rise. The results of the study are now published by the group in Nature (DOE: 10.1038/nature13857).

The ozone layer protects the earth from harmful UV radiation and is an important part of the climate system. That chlorofluorocarbons, CFCs for short, attack the ozone layer was discovered by scientists in the 1980s. Because of their long lifetime, CFCs can rise as high as into the stratosphere, an atmospheric layer at 15 to 45 km altitude also incorporating the ozone layer. CFCs are decomposed by high-energy UV radiation in the stratosphere. The chlorine released in the process is first immoblized in HCl and chloronitrate (ClONO2). Chemical reactions in the polar winter can release the chlorine again and destroy ozone. To protect the ozone layer, 48 countries signed the 1987 Montreal Protocol which puts a worldwide ban on the production of substances such as CFCs. From the mid-1990s, an annual decrease by one or two percent of the harmful chlorine compounds in the stratosphere has been observed.

A network of observation stations all over the world is monitoring the concentrations of various trace gases: Measurements by the “Network for the Detection of Atmospheric Composition Change,” corroborated by satellite measurements, now have shown that the HCl concentration in the stratosphere surprisingly has risen again in the years between 2007 and 2011.

Model calculations by the University of Leeds and the KIT Institute of Meteorology – Atmospheric Trace Gases and Remote Sensing (IMK-ASF) have confirmed the results – and found the causes of the rise. There has not been an increase in the total amount of chlorine in the atmosphere, but the flow system in the northern part of the stratosphere, which carries air from the equator area into high latitudes, has slowed down slightly. “As a consequence, CFCs stay in the stratosphere for a longer period of time, and more noxious chlorine gases, such as HCl, can be released,” explains Dr. Thomas Reddmann of IMK. The reason for the change in circulation was not yet known. The scientists assume that this is a long-term variability, but a connection with climate change could not be excluded completely.

The scientists found no indication that new substances dangerous to ozone and not yet included in the Montreal Protocol entering the atmosphere are responsible for the increase. “The Montreal Protocol is effective. We can confirm this in our observations and models, even though occasional fluctuations in atmospheric flow can give rise to a temporary increase in ozone killer substances,” explains Dr. Thomas Blumenstock, IMK. “The network and the sensitive measuring instruments would enable us to detect new ozone killers. However, we can assume at present that the ozone layer will be restored 50 years from now.”

The scientists use infrared spectrometers for their measurements. These tools allow the type and amount of airborne substances to be determined from their attenuation of solar thermal radiation. The KIT is one of the leading institutions in the world employing this equipment for air measurements. Three spectrometers involved in this study are operated by German research institutions. Besides the KIT, these are the University of Bremen and the Alfred Wegener Institute Helmholtz Center for Polar and Marine Research at Bre-merhaven. The IMK-ASF has employed spectrometers since the 1990s in cooperation with Swedish scientists in Kiruna, and in cooperation with the Spanish Weather Service, AEMet (Agencia Estatal de Meteorología) at Izaña, Tenerife. Other participating measurement stations of the international “Network for the Detection of Atmospheric Composition Change” are located on Spitzbergen, Greenland, Switzerland, Japan, Australia, and New Zealand. The observed increase in HCl by up to three percent per annum was found only in stations on the northern hemisphere, not so in the southern hemisphere where, in fact, a faster decrease is more apparent.

Living conditions on earth have changed in the 21st century as drastically as never before. This imposes major challenges upon climate and environmental research. With more than 650 scientists and more than 30 institutes, the KIT Climate and Environment Center develops strategies and technologies to protect the natural foundations of life.