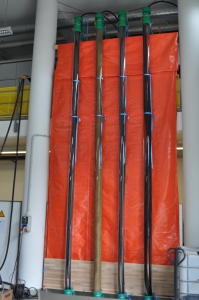 Using test setups of 6 m in height, the researchers analyze the quality of backfilling of geothermal probes. (Photo: Julian Rolker/Solites)

Soil settlements or upheavals and resulting cracks in monuments, floodings, or dried-up wells: Reports about damage caused by geothermal probes have made the population feel insecure. In fact, the probability of damage occurring in Baden-Württemberg is lower than 0.002% per year. The causes can be identified in detail and prevented by thorough quality assurance. This is the result of a study published by researchers of Karlsruhe Institute of Technology (KIT) in the journal “Grundwasser” (groundwater) (DOI 10.1007/s00767-014-0269-1).

More than 30,000 geothermal probes for shallow geothermal energy use were installed in Baden-Württemberg until the end of 2013. They allow for the sustainable extraction of heat and they help save resources and reduce energy imports and CO2 emissions. Moreover, they can be used decentrally and require little space. The probability of damage is low: According to calculations of scientists of the KIT Institute of Applied Geosciences (AGW) for Baden-Württemberg, the probability of a damage caused by drilling boreholes for geothermal probes is below 0.002% per year. “In comparison, the probability of dying from the impacts of air pollution caused by coal-fired power plants in Germany is 0.003% per year. The probability of dying in a road accident in Germany is 0.007% per year,” Manuel Grimm, scientist of the Institute of Applied Geosciences (AGW) and principal author of the study, says. The calculation is based on boreholes for geothermal probes drilled before the currently applied quality standards became valid.

The KIT researchers qualitatively and quantitatively analyzed nine cases of damage caused by drilling boreholes for geothermal probes in Baden-Württemberg, including those at Staufen im Breisgau, Rudersberg, Schorndorf, and Leonberg. For their analysis, the KIT researchers also used data from the Landesamt für Geologie, Rohstoffe und Bergbau (LGRB, State Office for Geology, Resources, and Mining), data from district offices, expert opinions, and publications.

In 90% of the cases studied, aquifers were connected by ascending or descending water flows. This was due to an incomplete, leaky backfilling of the geothermal probes. Backfilling of the cavity between the wall of the borehole and the pipes is to protect the groundwater. In nearly 70% of the cases, damage was also caused by the fact that the borehole provided for a hydraulic connection between the rock layers of Upper Trias and Middle Trias. “According to a first estimation, the probability of damage is increased by a factor of 40 when the boundary between Upper Trias and Middle Trias below is reached,” Professor Philipp Blum, AGW, says. In such cases, water entry may turn the possibly existing anhydrite into gypsum. The rock volume increases significantly, resulting in soil upheavals and cracks in buildings. This also happened at Staufen and Böblingen.

However, also geologically very heterogeneous cases can be managed in principle. This is shown by about 820 downhole heat exchanger systems in Baden-Württemberg that reach the boundary between Upper and Middle Trias. Measures to assure quality are proposed in the “Leitlinien Qualitätssicherung Erdwärmesonde” (LQS EWS, guidelines for quality assurance of downhole heat exchangers) published in 2011 in Baden-Württemberg. These guidelines also cover backfilling or the proceeding in case of aquifers under pressure. Adaptations of the design, e.g. coaxial probes, might also help prevent malpositions when inserting backfilling material. In all cases of damage known, the probes were installed prior to the publication of the LQS EWS.

Based on the study, it is now possible to establish specific criteria for quality assurance. “It is important to further develop a technology that is of high relevance to the implementation of the Energiewende and to take into account backfilling and monitoring,” Professor Thomas Kohl, AGW, explains. Ongoing and planned work at KIT, supported by the State Ministry of the Environment, focuses or will concentrate on system control and the repair of potential damage in the underground. “Further research projects are required for quality assurance to prevent damage more effectively in the future,” emphasizes Professor Ingrid Stober, AGW. “Additional measures, such as a regional limitation of the depth of boreholes, would also minimize the risk, but reduce efficiency, as the number of shorter probes to be installed would have to be increased,” Professor Philipp Blum adds.

The Karlsruhe Institute of Technology (KIT) is one of Europe’s leading energy research establishments. Research, education, and innovation at KIT foster the energy turnaround and reorganization of the energy system in Germany. For this, KIT links excellent competences in engineering and science with know-how in economics, the humanities, and social science as well as law. The activities of the KIT Energy Center are organized in seven topics: Energy conversion, renewable energies, energy storage and distribution, efficient energy use, fusion technology, nuclear power and safety, and energy systems analysis. Clear priorities lie in the areas of energy efficiency and renewable energies, energy storage technologies and grids, electric mobility, and enhanced international cooperation in research.