KIT scientist is awarded euro 100,000 for his work on optical communication technology enabling even faster and more energy-efficient data transmission. 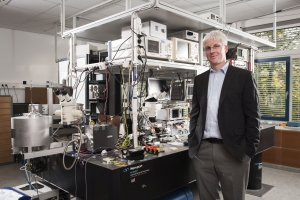 Professor Christian Koos of the Karlsruhe Institute of Technology (KIT) is awarded this year’s Baden-Württemberg State Prize for Applied Research. Minister for Science, Research, and Art, Theresia Bauer, made the announcement in Stuttgart today. Koos conducts research on nanophotonic components and novel techniques of optical high-speed communication. Together with colleagues of the Ecole Polytechnique Fédérale de Lausanne (EPFL) he and his team succeeded in transmitting a data stream of 1.44 terabit per second – corresponding to the data volume of more than 100 million telephone calls – using a miniaturized frequency comb as an optical source.

“Optical high-speed communication is the backbone of information society. Professor Christian Koos’ research is an outstanding contribution to the solution of important problems of the future. The State Research Prize awarded to him is another acknowledgment of his great achievements,” says KIT President Professor Holger Hanselka.

Professor Christian Koos and his co-workers conduct research on new optical components and transmission techniques for terabit communications at the KIT’s Institute of Photonics and Quantum Electronics and at its Institute of Microstructure Technology. This work allows to miniaturize optical components and enables integration on optical microchips. “We seek to reduce to the size of current rack-filling transmitter and receiver systems to a matchbox format. This makes systems not only less expensive, but also saves electricity; our components are among the most energy-efficient worldwide,” explains Koos. Besides terabit communication in large data centers, he envisages a number of other possible applications of his components, e.g., in optical sensing and metrology or in life sciences, where optical chips are also becoming more and more important.

Christian Koos intends to spend part of the prize money on investments into equipment opening up new possibilities in nanofabrication and data transmission. In addition, he also plans to make use of the prize money as “scientific venture capital,” allowing young scientists room for creative research. “I would like to use these funds to finance work of post-graduates and post-docs who want to try out new ideas on their own,” says Koos.

The Baden-Württemberg State Ministry for Science, Research, and Art awards the State Research Prize to outstanding scientists. This most highly endowed research prize of any German federal state in the amount of EUR 200,000 is given in equal parts to one scientist each in basic research and applied research. This year’s basic research award goes to Professor Katerina Harvati-Papatheodorou, a paleoanthropologist at the University of Tübingen. The awarding ceremony will be held in Stuttgart on December 8, 2014.

Koos studied electrical engineering and computer technology at the then University of Karlsruhe (TH), now the KIT, between 1997 and 2002. He finished his diploma thesis at Massachusetts Institute of Technology (MIT). Afterwards, he obtained his doctorate at the High-Frequency and Quantum Electronics Laboratory of the University of Karlsruhe (TH), where he also did research as a post-doc. After spending two years with Carl Zeiss AG, where he was heading the technology radars for Nanotechnology and Metrology, Koos returned to Karlsruhe in 2010. Based on his research on nanophotonics and optical data transmission, the 36-year-old scientist was awarded a series of prizes and grants over the last years. In 2011, Koos obtained an “ERC Starting Grant” in the amount of EUR 1.5 million by the European Research Council. One year later, he won the Alfried Krupp Prize for Young University Teachers, which is endowed with 1 million euro. Christian Koos has authored and co-authored more than 200 publications in scientific journals and conference proceedings, more than 140 conference presentations, and more than 20 patent applications. The editors of the “Capital” business magazine repeatedly voted him among the “40 top talents in politics, industry, science.”