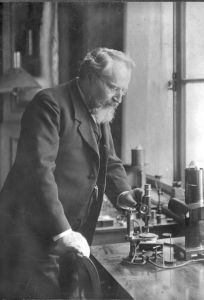 Otto Lehmann and one of his microscopes. The liquid crystals he studied are applied in digital displays and LCD screens today. (Photo: KIT Archives 27059, 8)

Flat-screen TVs, digital and mobile phone displays are common technologies today. The liquid crystals inside allow for a flat and energy-efficient construction of these modern devices. The basis of liquid crystal research that turned out to be most useful in our computer era was laid exactly 125 years ago by the physicist Otto Lehmann in Karlsruhe. On October 25, 1889, Lehmann presented the first systematic scientific results about the new class of materials of liquid crystals in the Journal for Physical Chemistry.

“Otto Lehmann, a highly committed researcher, teacher, and communicator, is a role model also in our times,” Professor Holger Hanselka, President of KIT, says. “Trusting in his experimental results, he constantly faced scientific and public discourse and opened a new chapter of materials research.”

Research of Lehmann concentrated on the physics of molecules and their interaction during the melting and solidification of matter, i.e. in the transition areas of the liquid, solid, and crystalline states. In 1888, he was told by the Austrian botanist Friedrich Reinitzer, Prague, that certain organic substances simultaneously exhibited properties of a liquid and a solid. As this behavior was inconsistent with the then accepted doctrine, Lehmann studied this phenomenon extensively. On October 25, 1889, he published his first experimental results and physical interpretations. The next 30 years of Lehmann’s work were dedicated to liquid crystals. Lehmann developed the necessary scientific instruments, such as the heatable crystallization microscope, that allowed for a large number of individual observations while the time and material expenditure was reduced.

“His means of observation were the most modern ones at that time, they were comparable to today’s electron microscopes or synchrotron sources,” explains Peter Knoll, extraordinary Professor of KIT and Chairman of the Otto Lehmann Foundation. “Therefore, it is not surprising that many of his colleagues could not reproduce his results.” Today, it is known that the properties of liquid crystals can be explained by the elongated shape of the organic molecules and the weak forces among them. Although the forces ensure loose bonding as in liquids only, the “cigar shape” allows for an ordered, crystalline arrangement similar to that of matches in a box.

Between 1900 and 1910, the conception of matter having a state other than the three known since the ancient times, i.e. solid, liquid, or gaseous, caused fierce discussions of the experts. Meetings were called to decide on the nature of liquid crystals. Lehmann frequently was the target of partly fierce criticism. In the end, however, his research was granted high importance. This is reflected by a statement of the member of the Nobel Committee, Carl Benedicks. After the death of Lehmann in 1922, he wrote to Lehmann’s son: “I consider his [Lehmann’s] work the currently most important scientific achievement in the area of physics and chemistry that did not gain the recognition of a Nobel Prize.”

“In the 30 years of his work in Karlsruhe, Lehmann initiated many further activities,” Klaus Nippert, Head of the KIT Archives, reports. As the Head of Institute, he campaigned for the construction of a new building for the Physical Institute and in 1893 already did he support the establishment of an Electrical Engineering Institute. He complemented lectures by presenting experiments in the lecture hall. His textbooks were standard literature for a generation of physicists. In the Karlsruhe Scientific Club, he made many public presentations. In 1921, he even presented his research on liquid crystals in a documentary film for German cinemas. In his inaugural speech as Rector of the then Karlsruhe Technical University in 1900, he spoke in a rather visionary way about the coming energy scarcity and the possibility of replacing lignite by solar energy in his speech entitled “Physics and Politics”.

“Without Lehmann, today’s digital displays would be inconceivable,” Knoll says. Liquid crystal displays can be found in a variety of applications. It started with digital clocks in the 1970s and continued with displays in household appliances and first flat screens in the 1990s. Liquid crystals allowed for small mobile applications, such as laptops, navigations systems, and smartphones. In monitors and TV sets, liquid crystal screens replaced energy-intensive and heavy tube devices.

In liquid crystal displays (LCD), a very thin (5 -7 µm) liquid crystal layer is arranged between two glass plates. The cigar-shaped molecules are oriented parallel to the suitably treated glass surfaces and, in addition, are twisted by 90° over the depth of the liquid crystal layer. The individual image elements (pixels) are generated by transparent electrodes of the inner sides of the glass plates. On the glass plates, polarizing foils are located, whose polarization directions are vertical to each other. If light hits the liquid crystal cell, it is first polarized and then rotated by 90° by the twisted layer. It leaves the cell via the second polarizer. By applying an electric voltage, twisting of the layer inside the individual image element is eliminated and the light can no longer pass the cell. The liquid crystal layer acts like a light valve for a light source located behind and if it is controlled properly, it generates the characters and images on the display. Color is generated by thin color filters in the cell.

1889 – 1919     Professor at the Karlsruhe Technical University, successor of Heinrich Hertz

The permanent exhibition “Von der Karotte zum Flachbildschirm” (From the carrot to the flat screen) at KIT explains the history of liquid crystal research from the 19th century to date. It can be found in the entrance hall of building 30.22 directly in front of the Otto Lehmann Lecture Hall (KIT Campus South, Engesser Straße 7). It is open free of charge on working days from 9 to 17 hrs. The exhibition designed by Horst Stegemeyer (Paderborn) and Ludwig Pohl (Darmstadt) presents boards and glass cabinets with historical exhibits to illustrate the history of liquid crystal research, starting from the observations made by Reinitzer using ingredients of carrots in 1888 to the pioneer work of Otto Lehmann to first prototypes of a digital display to today’s large screens.