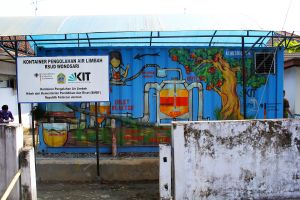 The drawing on the container of the pilot plant explains the sewage treatment taking place inside and familiarizes the inhabitants and users with the new technology. (Photo: IWRM Indonesia/Taupik Akbar)

Drinking water is scarce in the Indonesian region of Gunung Kidul. In this karst area, rainwater quickly drains away into the ground. It accumulates in an underground cave system and flows into the ocean unused. For several years now, KIT scientists in cooperation with German industry partners have developed simple technologies to extract and distribute this water under the “Integrated Water Resources Management” (IWRM) project. They also implemented solutions for water processing, quality assurance, and sewage treatment. The new technologies and concepts serve as models for other karst regions.

Under the IWRM Indonesia joint project funded by the Federal Ministry of Education and Research (BMBF), hydraulic engineering experts of KIT built an underground cave power station. For the first time, they succeeded in completely filling a karst cave with water. In 2010, they handed the cave power station over to the Indonesian authorities. The plant can supply 80,000 people with water. For the water to reach the households in a clean state via the distribution network, a team headed by microbiologist Ursula Obst, who directs the partial project for water processing and water quality assurance, developed methods for the central, semi-centralized, and local processing of water. The water from the cave is first filtered with sand in order to prevent turbid substances from entering the distribution network. In the next step, bacteria in the tap water are reduced. For this purpose, the KIT scientists established a pilot plant at the hospital of Wonosari. There, bacteria in the water are reduced among others by UV radiation and the addition of chlorine or by filtration using ceramic membranes. However, these methods require high-voltage current and, hence, are suited mainly for urban facilities, such as schools and hospitals.

“In the villages, where power is lacking, we need much simpler technologies,” Obst says. The inhabitants collect tap water and rainwater in a local open pool. ”There, animals and plants can pollute the water. We therefore recommend to cover the pool when there is no rain,” Obst points out. The scientists also installed a sand filter that retains dirt and turbid substances when tapping the water. Prior to use, the inhabitants filter the water again with the help of a clay pot that is provided with very small holes. The water released via these holes is potable. The pots are produced by Indonesian potters using local materials according to specifications made by the scientists.

For water quality control, the scientists apply a rather simple method: Users take a small water sample and mix it with an enzyme substrate, a nutrient that activates certain enterobacteria only. If these enterobacteria are contained in the water, they convert the substrate and a clearly visible yellow color develops. If the water is contaminated, the cleaning steps are checked and the filtration system is repaired, if necessary.

A sewage system is still lacking in the region of Gunung Kidul. Within the framework of another partial project, a team of KIT scientists headed by Stephan Fuchs, expert for aquatic environmental engineering, worked in the area of sewage and waste treatment. In cooperation with an industry partner, the team developed a central process for cities: Fecal matter is first collected in septic tanks – large concrete basins -. In cooperation with the industry partner, the scientists built a second pilot plant at Wonosari hospital. By a pipeline system, fecal sludge of the hospital enters a two-stage unaerobic reactor, where it is mixed with biowaste. Unaerobic means that the decomposition process takes place without oxygen. Bacteria decompose the mixture and produce among others the energy-rich gas of methane. It is then used for the gas stoves in the kitchen of the hospital. The remaining solid is applied as a fertilizer on the fields in the vicinity. “It is our vision for the future that such plants in the urban area are served by tank vehicles and that we will reach a sustainable sanitary solution,” Stephan Fuchs says.

In the villages, there frequently are no septic tanks. Toilets are located above a pit and are moved, if necessary. “In case of strong rainfall, there is a high risk of the germs entering the groundwater, especially in a karst region,” Fuchs says. “In the region of Pucanganom, we installed a system that processes toilet sewage of 15 families and the dung of their animals in three biogas facilities.” There, the organic wastes are converted into biogas and fertilizer within a period of one month. Via a pipeline system, the gas is directly passed on to the gas stoves of the neighboring houses. The remaining sludge is dried and used as a fertilizer. “At first, we had to work hard to convince the population,” Fuchs says. “It was not easy to explain that waste or even human feces can be recycled.”

The KIT scientists also conceived seminars for the operators of the plants and information material and instructions for the population. The Indonesian technicians, who are supposed to operate the plants, were provided with manuals in the English and Indonesian languages. The Indonesians are not only supposed to operate the model plants, but to transfer the technologies to other karst regions on their own.

The IWRM project started in 2002 and will be completed officially in November 2014. The project is coordinated by Franz Netsmann of the KIT Institute for Water and River Basin Management (IWG). Under the project funded by the Federal Ministry of Education and Research (BMBF), German and Indonesian partners from universities, research institutions, industry, and authorities cooperated in 19 partial projects in order to improve the development of the model region of Gunung Kidul and the quality of life of its population. In total, 34 scientists of KIT were involved. Apart from hydraulic engineers and microbiologists, geoscientists and technology assessment experts participated in the project.

Further information on the IWRM project can be found at http://www.iwrm-indonesien.de.