On the Route to Success: Five Years KIT

KIT President Holger Hanselka at the 2014 Annual Academic Celebration: “We Have Reached a Lot We Can Be Proud of.” 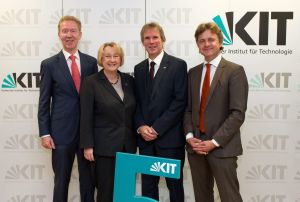 It started in 2009 as a unique “model test”. Today (Saturday, September 27, 2014), the Karlsruhe Institute of Technology (KIT) celebrates its fifth anniversary at the Annual Academic Celebration. “We have reached a lot we can be proud of,” says President Holger Hanselka. “In the area of technology transfer, we have successfully acquired federal funding for our founders forge and in the teaching sector, we recently convinced international experts of our excellent quality assurance scheme.“ Looking ahead, Hanselka emphasizes: “At KIT, we have the complete scientific chain of values added and can contribute essentially to solving the grand challenges of the future.” And he adds: “It has to be clear to everybody that a merger process is not completed after five years. But we are on the route to success!”

“With the Karlsruhe Institute of Technology (KIT), a new cooperation model was established in the German science sector. All parties involved have used the resulting opportunities well in order to be successful in the international competition of research, teaching, and innovation. I wish the KIT the same success in the next five years,” says Professor Wolf-Dieter Lukas, Department Head of the Federal Ministry of Education and Research.

“The KIT is a success story ‘made in Karlsruhe’. We are very proud of this,” emphasizes the Lord Mayor of the city of Karlsruhe, Dr. Frank Mentrup. “Science and technology are the central strengths of Karlsruhe. Of course, the international reputation of KIT is an important catalyst for our city. I congratulate all employees as well as all students on the first five years and I am looking forward to the joint future of the city and KIT.”

“The KIT established by a merger of two strong partners, the University and the Karlsruhe Research Center, appears to be on a good way,” the Chairperson of the KIT Supervisory Board, Professor Renate Schubert, points out. “Meanwhile, both parts have launched joint projects as a matter of course and employees on all levels benefit from the advantages of joint teaching, research, and innovation. I would like to thank the Presidential Committee and all KIT staff members for their high commitment.”

The KIT President extends particular thanks to his predecessors, who developed the idea of the KIT and advanced it in the first years. Thanks also go to the federal and state ministries. Without their joint efforts, the KIT would not have been possible. And Hanselka thanks all staff members and students. “They are living the idea of KIT and progress it daily.”

Five Years KIT – Outlook
With a ten-point program, the Presidential Committee intends to make the KIT fit for the next five years and to enhance the use of synergy potentials. A first important step was the adoption of the “Joint Statutes of KIT” in early 2014. These statutes describe a new integrated organizational structure and serve as a basis for the cutback of parallel processes. “Now, we want to interlink KIT’s research activities even more closely and to align them strategically. Future big challenges of the society, such as the transformation of the energy system, can only be solved by the different scientific disciplines in cooperation and in close dialog with politics and industry,” Hanselka says. “During this year’s reviews under the Helmholtz program-oriented funding scheme, the experts acknowledged KIT’s high scientific excellence in international comparison and we are waiting curiously for the announcement of the final funding sums that will be made in a few weeks.” According to the KIT President, KIT will then proceed from this high level. “We have just launched the KIT 2025 project to develop an umbrella strategy for the complete KIT. This umbrella strategy will cover all areas of research, teaching, innovation, and administration and will give all 125 scientific institutes and 29 service units of the KIT increased planning security. From mid-2015, this strategy is planned to be implemented. We are facing a big task,” Hanselka says.

5 Years KIT – Looking Back
The KIT Vice President for Research and Information, Professor Detlef Löhe, looks back on the beginnings of the KIT, starting with the daring idea of establishing the KIT. It was followed by approval under the Excellence Initiative I, politics setting the course, success, but also by the disappointment in Excellence Initiative II. As a member of the first project team, Löhe was significantly involved in the successful formulation and implementation of the KIT idea. An overview of the development of KIT based on characteristics and milestones in the areas of research, teaching, and innovation is given at the end of this press release under “Annex and Short Overview: The Effects of KIT Foundation”. Further information on the history of KIT is available at: http://www.kit.edu/kit/english/history.php

Video portraits of the winners can be found at: http://www.kit.edu/foerdern/15668.php

Annex and Short Overview: The Effects of KIT Foundation

Interlinkage and Integration of Research: KIT scientists increasingly use the potential of the merger. In 2007/2008, 43 professors of the former university sector took part in the program-oriented funding projects of the Helmholtz Association. In 2013, this number increased to 79 professors. The number of jointly appointed professors also rose significantly (31 in 2009, 55 in 2014).

Rankings: The KIT succeeded in improving its position in nearly all national and international rankings. In the latest ranking of the Wirtschaftswoche, the KIT is the only university in Germany that is ranked in first place in three disciplines (Informatics, Business Engineering, Mechanical Engineering). Since the establishment of KIT, the number of scientific publications has increased from 3307 to 3855 per year.

Approval of KIT’s coordination of KIC InnoEnergy, a Europe-wide project in the area of energy research, is one of the first successes of the young KIT and would not have been possible without the merger. KIC InnoEnergy was initiated by the European Institute for Innovation and Technology (EIT) and is aimed at sustainably transforming the energy system for a climate-neutral Europe in 2050. Project work is carried out in cooperation with 27 renowned industrial companies, research institutions, universities, and business schools.

Success of the Energiewende will depend on the efficient and low-cost storage of energy. To study and develop the technologies required for this purpose, the Helmholtz Institute Ulm was established as a branch of KIT in cooperation with partners. The Competence E project pools KIT’s research relating to storage technologies and is aimed at developing not only efficient cells and batteries, but also low-cost manufacturing processes at a research factory.

Internationality: The KIT attracts scientists from all over the world: Since 2009, their number has increased by 30 %. Nearly 950 of the total of 6000 scientists come from abroad.

Promotion of young scientists: Already when it was founded in 2009 did the KIT emphasize the importance of promoting young scientists. For this purpose, it established an institution for doctoral students, the Karlsruhe House of Young Scientists (KHYS). Today, about 3000 doctoral students are working on their doctoral theses at the KIT. The number of completed doctorates has increased from below 400 to more than 460 every year. Four Graduate Schools, two of which are funded under the Excellence Initiative, ensure networking in the respective disciplines. About 130 master students and 90 doctoral students from 40 countries learn and conduct research at the Karlsruhe School of Optics and Photonics, for instance. The Young Investigator Network (YIN), a unique self-organized network of 50 heads of young investigator groups, offers training programs to prepare young scientists for executive tasks.

Promotion of young scientists also is in the focus of HEiKA, the Heidelberg Karlsruhe Research Partnership. This partnership with the University of Heidelberg in the areas of organic electronics; nature, technology, and society; medical technology for health; synthetic biology and correlative imaging environment started in 2011.

In May 2014, the KIT was granted the so-called system accreditation right by a group of international experts. The KIT now is one of three universities of the TU9 Association that is allowed to evaluate and approve of study programs on its own. For this purpose, an effective internal quality management system was established in the education sector.

Research-based Education – Attractive for Students: Research-based education at KIT attracts students. Within the framework of this concept, students are to be familiarized with research practice at an early stage already. Today, the KIT has 24,500 students. During their studies, these students can use and work at large-scale research facilities. Some newly developed master programs, such as energy technology, would not have been possible without the expertise of the research sector. Nearly 4000 foreign students are studying at the KIT. This is an increase by 20 % compared to five years ago.

Improved Student-Faculty Ratio: The integration of scientists working in KIT’s research sector resulted in a significant improvement of the student-faculty ratio. In 2013, the student-professor ratio was 70 to 1 – this is a much better ratio than the average of the nine leading technical universities in Germany. A recently opened learning center at KIT is one component of KIT’s efforts to offer optimum studies conditions to students.

In 2013, KIT won the final round of the competition “EXIST – Gründungskultur” launched by the Federal Ministry of Economics and Technology (BMWi). For its university-wide concept for establishing an entrepreneurial culture, the KIT was granted EUR 3 million. In total, 27 universities applied for funding. The KIT founders forge project also covers entrepreneurial education. Among others, a separate platform for funding spinoff projects was established.

In addition, successful industry partnerships and a very close company-on-campus project with Schaeffler AG in the area of energy storage systems, electric drives, and autonomous driving were established on KIT’s Mobility Campus East.

Shared instruments in the form of joint professorships and research groups with industry ensure optimal interlinkage of research and product development.