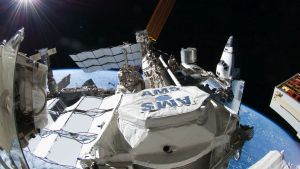 Latest results of the measurement of high-energy particles with the AMS detector on the international space station ISS provide for a deeper understanding of the origin and nature of cosmic rays. A young investigator group of Karlsruhe Institute of Technology (KIT), which is headed by Dr. Iris Gebauer, is involved in this experiment. It measured the sum flux of cosmic rays electrons and positrons. The spokesperson of the AMS project, Professor Samuel C. C. Ting, presented the results at the CERN Research Center last week.

High-energy particles reaching the Earth supply important information about the universe. To determine the original composition and energy of these particles, they have to be measured with a detector outside of the atmosphere. This is done by the AMS (Alpha Magnetic Spectrometer) particle detector that was installed on the International Space Station ISS in May 2011. AMS was developed and constructed by more than 500 scientists from 16 countries. It consists of a track detector surrounded by an annular permanent magnet. Due to the magnetic field, charged particles passing the detector are forced to follow circular paths. From their curvature, the scientists can determine the electric charge and energy of the particles.

Researchers of the KIT Institute of Experimental Nuclear Physics (IEKP) under the direction of Professor Wim de Boer participated in the development and construction of several components of the AMS detector. For data analysis, the KIT established the Young Investigator Group (YIG) “Cosmic Ray Transport Models for Dark Matter Searches with AMS-02” in 2011. This group is headed by Dr. Iris Gebauer. It coordinated the measurement of the total flux of electrons – negatively charged elementary particles – and positrons – antiparticles of the electrons of opposite charge -.

The results presented last week by the AMS project spokesperson Professor Samuel C. C. Ting are based on about 41 billion cosmic ray events recorded by the AMS detector in the past three years. About 10 millions of these events were identified to be electrons and positrons. The AMS detector measured the positron fraction, that is the ratio of the number of positrons measured to the total number of positrons and electrons, in the energy range of 0.5 to 500 giga-electron-volts (GeV). From an energy of 8 GeV, this fraction starts to increase quickly. For the first time now, the fraction was found to reach a maximum at about 275 GeV and then, it starts to decrease again. These results indicate the existence of a new source of positrons. “Collisions of dark matter particles can produce an excess of positrons,” explains Dr. Iris Gebauer, KIT. “However, positrons might also be produced by astrophysical point sources, such as pulsars, i.e. quickly rotating neutron stars.”

The researchers also used the AMS particle detector to precisely measure the electron and positron flux. This means that they determined the intensities of electrons and positrons in cosmic rays. For the first time, the measurements quantitatively revealed how much electrons and positrons differ in energy dependence and flux intensity. In the range between 20 and 200 GeV, the rate of change of the positron flux was surprisingly higher than that of the electron flux. This shows that the excess of the positron fraction is due to a relative excess of high-energy positrons that are expected to result from dark matter collisions or pulsars and not to the relative loss or the relative decrease of high-energy electrons. These observations prove the fundamental difference between electrons and positrons, i.e. matter and antimatter.

AMS measurement of the combined flux of electrons and positrons by the YIG of Dr. Iris Gebauer in cooperation with scientists of the Istituto Nazionale di Fisica Nucleare (INFN), Perugia/Italy, indicates the total intensity of both types of particles. “It is the most precise measurement of the electron and positron flux so far and determines the radiation flux up to energies of 1000 GeV with highest accuracy,” Gebauer reports. “Compared to the measurement of the positron flux, the energy range is doubled.” Now, the researchers can use a precision detector of 4 m in size to measure energy ranges in space that can also be accessed by large air shower experiments on the Earth’s surface. This is important for understanding cosmic rays and their sources. “Earlier experiments discovered structures in the total flux at 300 to 800 GeV, which indicated new physical effects. Our measurement shows that the total flux of electrons and positrons up to energies of 1000 GeV exhibits a smooth behavior that can be explained by an additional component of high-energy positrons,” the Head of the YIG explains.

Future measurements with the AMS detector are planned to find out whether the observed excess of positrons really results from the existence of dark matter or from astrophysical point sources. For this purpose, the YIG scientists under the direction of Dr. Iris Gebauer measure the directional dependence of high-energy positrons. “Dark matter is widely distributed, a point source is located at a certain point,” Gebauer explains.