Computer-supported Models Capture Changes of Motion Patterns. Scientists at KIT Use Them to Develop a Warning System That Recognizes Wear of Joints at an Early Stage. 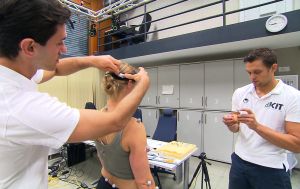 To record motions in detail, scientists attach a total of 39 markers to the body of the test person. (Photo: Willibald Müller, KIT)

Arthrosis is excessive wear of joints beyond the usual age-related degeneration. For this reason, about 150,000 Germans are provided with an artificial knee joint every year. Early diagnosis and corresponding therapies could delay or even help to avoid these operations. Joints, however, degrade slowly over several years before causing pain and prompting the persons affected to see a doctor. In cooperation with the Sana Gelenk- und Rheumazentrum (Center for Degenerative Joint and Rheumatic Diseases), Bad Wildbad, researchers of Karlsruhe Institute of Technology (KIT) are presently working on a system that detects first indications of arthrosis based on changed motion patterns.

If joints do no longer work as usual, humans tend to compensate this by unconsciously adapting their motions. In the case of knee arthrosis, for instance, they shift the weight to the healthy leg. This relieves the worn knee joint, but also delays the pain that would indicate a starting arthrosis. Wear of joints, therefore, often remains undiscovered at the early stage. “Based on a computer-supported gait analysis, we want to develop an early warning system for routine prevention,” says Professor Stefan Sell, Head of the Chair for “Sports Orthopedics and Load Analysis” of the Institute of Sports and Sports Science (IfSS) of KIT and Head Physician for Joint Surgery at the Sana Gelenk- und Rheumazentrum Bad Wildbad. “In this way, we can also develop and test gentler motion sequences for patients. At an early stage, even sports might be helpful, provided that it is executed correctly: Whoever wishes to play tennis in spite of a knee arthrosis, should keep running instead of stopping short. It will take another two years, until the early warning system will be sufficiently mature for commercialization.” 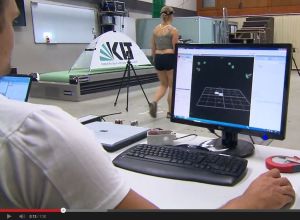 Presently, IfSS researchers are working on compiling a catalog of human motion patterns. Deviations in execution are described mathematically by the probability of their occurrence. In parallel, the sports scientists also collect motion data of patients who are already suffering from knee arthrosis. “With them we observe common features of motion sequences, which are highly improbable for healthy people,” says Andreas Fischer, who manages the project at the BioMotion Center of IfSS. In many cases, the knee angle is limited. In addition, weight is shifted much more slowly to the aching leg in order to reduce the shock when the foot is put down. In the advanced stage, this behavior is clearly visible and accompanied by pain. But already first indications can be described mathematically as a deviation from the normal probability distribution.

For motions to be analyzed mathematically on the computer, the scientists first have to image them digitally. For this purpose, they attach 39 markers to the body of the test person using adhesive tape. “It is important to mark the pivots of the joints as precisely as possible,” Fischer says. When the test person moves under infrared light, this light is reflected by the markers and recorded by cameras. On the computer, the joint markers appear as image points, with the help of which the body can be modeled. In addition, the values of two force measurement plates are recorded. If the test person walks across these plates, they measure when and where a foot touches the plate and which forces act between the floor and the test person. Light barriers in front of and behind the force measurement plates measure the average speed.

“Using these values, our calculation models can identify various motion patterns: They can determine whether somebody walks or runs, whether he moves on plane ground or climbs a slope,” Fischer says. The system can distinguish persons by their gait alone. However, this only works, if the scientists have “trained” their computer models accordingly. For this purpose, the test persons have to repeat a motion several times, such that the system can identify typical features. “In this way, our system learns how humans normally move. By comparison, deviations indicating a disease can be detected,” Fischer explains.

Dissemination of the video file or of parts of it for pedagogical, journalistic or private purposes is permitted, provided that the source (Karlsruhe Institute of Technology) is indicated. Use or reproduction for purposes other than those mentioned above or dissemination for promotional or commercial purposes is not permitted.