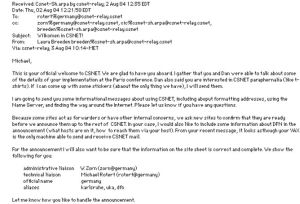 The confirmation of registration by the American CSNET was first e-mail received in Germany. (Photo: KIT)

It is the central means of communication of our times: Electronic mailing. Worldwide, short messages as well as large data packages can be exchanged rapidly and at low costs. 30 years ago, the first e-mail arrived in Germany at the then Universität Karlsruhe (TH), today’s Karlsruhe Institute of Technology. It was the first internet-based connection between the American network CSNET (Computer Science Net) and the new Karlsruhe CSNET server.

On August 3, 1984, at 10.14 hrs CET, the first direct e-mail from the ARPANET, the precursor of the internet, arrived in Germany at the mailboxes of Professor Werner Zorn, Head of the Computer Department (IRA) of the Department of Informatics, and his staff member Michael Rotert. With the words “This is your official welcome to CSNET. We are glad to have you aboard,” the US-American Laura Breeden, staff member of the CSNET Coordination and Information Center of Bolt Beranek & Newman (BBN), Boston, welcomed the new German members of the network and officially declared the German server to be available for operation.

“The first e-mail in Karlsruhe was the harbinger of an enormous technological and societal change,” says Professor Holger Hanselka, President of KIT. “Rapid communication has made our world grow together and made the exchange of ideas and perspectives across borders possible. This is a good example of research and technology transfer reaching our everyday life.”

Electronic mails had already been sent and received in Germany before August 1984, but the mail sent to Karlsruhe was the first to be addressed via the internet to a separate e-mail server that was accessible throughout Germany. Until then, users had to dial by phone into the American computers. CSNET was a computer network of various US-American universities developed in the 1980s to facilitate communication among scientists. By 1984, Germany and Israel were the first nations officially connected to the CSNET.

At that time, it was impossible to estimate how quickly the electronic mail would develop to one of the most important media of communication. Nobody even realized its economic importance. “We worked in this area for the joy of discovery and did not think of the money,” Zorn says, who has meanwhile retired as a university professor and been selected member of the Internet Hall of Fame. “Newspapers reported about it, but considered it to be an ’exotic science’.”

From August 3, 1984, Zorn, who was responsible for the CSNET service in the domain “germany” (administrative liaison, today: admin-c) and Michael Rotert, who supported the CSNET mail server (technical liaison, today: tech-c), could be reached from all over the world via the mail addresses “zorn@germany.csnet” and “rotert@germany.csnet”. The first e-mail marked the start of “electronic mailing” in Karlsruhe, a service that is used widely and as a matter of course today. The cornerstone was the project proposal “Interconnection of networks” submitted by Professor Zorn to the Federal Ministry of Research (BMFT) in late 1982 for an early connection of the planned German Research Network (DFN) to the US-American Computer Science Net (CSNET).

The CSNET funded by the National Science Foundation (NSF) was established in addition to the ARPANET that was funded by the military sector and, hence, hardly available for the public. The CSNET was supposed to enable and facilitate national and international science communication. It was the first system using communication protocols corresponding to those of the internet. Thanks to the success of the CSNET, further steps towards the NSFNET were made, which became the backbone of the internet years later. Hence, the CSNET is considered the first “internet” and it is referred to the “first German internet e-mail” to distinguish the system from other electronic communication networks that did not lead to the development of the internet.

As far as the exact time of transmission is concerned, there were misunderstandings in the past: Laura Breeden sent the electronic mail on August 2 at 12.35 hrs US-American time. It was transmitted to the server CSNET-SH and finally reached the so-called CSNET relay, in which the mails had to be collected first. Then, they had to be fetched from there by Karlsruhe. For this reason, the first e-mail in Karlsruhe bears the date of the following day and the time of 10.14 hrs.


More information on the history of the first e-mail:

Communication, energy supply, mobility, industry, health care, leisure time: Digital technologies have long been part of our everyday life, they open up new opportunities and offer solutions for problems of society. At the same time, they pose challenges. Opportunities and risks will be in the focus of the Science Year 2014 – The Digital Society. At the KIT, researchers of all disciplines study various – technical and societal – aspects of digitization. The digital press kit of KIT relating to the Science Year 2014 contains short portraits, press releases, and videos: