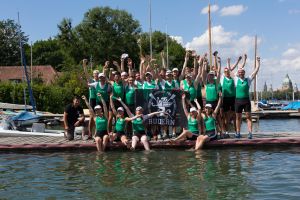 The rowing team of KIT performed well in the past years. (Photo: University Sports Association, KIT)

“This big success results from the good performance of our students and the perfect work of our volunteers and responsible staff in the past year,” Dr. Dietmar Blicker, Head of the KIT Sports Association, comments the win of the adh competition ranking. “The first place also reflects the high commitment and excellent work of the staff of both the association and the sports institute of KIT.”