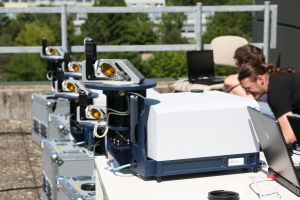 Preliminary reference measurements by Fourier spectrometers on the roof of the KIT Institute of Meteorology and Climate Research. (Photo: Dr. Frank Hase)

Scientists of Karlsruhe Institute of Technology (KIT) have developed a new method to measure greenhouse gas emission of big cities and other local sources. Now, this method is applied for the first time in a campaign in Berlin. Five ground-based remote sensing instruments are distributed around the city to measure both the increased concentrations in the plume of the city and the background concentration, i.e. the amount of greenhouse gases already accumulated in the surrounding air. From the differences, the researchers can determine the emissions of carbon dioxide and methane.

Climate warming caused by the emission of the greenhouse gases carbon dioxide and methane is in the focus of politics again. The USA and China plan to undertake more efforts to reduce emissions, for example. However, the methods applied so far are not suited for predicting the long-term development of concentrations in the atmosphere. For this and to assess potential strategies to minimize impacts on the climate, both the greenhouse gas sources and the greenhouse gas sinks, i.e. ecosystems that take up more greenhouse gases than they release, have to be determined quantitatively with high precision. This means that the amount of gases released or absorbed has to be measured accurately by the scientists of the Atmospheric Trace Gases and Remote Sensing Division of the KIT Institute of Meteorology and Climate Research (IMK-ASF).

“Precise quantification of the emission of greenhouse gas sources is difficult, because the gases remain in the atmosphere for a long time,” Dr. Frank Hase explains. He works in the group “Ground-based Remote Sensing with Fourier Transform Infrared Spectrometers” of IMK-ASF. “A certain source, such as a big city, causes a very small additional increase in concentration compared to the background. It is this small increase we want to measure.“ Established methods measure the concentration of the gases at the locations of the instruments with high accuracy. However, the data of such local measurements are dominated by sources in the direct vicinity. Moreover, interpretation of these data is difficult, as the calculated intensities of the source depend on model assumptions relating to the transport of gases through the air. Measurements of greenhouse gas concentrations at various heights on towers that are several hundred meters high allow for much more reliable statements. But these measurements are associated with a high expenditure.

This is why KIT climate researchers pursue a new approach: For the first time, emissions of a big city are measured by a small network of ground-based remote sensing instruments, namely, Fourier spectrometers. They record in the near infrared the wavelength intervals, in which carbon dioxide and methane absorb solar irradiation. This means that they analyze the extent to which the sun’s thermal radiation is weakened while passing the Earth’s atmosphere. “This is no local measurement. We determine the total amount of gases along the visual line, i.e. along the imaginary connecting line between the measurement instrument and the sun,” Frank Hase explains. The visual line, hence, corresponds to the pathway of the incident light.

The measurement campaign will take three weeks from late June to mid-July. During this time, the KIT researchers will install five Fourier spectrometers in the outskirts around Berlin. Depending on the wind direction, one of the measurement stations around the city is located in the plume and measures increased values, while the remaining stations record the background concentrations of the gases in the upstream air. From the differences of the measurement results, the emission rates of carbon dioxide and methane can be determined, if the wind conditions are known.

Prior to the application of this reliable method, the KIT scientists succeeded in improving measurement accuracy to better than 0.1 percent of the gas concentration observed. The new portable instruments were financed from the strategic investment program “Advanced Remote Sensing – Ground Truth Demo and Test Facilities” (ACROSS) of the Helmholtz Association. The instruments to be used in this campaign were developed by KIT in cooperation with Bruker Optik GmbH (Ettlingen) based on a series device. Bruker Optik has meanwhile commercialized these new instruments. First devices are now being applied by research institutions in the United States, Japan, and Australia.

To determine in advance potential instrument-related deviations of the measurement data of the spectrometers to be used in Berlin, the KIT climate researchers carried out simultaneous measurements with all devices on Campus North of KIT. Evaluation of the data measured in Berlin will take several months. Afterwards, the scientists plan to publish their results. They expect that the new measurement method will soon become firmly established, as it is not only suited for big cities, but also for other local sources, such as natural gas fields.

In the future, the IMK-ASF of KIT plans to use the portable spectrometers at other European cities and for other sources. In cooperation with local working groups, they intend to establish a worldwide network of stations. “These measurements will contribute to closing gaps in the existing global measurement networks and to understanding the carbon cycle,” Dr. Frank Hase says.