Under the SMART Project, Researchers from Israel, Palestine, Jordan, and Germany Developed Concepts and Pilot Plants for Decentralized Water Supply 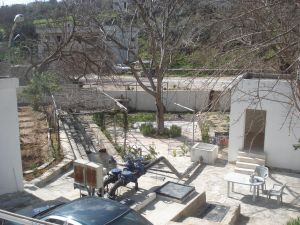 The Hazzir freshwater spring supplies parts of the Wadi Shueib region. The SMART project identified reasons for its contamination with nitrates and fecal matter. (Photo: SMART/KIT)

The lower Jordan and its feeder rivers are the lifelines of a region with more than 6 million inhabitants. Clean drinking water resources are dwindling. The International SMART project coordinated by KIT compiled data, developed concepts, and built pilot facilities to ensure water supply in the future. At the end of its duration, SMART will now present the results obtained at a scientific workshop on June 26, 2014 in Karlsruhe. Representatives of the media are cordially invited.

“In the past four years, we started to apply the research results in practice,” explains Nico Goldscheider, KIT, who coordinates SMART. In close cooperation with local authorities, pilot facilities were planned and built. In Fuheis, Jordan, a plant was constructed to demonstrate various decentralized sewage treatment technologies. Some of them have meanwhile been implemented at several local municipalities. In Karame, Jordan, a desalination facility produces about 10 m³ of drinking water per hour and additionally supplies the neighboring municipalities with water. Studies under SMART also concentrated on how seepage reservoirs can be used to store the rare, but sometimes very heavy precipitation in the geological underground. This “artificial reformation of groundwater” in natural storage reservoirs protects water from evaporating. Scientists explored suitable natural reservoirs in sediments and rock and mapped water cycles. On this basis, groundwater can be protected against contamination by unfiltered effluents and area-wide good quality of the groundwater can be ensured.

Dramatic water shortage in the lower Jordan valley among others depends on population development. The climate in the catchment area between Lake Kinneret and the Dead Sea is very dry. At the same time, population grows rapidly. “In Jordan, the population grew from about 500,000 people in 1952 to more than 6 million today. This means that 10 times more people need drinking water,” Goldscheider explains. Water demand by far exceeds the amount of water available. “A visible consequence is the rapid shrinkage of the Dead Sea. Its surface level drops by about 1 m every year.” Apart from Goldscheider’s Chair of Hydrogeology, other institutes and scientists of KIT participated in SMART. The Chair of Water Chemistry at the Engler-Bunte Institute (EBI) concentrated on the desalination of brackish water. As brackish spring water or groundwater is less salty than sea water, it can be desalinated with a small energy expenditure. Brackish water is also found inlands. Consequently, the processed water does not have to be transported over long distances, but can be supplied decentrally for drinking and agriculture.

Apart from technical and scientific work, an information campaign was part of the SMART project. Sustainable solutions were initiated by integrating the population, authorities, and decision-makers in the region. Technical solutions were incorporated in national water strategies and the socioeconomic regulations. Lessons on water for about 5000 pupils in the region were intended to provide for a basic understanding of ecological relationships. Technicians and students were trained.

Among the project partners involved in the now completed second phase (2010 – 2014) of SMART (Sustainable Management of Available Water Resources with Innovative Technologies) were the Ben Gurion University of the Negev, the University of Tel Aviv, the Palestine Al Quds University, and the University of Amman, Jordan. In addition, ministries, water supply companies, and authorities as well as local decision-makers were involved in the cooperation project. The project phase was funded by the Federal Ministry of Education and Research (BMBF) with about EUR 12.5 million. “In the future, we wish to contribute to extending the still singular projects to cover the whole area,” Goldscheider says. The third phase of the SMART project has already been applied for. Scientific workshop:
SMART II status seminar
June, 26, 2014, 8.30 – 18.00 hrs
Schlosshotel Karlsruhe, Bahnhofplatz 2